Energy resources play a vital role in the development of human civilization. The energy consumption is used as a development index. However, conventional energy resources deplete quickly and are not easily replenished, which may result in non-availability for future generations. It may be observed that the process of electricity production through fossil fuels results in harmful emissions causing environmental pollution. Furthermore, thermal power plants require significant amounts of fuel to produce a respectively lesser amount of electricity, which results in a wastage of fuel. Additionally, thermal plant maintenance and operating costs are also higher than other conventional plants. In contrast, hydroelectric plants emit less greenhouse gases, but require a huge investment for infrastructure and dams. Another available option is the use of nuclear energy sources as a replacement of fossil fuels as they release large amounts of energy. However, a significant challenge presents itself in terms of the treatment of the nuclear waste. If not treated properly, this waste may result in irreparable damages to living beings and the environment.  Renewable sources, for example, hydro, wind, biomass, tidal, and solar are accessible at zero pollution level. Renewable energy sources (RES) offer solutions to the different challenges of using conventional sources by establishing cost-effective and reliable energy systems. To understand the effect of increased RES network in the existing grid, it is necessary to understand nature of electricity generation from conventional as well as RES. 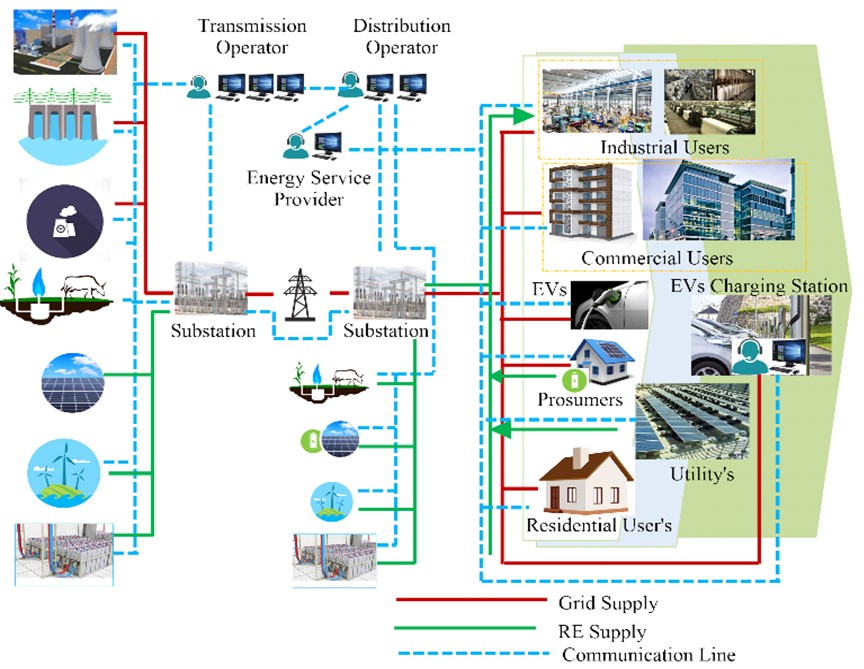 Smart Grid is an efficient way of integrating RES, storage, and intelligent communication technology devices at the generation station as well as the distribution network, as shown in Figure 1. It is an option that provides a platform for system operators, service providers, and consumers to interact with each other, which is called the energy market. The concept of a centralized wholesale energy market supports prosumers (consumers that become producers) to participate in the energy market. This may be accomplished while sharing surplus amount of energy produced to the grid. However, in the present smart grid structure, per-unit cost of energy from RES, aside from hydro and wind, is moderately higher than conventional sources. In the future, innovations in technology and economies of scale are cutting down the cost of generation. Smart grid is a solution to mitigate conventional power challenges, but it still faces few hurdles of its own. Integration of RES and corresponding coordination is a challenging issue for a smart centralized grid due to the intermittent nature of RE. Another challenge, specific to solar power is if consumers do not have PV panels, they cannot benefit from the present energy system.  Additionally, at present, grid prosumers do not fully support the grid for balancing, as there is no facility to sell the surplus energy directly in the local community for prosumers. So, the price does not reflect on the availability of renewable energy in the centralized wholesale market.

The residential microgrid is a solution to the above challenges. It is a mini-grid that consists of grid supply, PV, controllable load, distributed & centralized storage. Scheduling of electricity consumption by the shiftable & non-shiftable load, reduction in electricity per unit price, and increment in the utilization of distributed energy resources are the primary aim of this grid. Additionally, coordination among users in the smart community can become a new research line in the residential grid. The concept of energy sharing between more than two users is also interesting, which is a part of the smart community's economy. In the residential grid, energy storage systems (ESS) is a down-to-earth solution to mitigate the power fluctuations in energy generation and reliability enhancement. Moreover, the distributed energy storage system (DESS) is a common type of energy storage used in residential microgrids. Each user deploys their own storage with a photovoltaic system (PV). However, the nature of consumers' electricity consumption is subjective and arbitrary. Therefore, fixed capacity storage does not adapt to the consumption pattern of the consumers. In addition, it does not support the use of surplus PV generation due to space limitations and expensive installation process, which is fully paid by the user, so it is not economically attractive. Therefore, the decentralized layout of DESS increases difficulties in communication between the users and system operators. In addition, as the number of DES increases, the system will face higher operational difficulty in decision making and coordination between users.

For this reason, it is essential to provide an alternative solution to the problems by integrating both constraints associated with investment costs and benefits for residential consumers/prosumers to support the local utility. A new concept called a centralized energy storage system (CESS), which is centrally controlled to fulfil the requirements of individual consumer or prosumer while effectively utilizing the limited capacity of DESS. It is motivating for prosumers to participate in the local energy market and interact with each other. Here, CESS becomes a large utility that can directly communicate with the local electricity market. Thus, the overall architecture of future power systems is as shown in Figure 2. The main difference between Figure 1 and Figure 2 is that in Figure 1, there is no centralized storage in the local residential community and consumer, prosumers, and utility grid do not interact with each other. There are three major sections for CESS: (1) Users, (2) Community energy storage operator, and (3) PV utilities or prosumers. The main condition of this architecture is that prosumers do not have installed any storage at premises. Users subscribe to the service given by the CES operator, which means users take a specified space of centralized storage according to their demand and pay a service fee to the operator. Another feature of this system is that the prosumer and the consumer have provisions to share their rented space with other users to increase their economic benefits. However, current structure may also face some challenges as the initial rate of investment cost is very high for operators. 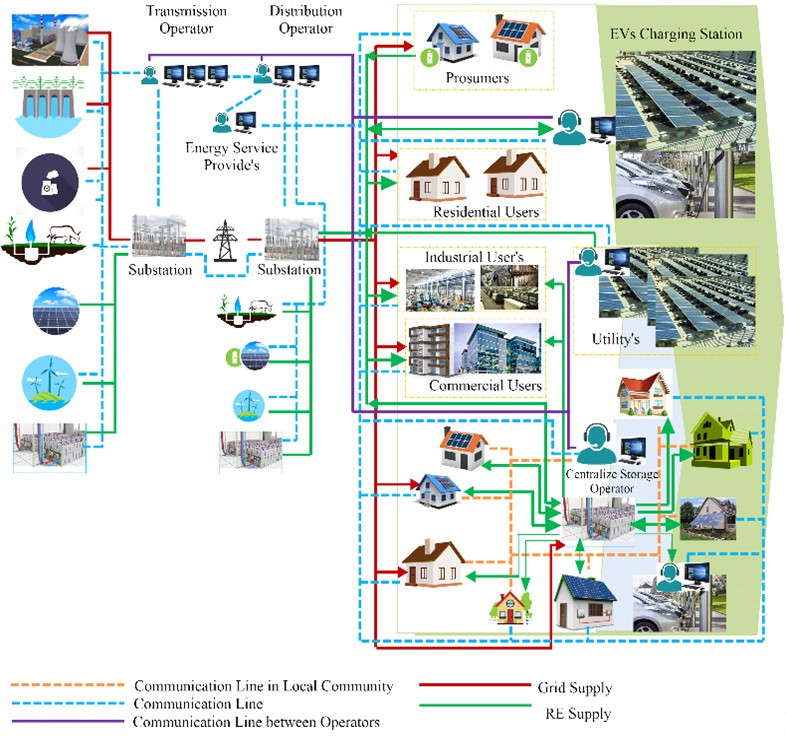 For a downloadable copy of the April 2021 eNewsletter which includes this article, please visit the IEEE Smart Grid Resource Center.

Anita Seervi received B.Tech. (Hons) degree in Electrical and Electronics Engineering from the Govt. Women Engineering College, Ajmer, India, in 2019. Currently she is pursuing M.Tech in Renewable Energy from Malaviya National Institute of Technology (MNIT), Jaipur, India. Her research field is energy storage management for prosumers as well as consumer in Smart Grid.

Rajesh Kumar (M’08–SM’10) received the B.Tech. (Hons.) degree in Electrical Engineering from the National Institute of Technology (NIT), Kurukshetra, India, in 1994, the M.E. (Hons.) degree in power systems from the Malaviya National Institute of Technology (MNIT) Jaipur, Rajasthan, India, in 1997, and the Ph.D. degree in power systems from the University of Rajasthan, Rajasthan, India, in 2005.Since 1995, he has been a Faculty Member with the Department of Electrical Engineering, MNIT Jaipur, where he is currently associated as a Professor. He was a Postdoctoral Research Fellow with the Department of Electrical and Computer Engineering, National University of Singapore (NUS), Singapore, from 2009 to 2011. His research interests include theory and practice of intelligent systems, computational intelligence, and applications to power system, electrical machines, and drives.