The increase in distributed energy production from renewable energy sources (RES) is leading to a change of the power grid with generation closer to consumption centers but at the same time, requiring new measures to ensure stability and security of supply. Recently, EU (European Union) has defined the concept of “Renewable Energy Community” (REC) as an innovative model through which end-users can share energy produced from renewables [1]. Battery Energy Storage Systems (BESS) and controllable loads are usually associated to these communities for maximizing end users’ energy self-consumption. Nevertheless, from a systemic point of view, it is very important to assess the effects of changes in power profiles at the nodes which renewable energy communities are connected to.

These considerations take on greater importance when dealing with RECs on small islands, not supplied by the transmission lines. Indeed, as these islands have a weak electricity system, they are subject to higher voltage and frequency variations as supplied by renewable sources or load demands change. A REC is usually managed with the sole objective of sharing the energy produced by renewable generation plants without any grid-related constraints. However, where the grid is not strong, weak management of flexible resources (especially in a scenario of widespread deployment of the REC model and in combination with PV generation) could contribute to unacceptable variations of power system parameters that would lead to tripping of the interface protections and the disconnection of distributed generation.

This leads to two questions: Is the installation of RES plants due to the spread of the REC model able to jeopardise the security of an island microgrid? And, in this case, how can smart grids support the spread of REC in small islands? We have tried to answer these questions by examining the case of the Italian island of Pantelleria, located in the south of Sicily. The island has a daily load profile characterized by wide variations between the winter and summer periods (with high tourist numbers) and with a minimum power demand in the early morning hours and a peak load in the evening (Figure 1(a) - Scenario 0). The decarbonization objectives for the Italian minor islands require that 2.7 MW of renewable energy plants be installed on Pantelleria in the next few years [2]. If these were all photovoltaic plants, the power profile of the island would change as in Figure 1a (Scenario 0 and 1). 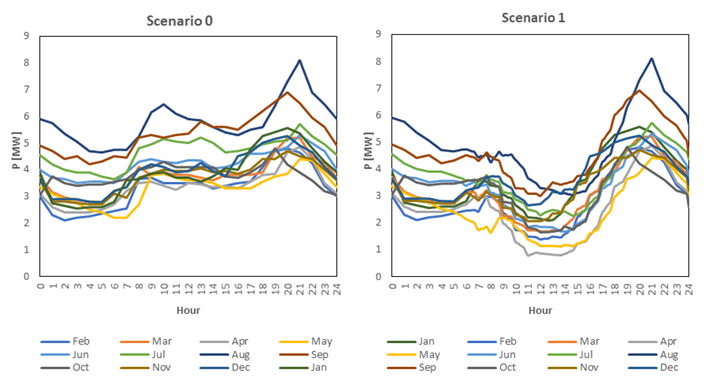 By examining the daily power profiles of Scenario 1, it can be seen how the installation of PV systems leads to a significant reduction of the net load in the mid hours of the day and to severe evening power ramps (duck curve effect) [3]. The inertia of the microgrid is considerably reduced during the maximum PV production period and the grid becomes more sensitive to disturbances. In a few months, traditional production does not even reach 800 kW at its lowest point. We therefore conducted a study to see if the installation of storage systems in RECs in order to maximize shared energy would improve the situation. By examining the buildings and the related technical installation equipment on the island, it has been estimated that, in the urban center, RECs can be built to which it is possible to associate up to 1280 kWh of bi-directional electrical storage. The capacity of the storage has been evaluated as the optimum size to maximize the economic benefit of the RECs during a reference period of one year.

Assuming this constraint as Scenario 2 and appropriately controlling the storage systems, the load diagrams of Figure 1(b) - Scenario 2 are obtained. Results show that the presence and the control of the storage system just slightly improve the daily load profile by increasing the minimum consumption by about 2%. It is worth to highlight that the total REC load in Scenario 2 represents 20-30% (depending on the month) of the load of the island and that the BESS has been sized without considering the needs of the grid. 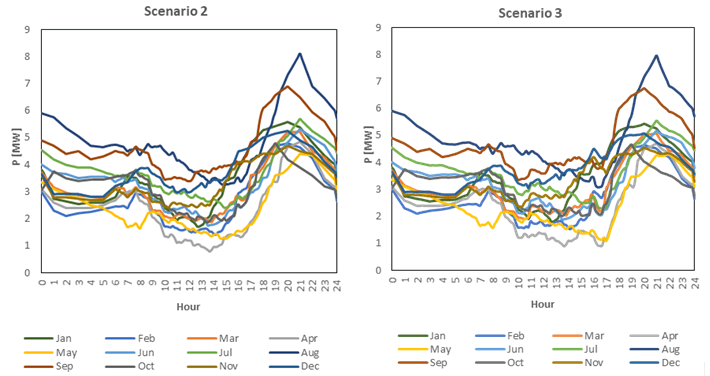 A way to increase the minimum load is to control other distributed resources with the aim of increasing the demand during the central hours of the day. Since small islands in Italy, including Pantelleria, are characterized by the widespread presence of electric storage water heaters (with volume of 50 to 100 liters), a smart management of them can be utilized for increasing the minimum load. Indeed, by increasing the set-point temperature of the water from 60°C to 80°C only from 9 a.m. to 5 p.m., the water heaters are switched on during the hours of maximum production from photovoltaics and then delayed in the evening. In fact, high density thermal storage of water allows it to keep high temperature to be used for a longer period without further switching on of the water heaters. This results in a further increase in minimum power, a reduction of the evening power peak and a reduction of the afternoon power ramp, as shown in Figure 1(b) - Scenario 3.

Table 1 shows the most significant parameters of the four examined scenarios: the peak and minimum power and the load factor of the load profile (rated between average power and maximum power in a day). The data has been averaged over the course of one year. The values in Table 1 show that the installation of a large PV system can severely impact on the load profile of the island. Effective control of batteries and storage systems can slightly improve the situation by increasing the minimum load and decreasing the power peak, thus improving the load factor.

This smart management is useful but, as demonstrated by the numbers, still not enough to restore the more stable situation prior to the installation of the PV systems, which will require the control of other shiftable loads (dishwasher, washing machine, etc.) or an appropriate scheduling of electric vehicle charging at off-peak times. In all cases, RECs need to be integrated into a smart grid system and provide, alongside flexible resource management to maximise shared energy, a parallel management to mitigate the duck curve effect in the isolated grid.

This article was edited by Mehrdad Rostami.

To view all articles in this issue, please go to April 2022 eBulletin. For a downloadable copy, please visit the IEEE Smart Grid Resource Center.

Gaetano Zizzo is an Associate Professor at the Engineering Department of the University of Palermo. He got his M.Sc. and Ph. D. degrees in Electrical Engineering at the University of Palermo in 2002 and 2006, respectively. Since 2007, he has been working with the Power System group of the Engineering Department at the same University, and in 2020, he qualified as Full Professor of Power Systems. He is currently serving as Associate Editor for IEEE Access and as Secretary of the IEEE Italy Section.

Biagio Di Pietra received the M.Sc. degree in electrical engineering and the Ph.D. degree in technical physics at the University of Palermo. He has been a Researcher with a permanent contract at ENEA Italian National Agency for New Technologies, Energy and Sustainable Economic Development since 2004. His current research interests include building model, electric grid, and district heating energy efficiency, solar thermal plants, and electric storage energy efficiency.

Rossano Musca received M.S. and Ph.D. degrees in electrical engineering from the University of Palermo, Italy, in 2007 and 2010, respectively. From 2011 to 2018, he has been with Busarello + Cott + Partner AG, where he was responsible of the Dynamic Analysis module of NEPLAN. From 2018, he has been a researcher at the University of Palermo. His current research interests include power systems design, frequency regulation, and stability analysis.

Mauro Galluzzo received his Bachelor's Degree in Energy Engineering at the University of Palermo in 2019 and his Master Science Degree in Electrical Engineering at the same University in 2022. He developed a Master's experimental thesis in collaboration with ENEA "Italian national agency for new technologies energy and sustainable economic development" on Renewable Energy Communities in small islands.