There is a number of initiatives to integrate nuclear and renewable technologies to provide high-performance energy systems with maximum utilization of nuclear power plant resources as well as to achieve balanced energy generation to meet load profiles and demands. However, there is a number of challenges to achieve practical and profitable Nuclear- Renewable Hybrid Energy System (N-R HES), such as scalability, capital cost, project lifetime, construction period, land acquisition, ecological safety, and technological barrier. There are possible ways to overcome some of the challenges of N-R HES by introducing small scale nuclear reactor, called Small Modular Reactor (SMR) or Micro Modular Reactor (MMR). The Nuclear-Renewable Micro Hybrid Energy System (N-R MHES) offers to combine the small scale of Nuclear Power Plant (NPP) with Renewable Energy Sources (RES). The byproduct of the N-R MHES, the thermal energy, is also used in an efficient way to support the thermal load, district heating, hydrogen production plant, heat engine, absorption chiller, etc. The N-R MHES offers the possibility of different coupling options between input and output of the system. The nuclear- renewable integration criteria depend on the availability of the RES and the consumer load demand. The N-R MHES fits best to the remote consumer having an adequate amount of electric and thermal load. The grid-connected N-R MHES provides the opportunity to purchase the electricity in case of emergencies and to sell the surplus energy of the N-R MHES to the grid. In case of unavailability of the grid, an energy storage system can be used to store the surplus energy.

There are mainly four types of coupling method in nuclear-renewable integration: 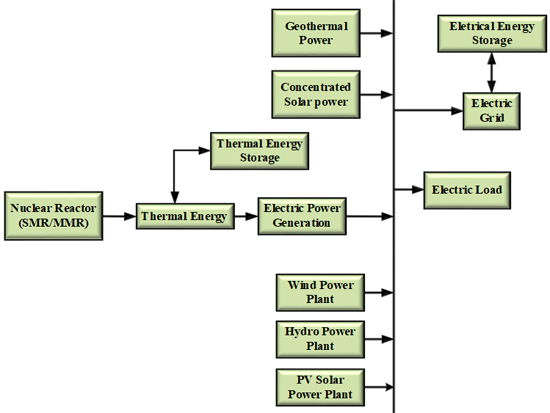 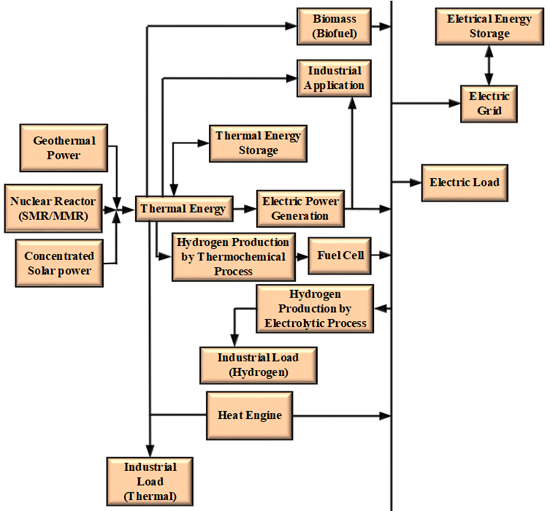 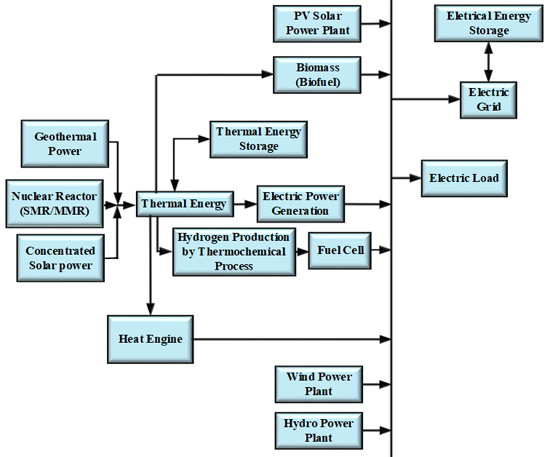 In tightly coupled method, all form of energy mixes with each other for maximum utilization of the available energy in the N-R MHES. All thermal energies are added together and all electric energies are combined together; then all forms of energy are used in the most efficient way. The available thermal and electric energy is used in all possible applications, such as seawater desalination plant, fuel cell, district heating, heat engine, calcination, etc. 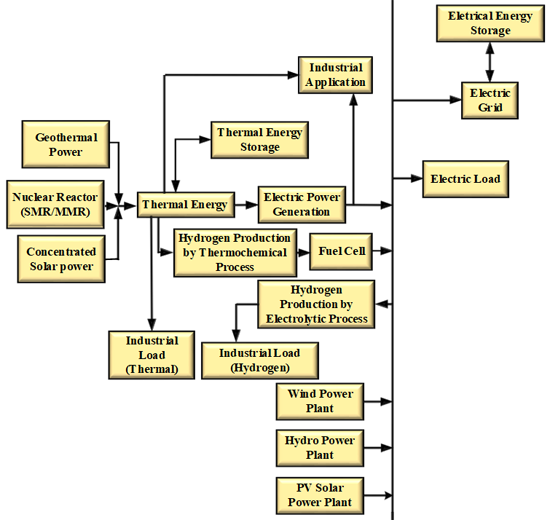 A hybrid system may not include all types of RES. The heat generated from N-R MHES is generally used for the industrial purpose; whereas, the generated electricity from the hybrid system is used to support the electric demand. The surplus energy produced from the system can be supplied to the grid and remunerated by “net metering”. If necessary, electric energy can be drawn from the grid and combined with the heat to support the industrial load (e.g. hydrogen demand). Advanced energy storage system plays a very important role in the N-R MHES. A dynamic control strategy is adopted in the N-R MHES to maximize the efficiency of the system.

For a downloadable copy of August 2019 eNewsletter which includes this article, please visit the IEEE Smart Grid Resource Center.

Dr. Hossam A.Gabbar is Professor in Ontario Tech University (UOIT) in the Faculty of Energy Systems and Nuclear Science, and cross appointed in the Faculty of Engineering and Applied Science. He has established the Energy Safety and Control Lab (ESCL). He is the recipient of the Senior Research Excellence Aware for 2016 with more than 220 publications. He is leading national and international research in the areas of smart energy grids and resilient transportation electrification. Dr. Gabbar obtained his B.Sc. degree in 1988 with first class of honor from the Faculty of Engineering, Alexandria University (Egypt). In 2001, he obtained his Ph.D. degree from Okayama University (Japan). From 2001 till 2004, he joined Tokyo Institute of Technology, as a research associate. From 2004 till 2008, he joined Okayama University as a tenured Associate Professor. From 2007 till 2008, he was a Visiting Professor at the University of Toronto.

Muhammad R. Abdussami is a graduate research student at the Faculty of Energy Systems and Nuclear Science, University of Ontario Institute of Technology, Canada. Currently, he is doing an M. A. Sc. on nuclear-renewable integration system. He holds a bachelor degree in Electrical and Electronic Engineering from Islamic University of Technology, Bangladesh. He is very excited about the innovation of Nuclear-Renewable Micro Hybrid Energy Systems. His research interests include Nuclear Power, Renewable Energy, Smart Energy Grid, Nuclear-Renewable Integration Systems, and Advanced Energy Storage Systems.