With the new edition of IEEE Standard 1547TM approved in 2018 and certified inverters emerging into the market, there is an increasing need to have accurate distributed energy resource (DER) models to support proper assessment of DER impacts on power systems. The Electric Power Research Institute (EPRI) has released an open-source distributed energy resource (DER) model, OpenDER, which aims to represent the functional definitions and requirements of IEEE Standard 1547-2018. It can be used to analyze steady-state and dynamic behaviors of DERs for planning and interconnection studies. EPRI has also released a publicly available model specification document, which complements the OpenDER model software to help the industry properly understand and utilize this open-source model and/or develop their own model rapidly and accurately. In addition, DER Model User’s Group (DERMUG) has been launched to review, critique, and build consensus upon the OpenDER model.

IEEE Standard 1547 [1] has been developed to define the interconnection requirements and criteria for DERs. With the growing penetration of DERs, it becomes increasingly crucial to have uniformed and standardized DER behavior, such that utilities can predict and understand DER behavior, perform analysis to quantify grid impacts, and determine how to optimize DER functions and settings to maximize the hosting capacity. The standard is supported in many cases by law for a DER to interconnect to the system.

In 2018, a new version of the IEEE Standard 1547 was approved with a significant number of additions and modifications from the original 2003 version and 2014 amendment. The new additions include multiple grid support functions such as voltage and reactive power (volt-var) control, and requirements such as low voltage ride through, that the DER must be able to provide or comply with. Many U.S. state public utility commissions (PUCs) are considering requiring 1547-2018 conformity from 2023 onwards [2].

With this new standard release, many DER manufacturers, integrators, and certification laboratories are designing, developing, and testing new products following the standard requirements. To prepare for these products, providers of distribution system planning and operational software are also updating their products with library DER models intended to represent the new performance that matches IEEE 1547-2018 certified DERs. For utilities and researchers, a DER model within simulation software that accurately represents DERs in the field is crucial for system planning and impact studies.

On the other hand, increased DER capability means increased complexity, requiring more advanced and accurate behavior models. In this regard, EPRI is developing an open-source DER (OpenDER) model, with the objective to harmonize accurate interpretations of the IEEE Std 1547-2018 among all the stakeholders, and help the industry properly model the DERs for interconnection or planning analyses, as shown in Fig. 1 [3].

Fig. 1 OpenDER development objective: Harmonizing understanding of the DER behavior among all stakeholders

The OpenDER model aims to accurately represent steady-state and dynamic behaviors of inverter-based DERs. The model follows the function definition and requirements of the IEEE 1547-2018 standard. It is also informed by the observed behaviors of commercial products through lab and field testing. This model can be used to run snapshot, Quasi-Static Time Series (QSTS), and a variety of dynamic analyses to study the impacts of DERs on distribution system.

The OpenDER model is maintained in two formats: A publicly available model specification document presenting the DER model in terms of equations and block/flow diagrams [4], and an open-source DER model software implemented in Python [5]. Both can be used as a reference by any stakeholders who want to develop their own DER models such as power system analysis tool developers, R&D organizations, consultants, and academia. In addition, the software code can be used to benchmark and validate existing and future DER models, and interface with circuit simulation tools for system studies.

Overall block diagram level representation of the OpenDER model version 1.0 is shown in Fig. 2. This model captures all grid support functions defined in IEEE 1547-2018, as well as DER enter service and grid abnormal voltage and frequency condition trip requirements. Future development of the model will include DER faster dynamics such as ride-through performances and behaviors of energy storage DERs. Because the model is being developed and documented in a modular fashion, it can be used as a whole or in part depending on needs.

In addition, a DER model user’s group (DERMUG) that is open to all interested parties, including utilities, inverter manufacturers, DER plant developers, power system analysis tool developers, nationally recognizes testing labs (NRTLs), academia, and consultants, was launched in June 2022. It is established for the industry to assess together, critique, find consensus, prioritize improvements, and refine the open-source DER model. Errors and gaps identified by the working group will be addressed accordingly as EPRI releases future revisions of the model. The OpenDER model development process and potential usage is shown in Fig. 3.

EPRI intends to maintain, improve, and expand the model going forward, and plans to include DER control functions that are required by other standards and country codes. The ambiguities and gaps in the IEEE 1547-2018 identified during the model development process will be documented and provided as input to the upcoming standard revision in 2023. 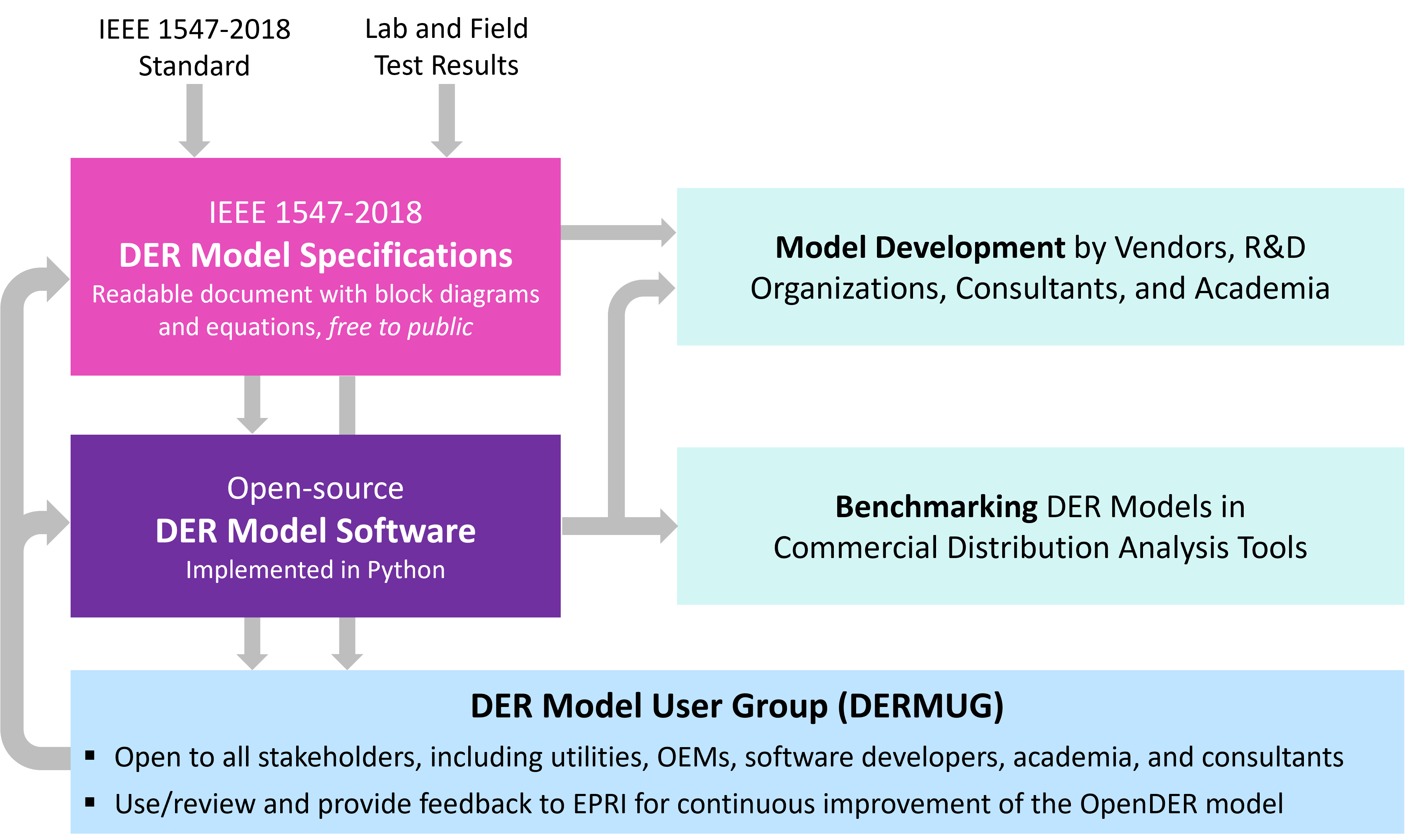 To demonstrate how the DER model details and accuracy may impact the result of system impact studies, an example case study has been conducted regarding the dynamic responses of DER grid support functions. IEEE Std 1547-2018 requires the DER to have the capability to control its reactive power in relation to voltage at reference point of applicability (RPA), also known as volt-var control. The standard includes an “open loop response time (OLRT)” requirement for the volt-var function. OLRT requirement for volt-var function includes a default duration as well as range of adjustability depending on system need.

To showcase the importance of modeling the volt-var OLRT behavior, a simplified test circuit with one voltage regulator and one DER is created, shown in Fig. 4(a). Simulation is triggered by a DER active power increase at 10s, and results are shown in Fig. 4(b). With longer OLRT, the inverter output reactive power changes slower. As a result, the terminal voltage may temporarily rise higher and trigger the voltage regulator operation, indicating that the DER OLRT performance may impact the wear and tear of the distribution equipment. The final operating conditions of the two cases are also different.

Note that the purpose of this example is only to demonstrate how DER model accuracy impacts analysis results and is not intended to provide guidance on DER or voltage regulator settings, which requires more detailed analysis. 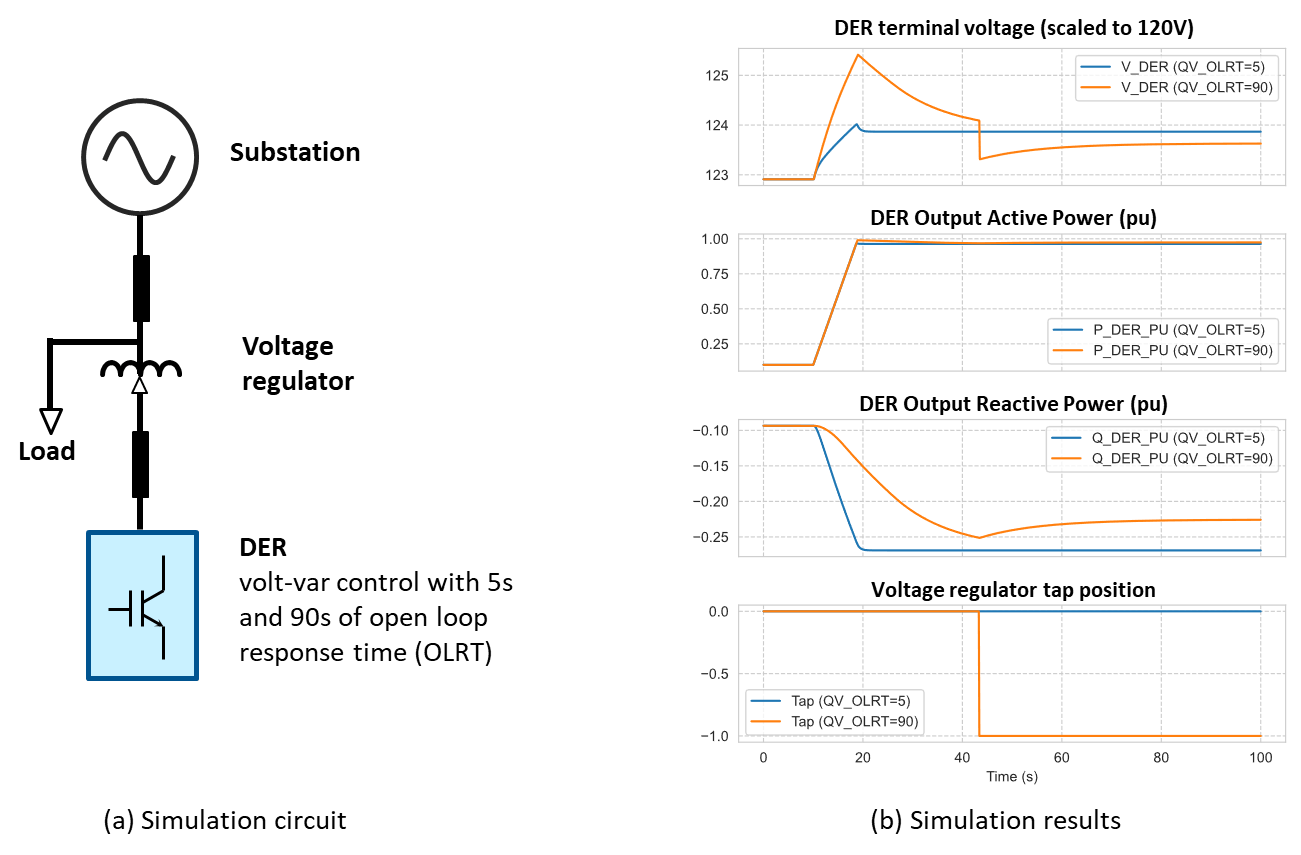 This work is sponsored by EPRI. Support from the U.S. Department of Energy, Solar Energy Technologies Office through award number DE-EE0009019 Adaptive Protection and Validated MODels to Enable Deployment of High Penetrations of Solar PV (PV-MOD) [6] for the development of the version 1.0 OpenDER model specifications is also acknowledged.

This article was edited by Mehdi Moghadasi.

To view all articles in this issue, please go to August 2022 eBulletin. For a downloadable copy, please visit the IEEE Smart Grid Resource Center.

Dr. Yiwei Ma is currently a research engineer at th Electric Power Research Institute (EPRI). His current research activities focus on testing, modeling and analysis for DER integration. Before joining EPRI, He was a research assistant professor with the University of Tennessee at Knoxville, Tennessee.

Dr. Aminul Huque is currently working as a Program Manager at the Electric Power Research Institute (EPRI). He manages smart inverter and grid support technology research at EPRI which supports safe and reliable integration of renewables on the power gird. Dr. Huque leads research projects to develop and demonstrate solution to challenges associated with higher penetration of distributed energy resources (DER), including solar Photovoltaic (PV), energy storage, vehicle-to-grid, and controllable loads. He is a key contributor of DER interconnection standards like IEEE 1547. Dr. Huque received a PhD from the University of Tennessee at Knoxville (Tennessee, USA) and an MSc from the Imperial College London (London, UK) in 2010 and 2003 respectively.