The rapidly growing levels of distributed energy resources (DER) in Australian electricity grids are precipitating some of the most significant changes in power system operation in history. The decentralisation of power generation, storage and dispatchable loads on the distribution network requires careful coordination between transmission network operators (TSOs), distribution network operators (DSOs), and emerging DER aggregators and market operators. Operating envelopes (OEs) were introduced in various trials in Australia in 2019 as a key instrument for DSOs to maintain DER operation within the technical limits of the network and to support the integration of DER services in future electricity markets. However, the calculation and implementation of OEs pose a diversity of technical challenges that encompass network and load visibility, computational scalability, managing sensitivities and uncertainties, and fair access of customers to future infrastructure and markets.

The world has seen rapid DER development in the past decade. In Australia, an estimated 3.04 million homes and businesses had installed a rooftop PV system by the end of 2021, and more than 2.88 GW and 349,000 installations were added to the power grid in the year 2021 alone [1]. High DER penetration brings many challenges to operating power systems securely and efficiently, especially in the electricity market environment.

Traditionally, most market participants are large-scale dispatchable generators and loads connected to the transmission network and dispatched by TSOs. However, with more DERs connected to power distribution networks, virtual power plants (VPPs) are emerging as a new type of market entity that orchestrates the operation of DERs via market participants such as retailers or third-party aggregators. Without appropriate TSO-DSO coordination and DER power output management, system operators may experience a lack of a sufficient quantity of dispatchable resources to operate the system securely and reliably, which may lead to minimum operational demand and network congestion issues. In recent years, several projects in Australia targeted the exploration and trial of future power system architectures to efficiently integrate DERs, including the Open Energy Networks Project [2], Project EDGE [3] and Project Symphony [4]. Operating envelopes (OEs) have been introduced as a critical enabler to ensure networks’ operational security in future electricity market operations with high penetration of DERs.

Operating Envelopes and Technical Challenges in its Calculation and Implementation

Operating envelopes define the technical limits within which customers can import and export electricity as determined by the physical constraints of their local networks [5]. Several future coordination architectures that have been suggested for DER management propose that operating envelopes are to be calculated by DSOs and shared with market participants, including aggregators and TSOs. However, in addition to architecture design and necessary infrastructure upgrades, the calculation and implementation of OEs encompass numerous technical challenges, which are briefly outlined below.

The visibility of distribution network conditions is critical to the calculation of OEs. Network data, including network topology, line impedances and customers’ phase connections, may not be available for distribution networks, which impairs the capacity to accurately calculate OEs. Hybrid approaches to estimating the network state that combine available physics-based information with ad-hoc black-box modelling techniques may be required to enable the estimation of real-time network conditions to support OE calculations. Moreover, to estimate the operational state of the entire distribution network, it is also critical to know voltage magnitudes and angles at all phases of the reference bus, which is usually the high-voltage side of a transformer, either by installing measuring equipment or by estimation.

As OEs are customer-specific and there might be hundreds of buses and also hundreds of thousands of residential customers in a large distribution network, calculating OEs can be computationally challenging, and novel approaches, e.g., distributed algorithms, may be required.

A hidden assumption in the concept of OEs is that if each customer’s electric power is within its allocated OE, the distribution network should not experience any operational issues. However, this may not be true if uncertainties in the power system are not approapriately considered when calculating the OEs. Such uncertainties may come from electric power variations and errors in forecasting powers. Taking Fig. 1 as an example, the allocated OEs for both Customer 1 and Customer 2 are 3 kW if the objective function is to maximise the sum of both OEs: max (P_1+P_2). However, since electric power variations are not considered, the two customers may not be able to arbitrarily change their exported powers without incurring network constraint violations. In other words, the OEs for the two customers are coupled together, and, for example, Customer 1 would need to decrease its power export in order for Customer 2 could export more power to the grid. To decouple the capacity limits of all customers, OEs could be restricted, at the expense of network capacity, to a region smaller than the feasible region (FR), for example, the hyperrectangle shown in Fig. 1. In this hyperrectangle, OEs are decoupled for all customers, and, consequently, more flexibility could be brought to the system operation without a need to coordinate the powers of all customers (which may require expensive communication infrastructure upgrading). Calculating the FR and seeking a suitable hyperrectangle, however, may require more effort from a technical perspective. 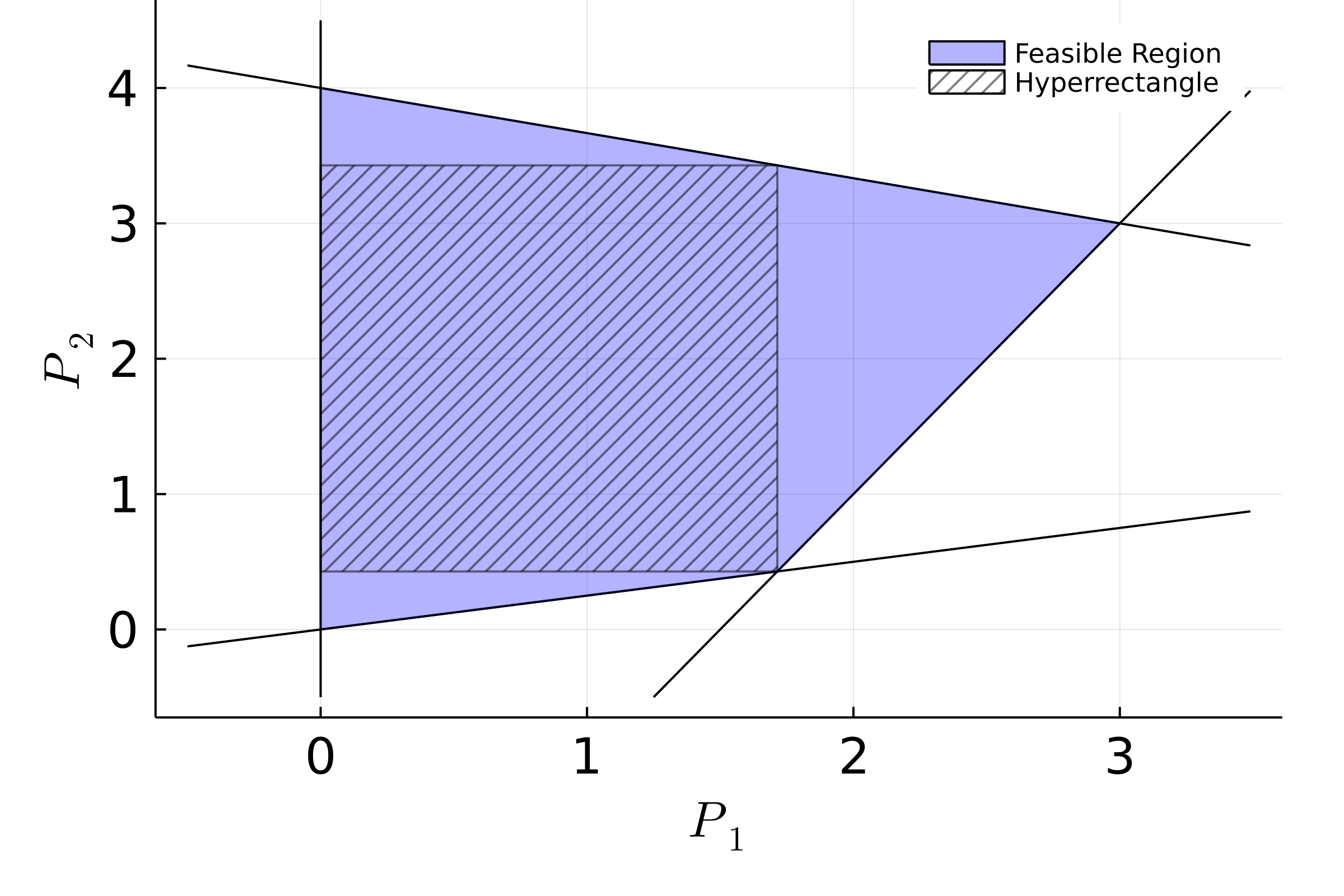 Figure 1: Illustrative example of OEs, where the Hyperrectangle is a subset of the Feasible Region for (P_1,P_2).

Regardless of the specific approach to calculating OEs, fairness in capacity allocation must be considered, noting that customers with similar installed DER capacity and demand patterns may be allocated quite different OEs depending on their locations. Achieving fair capacity allocations is not only a regulatory challenge but could also lead to technical challenges, such as designing suitable allocation rules and formulating objective functions that can capture fair allocations.

It is widely agreed that OEs provide a promising approach to facilitate DER integration in future power system operations, although many challenges remain to be addressed. Enhancing network and load visibility, managing sensitivities and uncertainties, developing computationally scalable approaches and achieving fair capacity allocation appear as the most currently pressing challenges. Addressing these challenges efficiently calls for closer collaborations between the industry and research community, such as those initiated in Australia by Project EDGE [3], Project Symphony [4], and the Global Power System Transformation (G-PST) Project [6].

This article was edited by Gabriel Ordoñez.

To view all articles in this issue, please go to August 2022 eBulletin. For a downloadable copy, please visit the IEEE Smart Grid Resource Center.

Bin Liu (IEEE Member 2019) received his PhD degree in Electrical Engineering from Tsinghua University, Beijing, China in 2015 and is currently a Research Scientist with the Energy Systems Program of the Commonwealth Scientific and Industrial Research Organisation (CSIRO) in Newcastle, NSW, Australia. He also worked as a Research Associate at The University of New South Wales, Sydney, NSW, Australia, from 2018 to 2021, a Research Assistant at The Hong Kong Polytechnic University, Hong Kong, in 2012 and a Power System Engineer in China from 2015 to 2017. His research interests include optimisation theory and its application in power systems, distribution system modelling and optimisation, and renewable energy integration etc.