Can you imagine what happens to all the excess renewables generation when you are sleeping? This surplus generation during low consumer demand leads to something called negative pricing at the wholesale energy market level. The solution - a pathway towards clean energy transportation to store all that renewable energy in the form of hydrogen using a simple chemical process called electrolysis.

A simple chemical process is providing cleaner transportation options. We all know from basic chemistry lessons that when we split water molecules using direct current, we get hydrogen and oxygen. This process is called electrolysis. This simple process produces hydrogen for transportation applications such as Fuel Cell Vehicles (FCVs). It is becoming increasingly popular because increased renewable penetration leads to negative pricing, which means the consumers are paying (because of production and investment tax credits) to produce renewables. When substantial amounts of renewables are produced at late night and early morning, electricity demand is not high. So, instead of curtailing that excess energy, it can be stored as hydrogen.

Additionally if the reader is still not convinced about hydrogen storage, an investment by car manufacturer Toyota announced in the state of California that has a mandate for "green electrolytic hydrogen." Look at this statement from the Fuel Cell and Hydrogen Energy Association (FCHEA), which implies biogas is also pitching in to produce hydrogen.

“FCHEA members Toyota and Fuel Cell Energy announced the installation of a multi-megawatt fuel cell power plant at the Port of Long Beach in California that generates not only electricity but 100% renewable hydrogen fuel onsite via biogas from dairy cattle waste. Toyota will purchase the hydrogen for its fuel cell-powered cars and heavy-duty trucks that are deployed at the port." - Morry Markowitz, President, Fuel Cell and Hydrogen Energy Association.

With increasing amounts of renewables on our electric grid, the need for hydrogen storage is only going to increase, especially when transportation consumers want cleaner fuel options. And hydrogen storage technology for fuel cell vehicles is not new. Due to FCV range, adaptability and refueling time, there is research that suggests fuel cells will dominate the auto industry.

This article’s focus is not on hydrogen storage per se; it is on negative pricing that occurs in wholesale energy markets when there is too much supply and not enough demand. And with more renewables on the grid (see Energy Information Administration (EIA) chart that shows our renewable generation doubled in the last decade), more instances of negative pricing occur. And there is a cost to the electric grid. Hence, we need an application that reduces that cost. Negative pricing provides a practical application (building high voltage transmission interconnections takes time and money, even if the industry agrees on who pays?) for clean transportation options, such as FCVs.

Let us focus on the California grid, where there is a goal of reaching 50% of its electrical needs from renewable energy by 2030. This 50% by 2030 is achievable because California is on track of meeting 33% from renewables by 2020. Solar energy installed capacity is approximately 25% of California ISO peak demand.

So what? Renewable energy production, i.e., solar, was curtailed by the Independent System Operator (ISO) in California. That happens all the time; renewables get curtailed. That's not exactly news. What is news – this negative pricing frequency has been occurring more and more in California, with more solar production and hydro energy. The hours at which this negative pricing occurs is typically between 9 am and 2 pm, in California, when the sun is shining. See California Market Monitor data for 2013, 2015 and 2017. 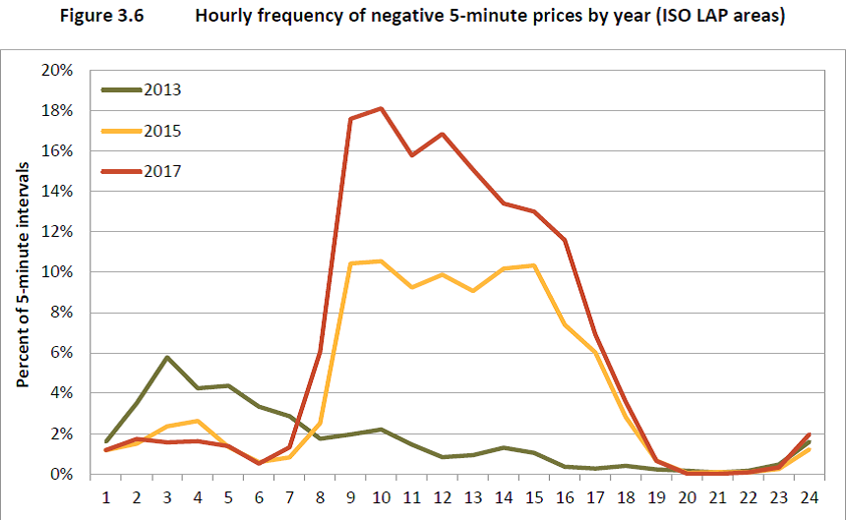 “The increase in negative prices largely reflects growth in installed renewable generation, particularly from solar resources, and increased hydro generation” - Department of Market Monitoring, CAISO. June 2018. CAISO definition for Load Aggregation Point (LAP) is, “A set of Pricing Nodes as specified in Section 27.2 that is used for the submission of Bids and Settlement of Demand”. 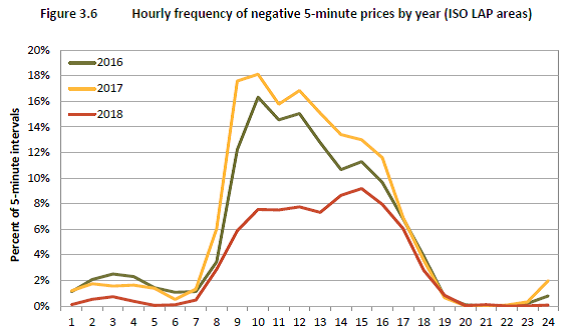 Does this negative pricing occur in California alone? No, this happens wherever there are renewables on the system and where there is price transparency due to wholesale energy market. With more and more U.S. states in organized markets taking up clean energy legislation (for example, Minnesota in MISO, New York in NYISO, and Massachusetts in ISO-NE), there will be negative pricing. And negative pricing leads to renewables curtailment because most of the renewable production occurs when demand is low. Instead of curtailing that wind or solar, using electrolysis, we can store that direct current energy in hydrogen for transportation needs, e.g., fuel cell vehicles.

And states like California are leading the industry, thereby attracting big names like Toyota. Hence negative pricing as a result of increased renewable penetration provides a clear pathway for cleaner transportation options. So next time whether you are taking a nap mid-day or going to bed at night – know that there is a transportation pathway for all that excess solar or wind.