As more variable and distributed energy resources (DER) gain market share, the relative amount of traditional generation is decreasing. One impact from the changing resource mix is loss of grid stabilizing inertia. As DER displace synchronous generation, there may be times of insufficient system inertia to 1) arrest frequency decline, and then 2) stabilize system frequency following a power system disturbance. On the other hand, there are some DER, including appropriately designed demand response and energy storage that can support power system frequency recovery, extend frequency stability margins, and thus improve overall grid reliability. However, providing grid stabilizing inertial-support using energy storage is not yet an established industry practice.

The BESS control scheme detects and then uses off-nominal system frequency measurement as an input control variable.  The other key input to implement this control scheme is rotor angle measurements from a synchronous generator or power angle from an inverter based generator. These control input measurements need time-synchronized (e.g. GPS) and relatively high resolution (30-40 measurements per second). These requirements can be met with synchrophasor technology, including Phasor Measurement Units.   The BESS uses these control inputs to modulate its power output, with the control objective of reducing off-nominal power system frequency deviations to within an acceptable range. The control concept is shown below in Figure 1.

MATLAB was used to simulate the post-fault behavior of a single synchronous generator connected to an infinite bus system, without and then with active damping BESS. The system used in this example and its relevant parameters are shown in Figure 2. For this scenario, a BESS is co-located with the generator to provide damping effect. Three transmission lines are connected between the buses.

The sequence of events for this illustrative case are:

The modeled impact illustrated in Figure 3 shows that controlled power exchange by a BESS can extend the stability support of a generator, and the resulting impact on the connected power system’s frequency stability. 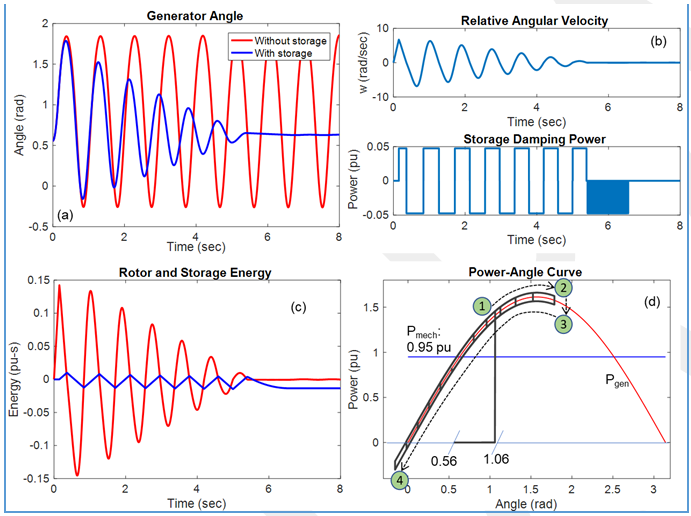 The oscillatory behavior of the modeled synchronous generator is shown in the generator angle profile in Fig. 3(a). The BESS is controlled to transfer the generator’s energy from the positive regions to the negative regions to dampen the post-fault oscillations. To obtain such response from the BESS, charging and discharging is controlled in proportion to the change in generator power angle. The resulting managed power output profile in the lower panel of Figure 3(b) shows such behavior, in relation to the generator’s relative angular velocity (ω) in the upper panel of Figure 3(b). The generator rotor energy profile in Figure 3(c) shows the oscillatory behavior mentioned above in the first frequency excursion swing, with the excursion gradually reduced by the controlled exchange of energy by the BESS. The dynamics of the damping are illustrated in relation to generator equal-area criterion in Figure 3(d). The impact of damping is evident in the stabilized power angle profile in Figure 3(a).

The overall result from imparting this form of energy storage dynamic control is an improvement in recovery of the modeled power system’s frequency following a disturbance.

The control concept described in this article is different in that the BESS control input adds generator angle measurement. The result of the model presented is improved system frequency damping impact of the integrated, or ‘hybrid’, generator plus BESS.

In conclusion, the use of this BESS controls strategy will allow BESS to improve the frequency stability of power systems, allowing power systems to accommodate relatively more renewables before hitting stability limits.

The PNNL authors acknowledge the support of the Energy Storage Program in the Office of Electricity Delivery and Energy Reliability at the U.S. DOE.

For a downloadable copy of the January 2020 eNewsletter which includes this article, please visit the IEEE Smart Grid Resource Center.

Charlie Vartanian is a Sr. Technical Advisor at the Pacific Northwest National Laboratory where he focuses on the integration of energy storage with power systems. Charlie has over 25 years of power industry experience deploying advanced grid technologies, performing electric system studies, and contributing to technical standards development. He has worked previously for Mitsubishi Electric, DNV KEMA, A123 Systems, Enron, the California Energy Commission, Southern California Edison, and the U.S. Navy. During his 15 years at Southern California Edison, Charlie’s activities spanned traditional T&D planning through grid R&D. He is a currently Secretary of the IEEE 1547.9 Energy Storage Interconnection working group, and Co-Chair of the IEEE Energy Storage Collaboration Team. Charlie received his BSEE from Cal Poly Pomona, and his MSEE from USC. Charlie is a licensed professional Electrical Engineer.

Dr Jan Alam is a power systems engineer at Pacific Northwest National Laboratory (PNNL) where he has been working since October 2016. He is a thrust-area lead within Energy Storage Industry Acceptance program at PNNL, sponsored by U.S. DOE. He is also a key-contributor in PNNL transactive energy systems and grid services valuation domains. He is managing an effort to develop capabilities at PNNL for grid integration of marine renewable energy resources. Before joining PNNL, he was engaged in solar PV and energy storage research in Australia and collaborated with multiple Australian utilities. Dr Alam also worked as an electric power industry professional in Bangladesh (2005-2010) and held various positions from plant maintenance engineer to consulting engineer working with the government agencies responsible for power sector development.

Eric Hsieh is the Director for Grid Systems and Components at the U.S. Department of Energy. His group conducts cutting edge research and development for new grid hardware technologies, including energy storage, robotics, and power electronics. He previously held positions at Nexans, A123 Systems, and the Federal Energy Regulatory Commission (FERC). Eric received degrees in Public Policy from UC Berkeley and Computer Science from MIT, and was recently named a “young and rising star” by Public Utilities Fortnightly.