The excessive CO2 emission has resulted in major challenges for the development of a sustainable human society. CO2 emissions contribute to the climate change and global warming, and the recurrent of more intense natural disasters (e.g., hurricanes, floods, fires, ice storms). Fossil-fueled power generation contributes to over 40% of hazardous emissions globally, and proper mitigations of CO2 emissions can intensify the decarbonization of our communities.

Carbon capture and storage (CCS) technology is one of the most promising options in reducing the CO2 vented by power generators, which can evolve into CO2-captured power generators (CCPGs). So, once a power generation system combusts the fossil fuel and vents the flue gas, the CCS system would capture the CO2 emission from the vented flue gas and store the CO2. The use of CCS will not only reduce the CO2 emission but also enhance the operational flexibility of conventional fossil-fueled generators. Figure 1 shows the commercial CCS system which consists of scrubber, stripper, compressor, and storage. The scrubber would absorb the CO2 in the vented flue gas by using the solvent. The stripper separates the CO2 from the solvent, and further delivers the CO2 to the compressor. The compressor compresses the gaseous CO2 into concentrated stream CO2, while the storage is applied to store the concentrated stream CO2. In a near future, a higher efficient CO2 absorption based on solid sorbent will be available which will make the CCS system more economically feasible.

In CCPGs, CCS and power generation systems work independently. The CCS system, which consumes a small portion of the power produced by the power generation system, can be applied to reduce the peak load and accommodate the variability of renewable energy resources in the power generation system. The CCS system can be charged at off-peak hours to capture CO2 like a battery and release power to reduce the load at peak hours (i.e., peak load shifting). Figure 2 shows the wind power curtailment with and without the CCS system, where the CCS can significantly reduce the wind curtailment. As the number of CCS systems is increased from 0 to 2, the wind power curtailment is decreased from 16.0% to 7.7%. However, the CCS system could be costly, add to the operational complexity of conventional fossil-fueled generators, and reduce the generators’ efficiency as it consumes some of the generated power. Such drawbacks are major obstacles to the utilization of the CCS system and widespread deployment of CCPGs. To counter some of these drawbacks, we propose a transactive market for energy and carbon, which can incentivize additional investments in CCS facilities.

Transactive Energy and Carbon Market for Mitigating the CO2 Emission: 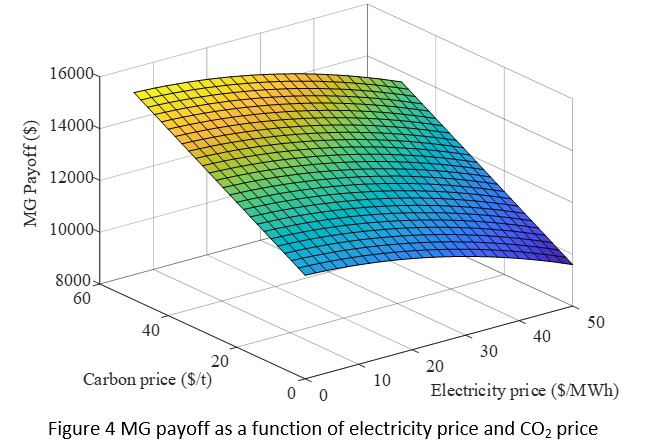 This article edited by Vigna Kumaran

Dr. Mohammad Shahidehpour is the Bodine Chair Professor of Electrical and Computer Engineering and Director of the Robert W. Galvin Center for Electricity Innovation at Illinois Institute of Technology (IIT). His project on Perfect Power Systems has converted the entire IIT Campus to an islandable microgrid. He has co-authored 6 books and 750 technical papers on electric power system operation and planning, and served as the founding Editor-in-Chief of the IEEE Transactions on Smart Grid.  Dr. Shahidehpour is the recipient of the 2009 honorary doctorate from the Polytechnic University of Bucharest. He is a Fellow of IEEE, Fellow of the American Association for the Advancement of Science (AAAS), Fellow of the National Academy of Inventors (NAI), and an elected member of the US National Academy of Engineering (NAE). He is also listed as a highly cited researcher on the Web Science (ranked in the top 1% by citations demonstrating significant influence among his peers).

Mingyu Yan (S’18) received the B.S. degree from the College of Electrical Engineering, Zhejiang University, Hangzhou, China, in 2016 and the master’s degree from the Huazhong University of Science and Technology, Wuhan, China in 2018. He is currently working toward the Ph.D. degree with the Robert W. Galvin Center for Electricity Innovation, Illinois Institute of Technology, Chicago, IL, USA. His research interests include power system operation and planning, power market, multiple energy system integration, smart cities and power system reliability.

Hamid Arastoopour, Ph.D., is Henry R. Linden Professor of Engineering and director of the Wanger Institute for Sustainable Energy Research (WISER) at Illinois Institute of Technology. His current research interest is particle technology and computational fluid dynamics (CFD) motivated by energy and sustainability applications including CO2 capture, wind and concentrated solar energy. He is the recipient of Sustainable Engineering Forum (SEF), Thomas Baron Award in Fluid/Particle Systems, Donald Q. Kern Award in Heat Transfer and Energy Conversion, PTF Lectureship Award in Fluidization, Ernest W. Thiele Award, and PTF Fluidization Process Recognition Awards from American Institute of Chemical Engineering (AIChE). He is also the recipient of the University Excellence in Teaching Award. He holds 16 U.S. patents, published two books, and about 140 articles. He is serving on the journal editorial board of Sustainability and Fluid. He is a Fellow of the National Academy of Inventors (NAI) and AIChE.