Getting to Zero With a Little Help From Smart Grid Functionality

Ontario, Canada recently completed a 90% reduction in emissions from its electrical power system. However, all zero-emission electrical power systems produce significant amounts of surplus clean electricity. The current practice in most jurisdictions is to curtail the excess production of electricity. This article suggests retail price reforms and smart grid functionality that can allow consumers to effectively use that surplus clean electricity to reduce emissions in other sectors. 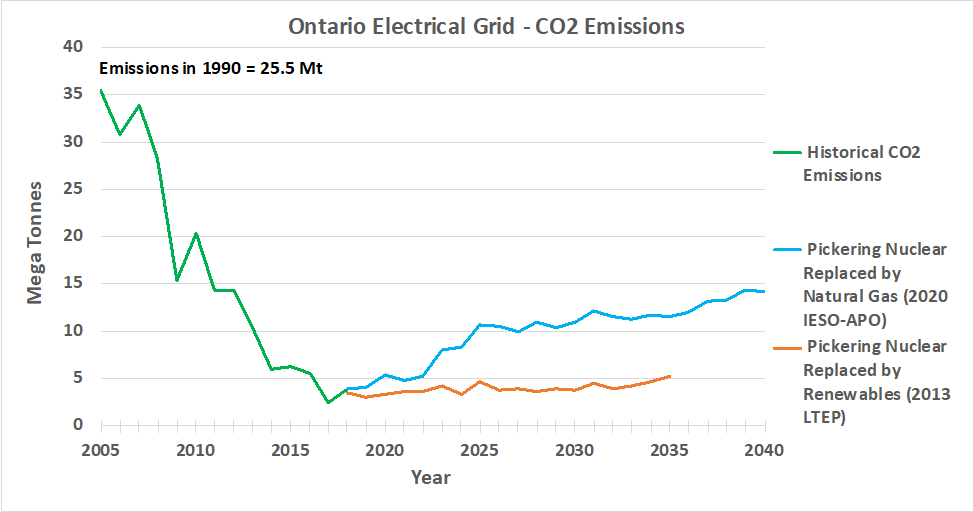 Ontario achieved these results by:

However, as Ontario’s power grid became cleaner, the amount of surplus clean electricity produced during low load demand periods and during high renewable production periods began to grow and caused electricity rates to rise much faster than general inflation rates. The result was a loss of public support for replacing the soon to retire Pickering Nuclear plant with renewable power generation. The current government has decided to focus on reducing the rate of rise of electricity rates.  Hence, unbuilt solar and wind turbine projects got cancelled and the government plans to rely on natural gas to replace the Pickering Nuclear capacity until the new generation of small modular nuclear reactors are commercialized.

The total and curtailed amounts of clean electricity are expected to decline during the nuclear plant refurbishment program from 2017 to 2033 while natural gas is used to replace the Pickering plant.  However, those surpluses will rise again when the refurbished reactors return to service. Table A shows the historical amounts of surplus clean electricity and the amounts that were curtailed because there was no domestic or export demand.

Table A
Amount of Surplus and Curtailed Clean Electricity in Ontario

Therefore, the real barrier in creating a market for surplus clean electricity to displace fossil fuels is the retail pricing policy adopted by most utilities and their regulators around the world.  Most require that any energy extracted from the power system be priced such that a portion of the fixed cost of the installed infrastructure is added to the marginal cost of production.  That is perfectly sensible for electricity demand that cannot be interrupted.  However, if we define a new type of electricity demand which could be interrupted, then there is no demand for more capacity.  If that is the case, then that new type of demand should not be required to pay for the fixed cost of infrastructure when there is no additional demand on the installed capacity.

Based on above, the first step in creating a market for the surplus clean electricity is to reform our electricity rates so that consumers can pay for their electricity according to the burden they place on the power system. As a matter of fact, this is not a new concept and it was described in a technical paper titled “The Tariffs of Tomorrow” by Ahmad Faruqui and Cecile Bourbonnais, in the IEEE-P&E magazine, May/June edition.

Unfortunately, mandatory retail electricity price reform is difficult to get approved because mandatory changes result in both consumers who will gain from the change and others who will lose. However, if we make the new rate plan voluntary then the rate reform opposition should subside provided the change does not increase costs for the power system.  Those people who are prepared to purchase the required equipment and smart grid control functionality will volunteer for the new rate plan and will get access to that surplus power at its wholesale market price with no other markups. The wholesale market price in most deregulated power markets is the marginal cost of production of the next MWh of energy. Therefore, there is no additional cost to the power system for consumers to use that surplus clean electricity on an interruptible basis.

The second step is to develop the required smart grid functionality to allow consumers to use the clean surplus electricity when it is available and not use it when it is not available. During spring and fall shoulder seasons, surplus clean power is always available in most clean power systems between midnight and 6 AM on every day of the week.  In that period, a simple time of use method can be used for the smart grid functionality.

Surplus clean electricity is frequently available during on-peak demand periods in power systems with a high proportion of renewable generation. A more sophisticated smart grid functionality will be required to avoid retail markups during on-peak demand periods. The smart grid functionality must confirm there is spare generation, transmission and distribution capacity to carry that interruptible power to the consumer.

Finally, some means must be included in the smart grid functionality to co-ordinate the many interruptible loads so there is not an excessive and sudden spike or drop-off in load demand. These types of control and co-ordination problems have been solved for other applications in the past. There are several effective methods available depending on the communication and control equipment that will be used.

A study for Ontario’s heating demand was undertaken by MIDAC Corp for the Ontario Society of Professional Engineers (OPSE) and published in a report titled “Retail Electricity Price Reform: Path to Lower Energy Bills and Economy-Wide CO2 Emission Reductions. The report is available on-line from OSPE.  Figure 2 shows how much heating demand can be displaced by Ontario’s surplus clean electricity if we do not allow the consumer to create a higher personal peak load at any time of day. 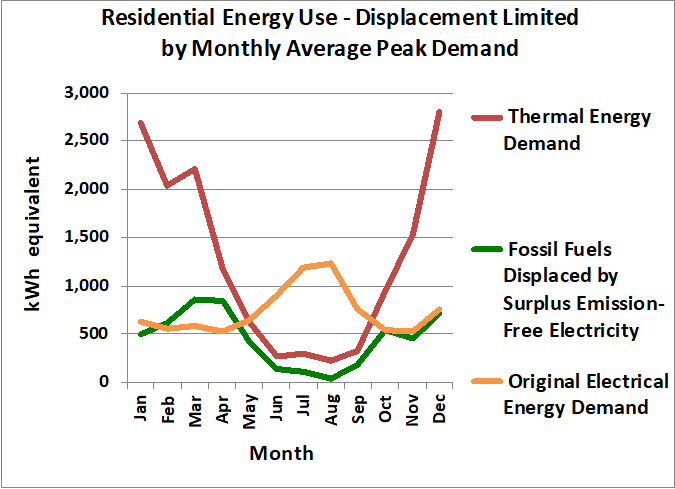 Finally, what could the consumer expect in terms of lower overall annual energy bills if he or she subscribes to the new voluntarily price plan and uses the surplus power only when it is available to heat their homes and hot water? Table B summarizes the annual savings and Table C summarizes the emission reductions that are feasible in Ontario in the next 15 years. The study confirmed that smart grid functionality can be used to displace fossil fuels for hot water and space heating with surplus clean electricity on an interruptible basis. Consumers will save money on their energy bills and reduce emissions to the environment at no additional cost to the power system. The bill savings and emission reductions will depend on which fossil fuel is displaced.

Paul Acchione has B.A.Sc. and M.Eng. degrees from the University of Toronto. Paul is a licensed professional engineer in Ontario, a fellow of the Canadian Academy of Engineering, and a member of several engineering societies in his field of specialization. Paul has over 49 years of engineering and management experience in the electric power industry. Paul worked for 31 years with Ontario Power Generation (OPG) and its predecessor companies. He was responsible for automation systems, computer modeling, and simulation analysis for both fossil-fueled and nuclear plants. For the last 14 years, Paul has been an electric power management consultant at Market Intelligence & Data Analysis Corp. Paul was the 2013-14 President and Chair of the Ontario Society of Professional Engineers (OSPE) and is currently a subject matter expert with OSPE’s Energy Task Force. Paul received the OSPE President’s Award in 2018 for his work on energy policy.