For many years, calculation of the thermally permissible loading on transmission circuits was achieved using:

The combination of these simplified models and often conservative assumptions led to generous safety margins for the rating itself. This provided network operators with lots of flexibility, and helped to ensure that system constraint costs associated with limits on power flows were relatively modest.

The Challenge: Loading patterns are now much more variable, while generation sources are more decentralised and intermittent. Decades of service experience combined with improvements in modelling techniques mean that design practices are less conservative. Circuits may need to loaded more heavily during peak periods, but the actual thermal headrooms may be lower than in the past due to a focus on achieving more cost efficient construction of new circuits.

A solution: Dynamic circuit ratings use temperature measurements in combination with dynamic thermal calculations to determine the allowable loading of a circuit in real time. A wide range of tools have been created and deployed to calculate dynamic ratings for overhead transmission lines, underground cables and transformers. However, conventional dynamic ratings have some limitations, namely that they consider the capability of the system as it stands “now”. This is only useful if the system operator is responding to an unplanned outage that has just happened. The operator often needs to know what transfer capacity will be available over the course of a few hours, or perhaps tomorrow afternoon. This is most important when evaluating contingency scenarios, identifying an appropriate response to unplanned outages. This is especially important if the unplanned outage results in a need to add or remove generators from the system. This brings us to the concept of Predictive Ratings. 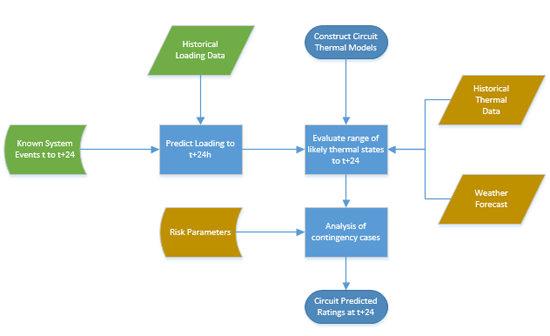 An illustrative example of the predictive rating concept.

Methodology: Figure 1 shows an example of a methodology which could be used for generating predictive ratings. It requires two main inputs: 1) good quality historical load data, and 2) suitable measurements (or reliable model outputs) for the circuit temperature profile. From these inputs, it is necessary to predict changes in loading on a circuit (which affect its temperature in the pre-fault scenario), along with changes in ambient conditions such as air temperature or solar radiation which have an effect on the circuit. This allows an estimation of the circuit conditions between the time t (when the prediction is made) and, for example, t+24h for day-ahead analysis. When the predicted thermal states are known, a contingency analysis tool can be used to determine the short term ratings which might be applicable for the day ahead, on the assumption that the system behaves as predicted for the next 24 hours.

Risk Appetite: This approach removes many of the traditionally conservative assumptions used for circuit thermal ratings as part of normal day-ahead planning processes. As there are a range of different outcomes from the contingency analysis, and some inputs are not certain, the operator needs to establish a risk position. This may include considerations of factors such as the known asset health indices of the circuit in question.

Challenges to be solved for deployment: Technical challenges being addressed within the research community include:

In many cases, the challenges to be overcome are not only technical. Existing business practice is a major barrier; network planners and controllers are accustomed to ratings being broadly fixed, based on existing seasonal data and well understood design assumptions. Integration of predictive ratings into existing processes may not be an easy task. Nevertheless, many generation constraint actions still need to be finalised at the day-ahead stage; a network operator who is better informed is likely to be in a better position to control the costs associated with these activities, despite operating in an uncertain environment.

Dr. James Pilgrim (M’09, SM’17) received the Bachelor’s degree in electrical engineering from the School of Electronics and Computer Science at the University of Southampton in 2007. He joined the staff of the University of Southampton in 2007 as a Research Assistant, gaining his PhD in 2011. He joined the academic staff of the University in 2012. His research interests include all high voltage equipment, particularly high voltage cables and associated insulation systems. He is currently the Chair of the DEIS Technical Committee on Smart Grid. He is actively involved in the development of new standards and best practice through acting as the UK member of IEC TC 20 WG19 (Current Rating and Short Circuit Limits of Cables) and Cigre Working Groups B1.56 “Current rating verification” and B1.64 “Evaluation of losses in armoured three core power cables”.