US-India collaborative for smart distribution System with Storage (UI-ASSIST) is a consortium that brings together 14 organizations from India and 16 organizations from the US to work on the future smart distribution grid. Indian Institute of Technology (IIT) Kanpur and Washington State University (WSU), Pullman, WA, lead this effort from India and USA, respectively. This project aims at addressing the essential issues related to the adoption of smart grid concepts such as Distributed Energy Resources (DERs) and storage integration, communication, cybersecurity, etc., in the distribution network for its efficient and reliable operation while providing optimal socio-economic benefits.

As a part of this project, a smart Low Voltage (LV) distribution system test-bed is developed at IIT Kanpur. The objective is to build a test-bed replicating the Indian distribution network, which can be used as a platform to study various challenges and impacts of DER integration on the actual distribution system. The test-bed is fully reconfigurable to realize lab-scale models of any LV distribution system with or without DER integration. The designed test-bed has the capability to interface with various real-time simulators such as  Real Time Digital Simulator (RTDS), Typhoon and Opal-RT, etc., and perform Power Hardware In Loop (PHIL) simulations to facilitate system performance studies. Many components of this test-bed are developed by graduate students as a part of their research work. In this article, a holistic view of the complete test-bed facility is provided, and different elements of the test-bed are introduced.

The first step to realize the test-bed was to identify various building blocks of the actual distribution system and fabricating their lab-scale models to fit in the test-bed environment. In the designed test-bed, the voltage level is kept similar to the actual system. However, the power rating is scaled down while maintaining the per unit equivalency. A block-level representation of the test-bed is shown in Fig. 1. The descriptions of various components of the test-bed are summarized below.

In a typical distribution system, power is supplied through a step-down distribution transformer. A similar arrangement is made in the test-bed. It is supplied from the local grid through a 3-phase delta-star isolation transformer. As a result, the source impedance characteristics of the test-bed are similar to the actual system. In order to make the test-bed versatile, the neutral of the secondary of the transformer is not solidly grounded. Hence, there are five terminals available for the test-bed. Three phases and neutral are available from the transformer. A separate ground terminal is also made available for earthing. This enables the test-bed to replicate distribution systems with weakly grounded or non-grounded distribution transformers, which is not uncommon in rural India. The test-bed can alternately be supplied from a commercial grid simulator. This grid simulator is a controlled voltage source that can generate various harmonics and transient voltage profiles. This enables the operation of the test-bed to emulate various power system test conditions such as fault, voltage sag/swell, and frequency variation, etc.

Typically, in distribution systems, power is delivered either through overhead lines and/or underground cables.  To imitate these power conductors, line modules are designed from their equivalent models. These modules are of two types. One can replicate line lengths of 60/120/180 m. while the other can replicate a line length of 15/30/45 m. By combining these two types of modules, power lines of different types and lengths can be emulated. Using physical L/C models to represent a transmission line is not new. In fact, they are used in many universities to carry out power system teaching experiments such as voltage regulation, Ferranti effect, and relay coordination, etc. The primary difference between a transmission line and distribution line is the resistance of the wire, which is relatively larger and line inductance, which is much smaller due to shorter distance. The effect of line charging capacitances is also negligible in distribution lines.  As shown in Fig. 1, the line modules used in the test-bed are designed using power resistors and ferrite core inductors. Iron core is avoided as it is not suitable to realize such smaller inductances. 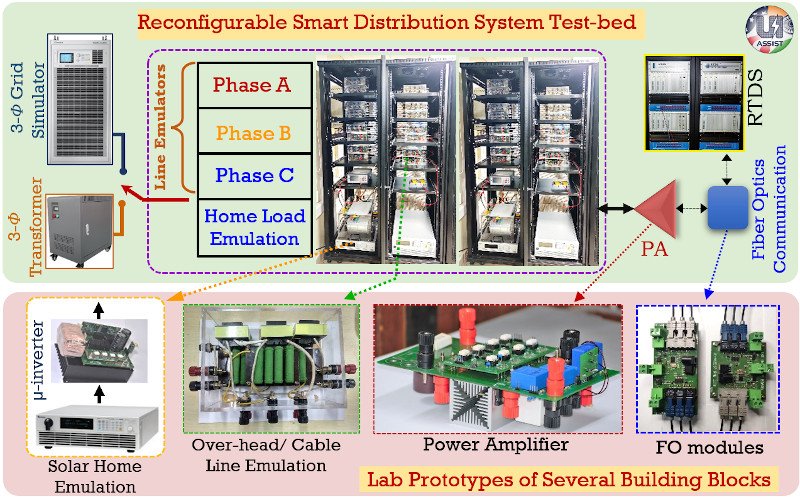 The loads in a distribution system are domestic homes, small businesses, and electric vehicles, etc. In order to emulate conventional loads, R/L load banks, and AC electronic loads are used. Houses with roof-top PVs act as loads as well as sources. Commercial solar simulator and lab-designed micro-inverters are combined to represent solar-powered homes. Lithium-ion battery banks with self-discharge arrangements are used to emulate EVs and community storage. These solar and battery emulators with inverters can be connected at different points of the system to reconfigure the test-bed to represent various practical scenarios.

The test-bed has the provision to be connected to the RTDS to carry out PHIL simulation and perform system-level studies. They are interconnected by lab designed Power Amplifier (PA) of 2 kW rating and Fiber Optics (FO) communication blocks. Both these prototypes are shown in Fig.1. One communication module is placed on the RTDS, and the other is placed close to the power amplifier. The communication delay between the RTDS and the PA achieved by the fiber optics-based communication blocks is 2.3 µs. The designed power amplifier uses heating loads to sink power. Any other real-time simulator, such as Opal-RT and Typhoon, etc., can also be connected to the test-bed in a similar fashion.

Data-center racks are improvised to house the line modules, load modules, different loads, and measuring equipment. The height of different shelves in this rack is adjustable to accommodate the modules as per the testing framework. All the supply and loads are protected by standard domestic circuit breakers and utility protection devices.

The successful implementation of the smart grid initiative requires participation and compatibility among various disciplines and technologies. The reconfigurable distribution system test-bed developed at IIT Kanpur is facilitating critical testing of different state of art solutions in a controlled environment, required for adaption of the new technologies in the realization of smart-distribution grid, and thereby leading to improved energy reliability. More information on this project can be found at the UI-ASSIST Website.

For a downloadable copy of July 2020 eNewsletter which includes this article, please visit the IEEE Smart Grid Resource Center.

Santanu K. Mishra (S’00-M’04-SM’12) received a B.Tech. degree in Electrical Engineering from the College of Engineering and Technology, Bhubaneswar, India, in 1998, an M.Tech. degree in Energy Systems Engineering from Indian Institute of Technology, Chennai, India, in 2000, and the Ph.D. degree from the Department of Electrical and Computer Engineering, University of Florida, Gainesville, FL, USA, in 2006.
He worked as a senior application engineer with the International Rectifier Corporation in Rhode Island, USA, from 2004 to 2008. Currently, he is the MoSDE Chair Professor at the Indian Institute of Technology, Kanpur, India. During Fall of 2017, he was a Visiting Professor with Center for Power Electronics Systems (CPES), Virginia Tech., Blacksburg, VA, USA. His research interests include power converter design, implementation, control, and applications in rural scenario. He serves as an associate editor of several journals including IEEE Transactions on Industry Applications, IEEE Transactions on Power Electronics, IEEE Consumer Electronics Magazine, and IET Power Electronics.

Ramanuja Panigrahi (S’16) received a B.Tech. degree from Biju Pattnaik University of Technology, Odisha, India, in 2013 and an M.Tech. degree in Electrical Engineering from the Indian Institute of Technology Kanpur, Kanpur, India, in 2016, where he is currently working towards the Ph.D. degree.
His research interests include design and control of power converters, energy harvesting, power electronics for advanced grid functionality, and integration of PVs in secondary distribution network.

Suresh Chandra Srivastava (SM’91) received the Ph.D. degree in Electrical Engineering from the Indian Institute of Technology (IIT) Delhi, New Delhi, India.
He is currently serving as Professor in the Department of Electrical Engineering, IIT Kanpur, India. His research interests include power system stability & security analysis, synchrophasor applications, power system restructuring, ac/dc microgrid and smart grid. He is a Fellow of the Indian National Academy of Engineering (INAE), Institution of Engineers (India), Institution of Electronics and Telecommunication Engineers (IETE), and Indian Academy of Mathematical Modeling and Simulation, and Senior member of the IEEE.