Robust Synchronization for High Penetration of Inverter Based Resources

To achieve the goal of carbon free energy infrastructure as soon as possible, an extensive development and installation of renewable energy such as wind and solar is imperative. The way that renewable energy is converted into electrical energy is different than traditional thermal power generation. It is not based on synchronous generators, but has transitioned to a system dominated with power electronic converters. Thus, these renewable energy resources are generally called inverter-based resources (IBRs). The large-scale development of wind and solar power will inevitably lead to significant changes in the power system, that is, a transition from a synchronous generator-based power system to a power electronic converter-based system as shown in Fig. 1. This transition will also bring a series of emerging problems, such as the decrease in grid strength and low inertia of the grid, which will make it difficult to maintain the voltage and frequency stability. One of the important questions of such a modern power system is how to achieve a robust synchronization of multiple distributed IBRs. Different from the conventional synchronous generator, which is based on the inherent 'swing equation' guaranteeing the synchronization with the grid, IBRs’ synchronization is based on the implemented control strategies for maintaining the synchronization. The general control structure of IBRs is shown in Fig. 2. The effect of different control levels on the synchronization performance will be discussed. 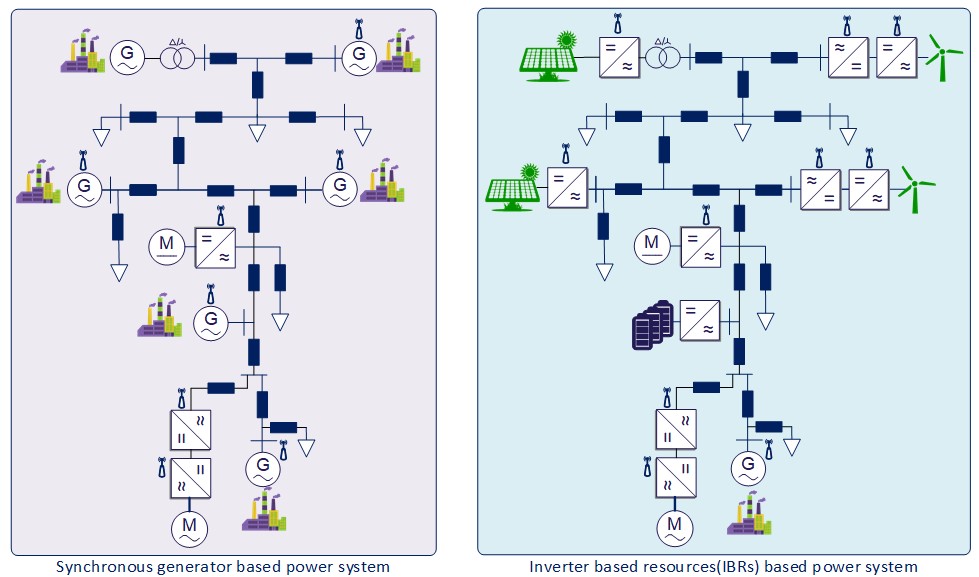 In secondary control, the power reference of each IBR is generated at this level, which has a significant effect on the synchronization stability. The information and communication technologies play a vital role in enhancing the synchronization performance of the IBRs based power system. Furthermore, such a large-scale integration and monitoring of IBRs needs significant efforts in terms of sensing and acquisition, where supervisory control and data acquisition (SCADA) systems are usually employed. However, these functionalities also increase the vulnerability to cyber risks and adversarial intrusions. The cyber attacks might change the power reference, which will affect the synchronization performance of each IBR. Considerable methods to avoid this practice can be achieved in a stepwise manner. First, cyber attacks should clearly be differentiated from any system faults. Once this step is accomplished, a diagnosis of the presence of cyber attack in the affected components needs to be carried out. Finally, once the compromised component is detected, the attack source is removed from the system. A good measure of IBR resiliency can be given by how quickly the IBR is restored to its normal operation following a cyber attack. As a result, further investigation needs to be carried out on identifying the risky sectors in the cyber layer equipped with control of IBRs. 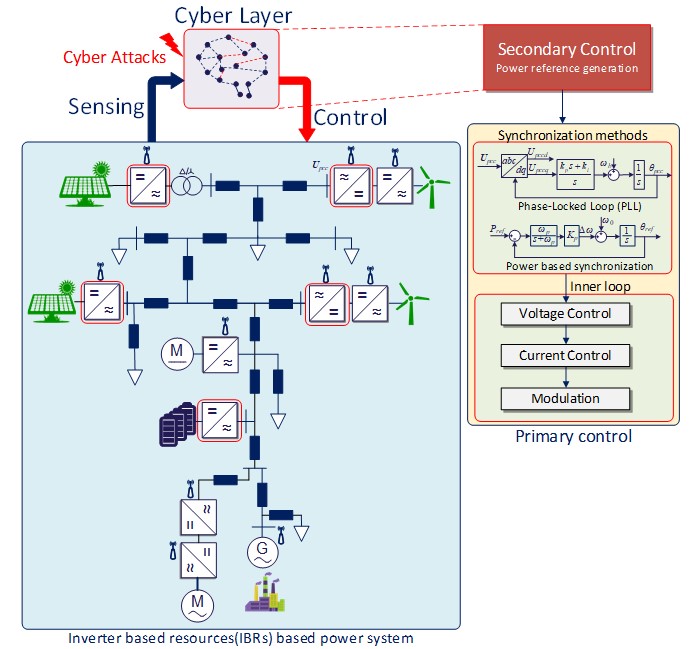 In the primary control of IBRs, there are two different synchronization methods: grid-following control and grid forming control. In the grid following control, the phase-locked loop (PLL) is applied for obtaining the phase and frequency of the voltage at the point of common coupling (PCC). These synchronization method works well under strong grid condition. However, due to the high ratio of IBRs integrated to the grid, the short circuit ratio (SCR) becomes smaller, which causes the PCC voltage fluctuataions against the output power of IBRs. Under this situation, it has been proved that there is a negative resistance introduced by the PLL, which causes instability and limits the power transfer of IBRs in low SCR grids. To overcome aforementioned problems, grid forming control methods are proposed. A wide variety of grid forming control schemes has been developed for IBRs, such as power synchronization control, droop control, virtual synchronous generator, synchronverter, and so on. Generally speaking, all these methods are based on power synchronization, which means that the control angle of the IBRs coming from the power control loop. This is a big difference from the PLL based method, which is based on voltage synchronization. This obvious synchronization difference ensures that the grid forming control can perform well under low SCR grid and even in standalone mode.

Chao Wu (M’19) was born in Hubei Province, China. He received the B.Eng. degree from HeFei University of Technology, Hefei, China and the Ph.D. degree from Zhejiang University, Hangzhou, China, in 2014 and 2019, both in electrical engineering. He is currently a Postdoctoral Researcher in the Department of Energy Technology, Aalborg University, Aalborg, Denmark.  His current research interests include cooperative control of multi-converter systems, particularly the control and operation of doubly fed induction generators for DC connection and the transient stability of power converters.

Subham Sahoo (S’16-M’18) received the B.Tech. & Ph.D. degree in Electrical and Electronics Engineering from VSS University of Technology, Burla, India and Electrical Engineering at Indian Institute of Technology, Delhi, New Delhi, India in 2014 & 2018, respectively. He has worked as a Visiting Student with the Department of Electrical and Electronics Engineering in Cardiff University, UK in 2017. Prior to completion of his PhD, he worked as a postdoctoral researcher in the Department of Electrical and Computer Engineering in National University of Singapore during 2018-19 and in Aalborg University (AAU), Denmark during 2019-2020. He is currently an Assistant Professor in the Department of Energy Technology, AAU, Denmark. He is a recipient of the Indian National Academy of Engineering (INAE) Innovative Students Project Award for his PhD thesis across all the institutes in India for the year 2019. He was also a distinguished reviewer for IEEE Transactions on Smart Grid in the year 2020. He currently serves as a secretary of IEEE Young Professionals Affinity Group, Denmark and Joint IAS/IES/PELS in Denmark section. He is an active member of IEEE PELS technical committee (TC10) on automated design methodologies and cybersecure solutions for power electronics.  His research interests are control, optimization, and stability of power electronic dominated grids, renewable energy integration, physics-informed AI tools for cyber-physical power electronic systems.

Frede Blaabjerg (S’86–M’88–SM’97–F’03) was with ABB-Scandia, Randers, Denmark, from 1987 to 1988. From 1988 to 1992, he got a Ph.D. degree in Electrical Engineering at Aalborg University in 1995. He became an Assistant Professor in 1992, an Associate Professor in 1996, and a Full Professor of power electronics and drives in 1998. From 2017 he became a Villum Investigator. He is honoris causa at University Politehnica Timisoara (UPT), Romania, and Tallinn Technical University (TTU) in Estonia. His current research interests include power electronics and its applications, such as in wind turbines, PV systems, reliability, harmonics, and adjustable speed drives. He has published more than 600 journal papers in the fields of power electronics and its applications. He is the co-author of four monographs and editor of ten books in power electronics and its applications. He has received 32 IEEE Prize Paper Awards, the IEEE PELS Distinguished Service Award in 2009, the EPE-PEMC Council Award in 2010, the IEEE William E. Newell Power Electronics Award 2014, the Villum Kann Rasmussen Research Award 2014, the Global Energy uPrize in 2019 and the 2020 IEEE Edison Medal. He was the Editor-in-Chief of the IEEE TRANSACTIONS ON POWER ELECTRONICS from 2006 to 2012. He has been a Distinguished Lecturer for the IEEE Power Electronics Society from 2005 to 2007 and for the IEEE Industry Applications Society from 2010 to 2011 as well as 2017 to 2018. In 2019-2020 he served a President of the IEEE Power Electronics Society. He is Vice-President of the Danish Academy of Technical Sciences too. He is nominated in 2014-2019 by Thomson Reuters to be between the most 250 cited researchers in Engineering in the world.