A Secure Energy Transaction Platform for Prosumers in a Smart Community

The power system has undergone a transformation from conventional to a smart "avatar" over the last few years and is still evolving. This metamorphosis towards a smarter system is being driven by an underlying transition to a low-carbon and sustainable energy framework for which a structured, efficient and a secure mechanism to enable a smooth integration of various components including Renewable Energy (RE) sources is an important consideration.

In the context of smart grids, smart community is an obvious entity which is expected to be agile, intelligent, and foolproof to address the modern challenges. Information Technology (IT), Operational Technology (OT), automation, and now artificial intelligence involving machine learning, are the core elements of a smart community. Accordingly, the key components like smart meters, Distributed Energy Resources (DERs) including rooftop solar PV, Electric Vehicles (EVs) & energy storage, flexible loads, and the corresponding Internet of Things (IoT) devices need to be integrated and managed efficiently over a trustworthy platform at a community level. Moreover, the enhanced participation of consumers in the smart grid paradigm leads to more information flow and the emergence of prosumers causes bi-directional energy flows which further necessitate a secure, robust, and cost-efficient mechanism for managing such transactions. Prosumers are utility-grid consumers that generate clean power through their rooftop solar systems and store excess in behind-the-meter batteries or EVs and export it to the grid. Utility-led schemes like net-metering and net-billing have emerged to incentive the export from the prosumers’ side. However, in some regions, the existing business model fails to attract a section of consumers. The relatively higher upfront cost of RE systems, data privacy-related issues due to bi-directional communication, unattractive retail electricity tariffs, and network complexity due to RE integration are some of the main issues being faced in smart communities. However, the decentralized nature of operations in a smart community do allow the consumers to procure cheaper electricity from the retail market through aggregators or by switching the Distribution System Operator (DSO). Furthermore, prosumers can also trade their excess clean generation with other consumers or prosumers in the community to satisfy the localized demand and supply equation. Such Peer to Peer (P2P) transactions of energy between a set of prosumers and consumers can be managed through a centralized system or by a decentralized mechanism. With an increase in the number of such transactions on a daily basis, a system that is robust, scalable, secure and cost-efficient would be needed. This article talks about P2P energy trading which follows a decentralized approach.

A centralized energy transaction platform would require high energy storage capacity and its response time would lower with an increase in the number of transactions by prosumers. Such challenges can be addressed through a decentralized P2P energy transaction management platform. A decentralized energy network provides for excellent features such as complete observability of the bidirectional energy and information flow between consumers and prosumers and the utility at the local community level. A P2P energy transaction platform can allow a set of prosumers to trade their excess on-site generation at local level or to nearby peers without any third-party involvement so as to satisfy the local demand and supply at prices acceptable to both the sellers and buyers. Given the decentralized nature of these transactions, a decentralized control would make sense, and hence P2P energy trading is a decentralized process. This type of a transaction platform, in general, will have some challenges, higher operational difficulties as well as regulatory issues and operating costs which will have an impact on prosumer and consumer behaviours. In addition, breach of data privacy and security, and malicious decisions due to cyber-attacks can lead to third-party monopolies rendering an ineffective operation of such local energy markets with inequitable distribution of rewards, incentives and penalties. As the number of participants and transactions increases, more issues will arise.

The Energy Internet (EI) can be a potent solution for meeting the future energy challenges since it can take care of the real-time status of all the players in the system with the help of IoT devices, intelligent communication and IT to support consumer participation [1]. The main goal of the EI is being seen as the capability to overcome the present smart energy system limitations and to a build a fully automated intelligent power system. The basic idea behind this is that energy generation and consumption related information and utility-grid component status and market information is shared with each participant in a transparent yet secure and trust-worthy manner. Local generating units, real-time demand, microgrid and DER operational information, energy storage units, local community generation, consumers, and local energy markets are identified as the main players and key data points that would govern the optimal operation of a smart community. Hence it is pertinent to maintain a ledger wherein the key information relating to each energy-related transaction involving these players gets stored and is accessible to all the peers or consumers/prosumers with the ability to traceback each record in time. If such recorded transactions are encrypted (accessible through a set of authentication keys) and are entered into the ledger only after cross-validation or a "consensus" among the peers, a chain of immutable copies of records would form. Such a distributed ledger or “Blockchain” allows ownership to all the peers yet not a single entity has the sole control. The key features of blockchain technology provide for an excellent tool to create a more reliable EI-based decentralized energy market.

Blockchain is a digital platform having encryption and decryption keys to embed time-stamped information of any transaction in a record or block. The consensus algorithms, smart contracts, and the underlying cryptography are the main key aspects of this technology. A blockchain-based P2P energy trading platform will have a digital wallet for individual prosumers which is the record-keeper of all information. It ensures that one information set is recorded only once during a transaction. All the participants freely take fast decisions without any time delay using a consensus algorithm to validate each record against each energy transaction. This process is automatically performed under some agreements through a smart contract which is a predefined script that includes all terms and conditions. There are two keys: an encryption key and a decryption key. When the prosumer sends some information to other prosumers and the utility operator in a smart community, then the information is encrypted into plain text with a secret key. On the other hand, the encrypted message can be decrypted into its original form with a secret key. When the predefined script matches from both side keys then the information gets converted into original form after which the peers agree to take the next decision. The cryptography features provide the security and protection to data at the time of communication between prosumers. In this way, blockchain technology provides security at the time of energy transactions between prosumers in a smart community and also builds trust among peers through a consensus mechanism. The absence of middlemen or any mediating entity reduces the transaction cost significantly hence the platform becomes cost-efficient.

A few pilots have already started in India for encouraging a digitally enabled local marketplace in the country within a distribution utility license area [2]. Some of the worldwide existing and practical & trials blockchain-based energy trading platforms has been explored in [3,4]. Figure 1 below illustrates the basic overview of the use of blockchain technology in a local energy market. 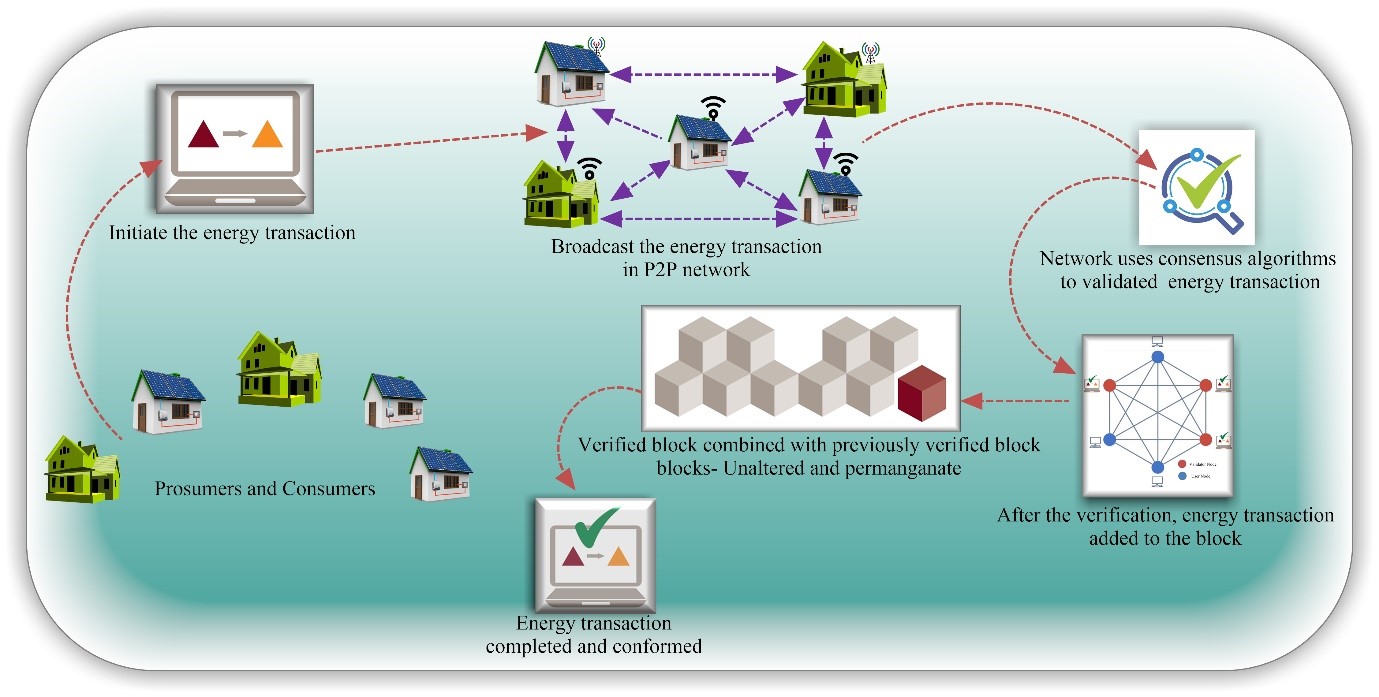 This article was edited by Jose Medina.

To view all articles in this issue, please go to June 2022 eBulletin. For a downloadable copy, please visit the IEEE Smart Grid Resource Center.

Shashank Vyas has worked as Manager-Innovation in the Energy Storage vertical of SB Energy Private Limited, a Softbank group company involved in executing new ideas on energy storage and EVs. Prior to this, he was with the Electricity and Fuels Division of TERI as an Associate Fellow for 3.5 years where he handled research projects in the domain of distribution systems and the BESS control validation and pilot implementation components under the Indo-US project on distribution level battery energy storage. He was also involved in projects related to implementation of blockchain based solutions for P2P trading of rooftop solar power in distribution networks. He has a cumulative 6+ years of research experience in distribution system analysis and machine learning applications to smart grids. Prior to joining TERI in August 2017, he worked in the position of National Renewable Energy Fellow under MNRE fellowship at National Institute of Technology Jaipur. He worked for short stints as research assistant in solar photovoltaics division at Central Electronics Limited and at Microgrids division of Solar Business Unit at Larsen and Toubro Limited, Chennai. He holds a PhD in predictive analytics and machine learning for islanding management in distribution feeders with high solar PV penetration from National Institute of Technology Jaipur.

Rajesh Kumar (M’08–SM’10) received the B.Tech. (Hons.) degree in Electrical Engineering from the National Institute of Technology (NIT), Kurukshetra, India, in 1994, the M.E. (Hons.) degree in power systems from the Malaviya National Institute of Technology (MNIT) Jaipur, Rajasthan, India, in 1997, and the Ph.D. degree in power systems from the University of Rajasthan, Rajasthan, India, in 2005. Since 1995, he has been a Faculty Member with the Department of Electrical Engineering, MNIT Jaipur, where he is currently associated as a Professor. He was a Postdoctoral Research Fellow with the Department of Electrical and Computer Engineering, National University of Singapore (NUS), Singapore, from 2009 to 2011. His research interests include theory and practice of intelligent systems, computational intelligence, and applications to power system, electrical machines, and drives.