Abstract: The use of information and communication technologies and computer-based software to enhance the quality, efficiency, and reliability of smart grids (SGs) have brought unwanted threats in these systems; one of the most important of such threats is cyber-attack. Understanding the ways to detect and deal with cyber threats in SGs will increase the resilience of power systems. In this paper, conceptual models of SG vulnerabilities are presented to address the issue of the vulnerability of SG control systems against cyber-attacks. Different scenarios of cyber-attacks are then dealt with in SG control systems to enhance their resilience.

The main security issues of SG control systems against cyber-attacks are given in Figure 1. These issues are divided into four categories: 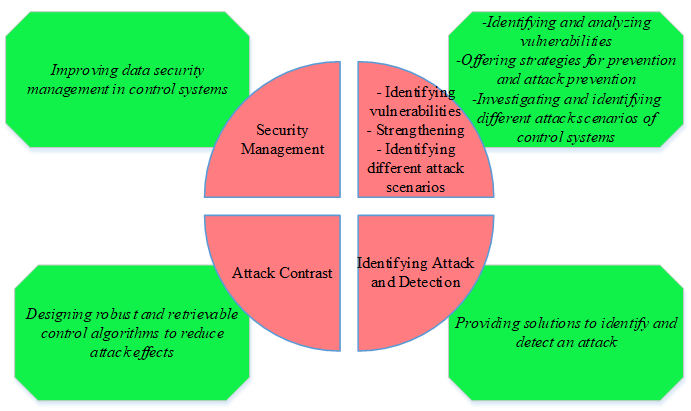 Controlling of SG in energy systems has the task of directing and controlling physical processes. They usually consist of a set of multiple components including sensors, operators, data processing units such as programmable logic controllers (PLCs), communication networks, and central computers. There are several general models for elucidating the structure of smart control systems [1, 2]. A conceptual model of SG control system vulnerabilities is presented in Figure 2. As can be seen from the Figure 2, the vulnerabilities of the SG control system are divided into six categories: 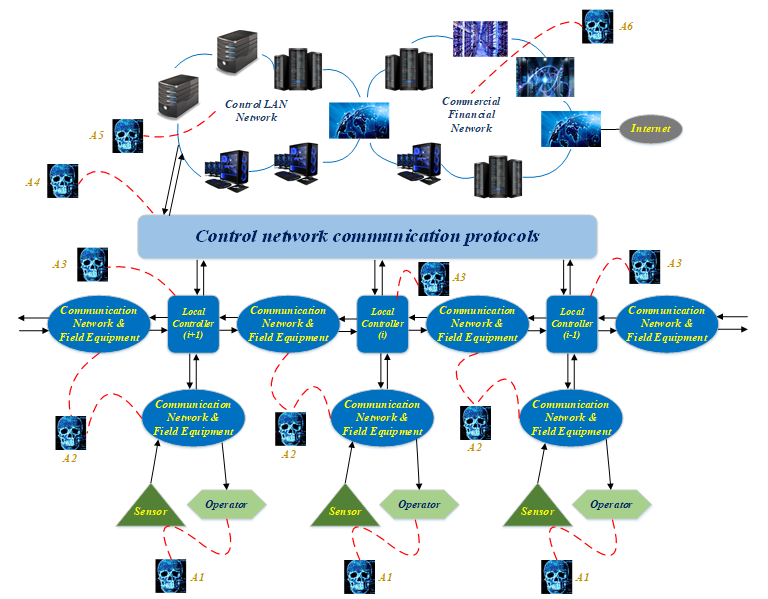 The layered structure of this conceptual model emphasizes that the types of vulnerabilities of each layer of SG control system are different, and therefore each layer requires different security measures.

With the advancement of control and protection systems in SGs as well as their use of the same software, hardware and network platforms and having the same standards, it is possible for unauthorized persons to access the internal layers of these systems. In general, an attacker who intends to attack a cyber-attack and damage an intelligent control system faces two major challenges:

Nowadays, many protocols are used in intelligent control systems. Most of these protocols are designed to increase efficiency, reliability in real-time operations, and support for economic and operational requirements. Unfortunately, most of these protocols have ignored any unnecessary security features such as authentication and cryptography to enhance performance. Many have been developed by others to use the Ethernet protocol and connect to the Internet.

One of the most useful and also dangerous features of Modbus is its ability to program controllers that many SG protocols share with Modbus. Due to this dangerous feature, attacker can use it to inject malware into PLCs and RTUs. One of the methods of intrusion detection in Modbus protocols is the use of model-based intrusion detection systems. Reference  [6] introduces three model-based methods for monitoring and detecting Modbus TCP protocol attack. These methods provide a protection mechanism with respect to the topology and communication structure of the SCADA network. In order to prevent unauthorized access to the protected system, firewalls have been suggested as a security solution in many sources. One of its tasks is to block messages that are not structured in accordance with the protected area communication protocol [7].

Another common way to increase the security of communication protocols is to use cryptography. There are various traditional methods of encryption, but most are not usable in smart grid control systems. The reason is the limited computing power and low data transmission speed of these components, which must also meet the real-time performance requirements. These limitations make it difficult to implement sophisticated encryption. Reference [8] has explored various encryption methods to ensure data confidentiality and integrity.

Many cyberattacks on industrial control systems have been exploited to exploit vulnerabilities in control equipment, one of which is the Stuxnet attack. Therefore, identification of these vulnerabilities is one of the issues of interest to researchers in this field [9]. In recent years, in addition to software vulnerabilities, various types of hardware have also been heavily favored by security experts. These are widespread in processors and electronic components and are found even on telecommunication surfaces [10].

In an effort to counteract this attack, the source proposes two security measures for the power grid state estimator, which is actually a measure of the minimum amount of attacker effort required to successfully execute an attack. These scales depend on the physical topology of the power grid and the degree of availability of the sensor outputs. Reference [14] stated that complete encryption and out-of-the-box protection of all equipment is not cost-effective and enforceable, and that the success of the injection attack can be prevented by protecting a limited number of measurements and their output.The number of these measurements is equal to the number of system state variables. In reference [15], two algorithms offer protection for a limited number of devices in such a way as to provide maximum security against injection attacks. Reference [16] first described an optimal attack strategy that can cause maximum damage to the system, and then by formulating the defense problem, it has been able to develop an optimal defense strategy and minimize the amount of damage. The economic effects of the data injection attack on the electricity grid market performance were formulated in paper [17].

The purpose of the power grid state estimator is to estimate the state variables of that system based on the measured data. In reference [18], the control center of the state system matrix of the variables was described. Inappropriate estimates can be due to various reasons, such as measurement failures or malicious attacks. In this scenario, it is assumed that the attacker knows the state matrix variables of the target power system and makes subversive measurements with knowledge of this matrix. It then injects these erroneous measurements into the control system to disrupt the state estimation process. Figure 3 provides a schematic overview of the data injection attack on power grid control system. 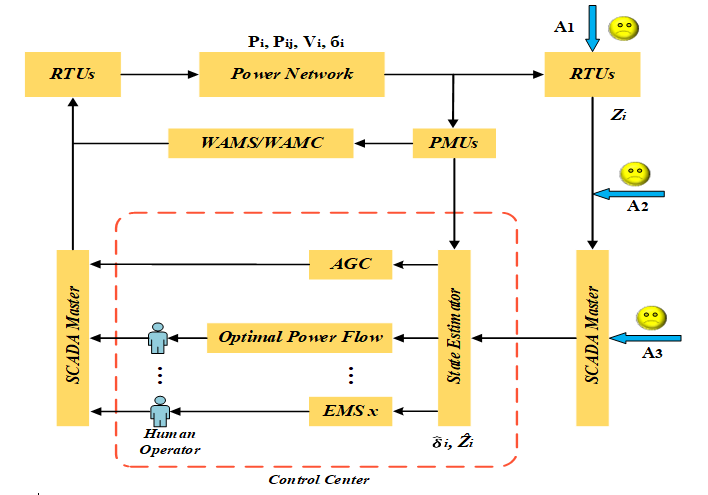 The attack attempts to inject the wrong data dynamically and create an unstable and invisible fashion in the system. Reference [19] assumed that the attacker's purpose is to inject the wrong data, destabilize the system, and remain secret. The author used the Kalman filter and the linear–quadratic–Gaussian (LQG) controller to monitor and control the discontinuous linear system over time, as well as to detect the attack of a false dynamic data injection. Finally, this article described the requirements for a successful attack and proposes a method to counter attack based on the use of plug-in sensors.

One of the most dangerous attacks is the information recovery attack. As observed in the "data injection" attacks, if the attacker can access the sensor or operator output data, he can enter the wrong data in an intelligent and purposeful manner, or accidentally, and control Error making the receiver [20]. In an information recovery attack, the attacker records the sensor or operator information under normal system conditions and sends it to the control network at the time of the attack and sabotage [21]. As such, the control system is cleverly deceived and, in addition to the loop control, the system goes into danger. One way to counter this attack is to add a Gaussian random input with a mean of zero to the system input [22]. Random input is an authentication signal and it is attempted to be optimally designed to minimize impact on system performance.

The attack is actually a closed-loop information reconstruction attack. In other words, the attack output is reconstructed as a closed loop to eliminate the effect on the sensor output and keep the attack hidden. In these kinds of attacks, attacker should have a thorough understanding of the physical model of the system under control in order to simulate a model similar to it. As shown in Figure 4, the attacker puts the simulated model and its controller between the system and the master controller; and by sending arbitrary signals to the main controller input, it hides the attack and replaces the arbitrary work point. 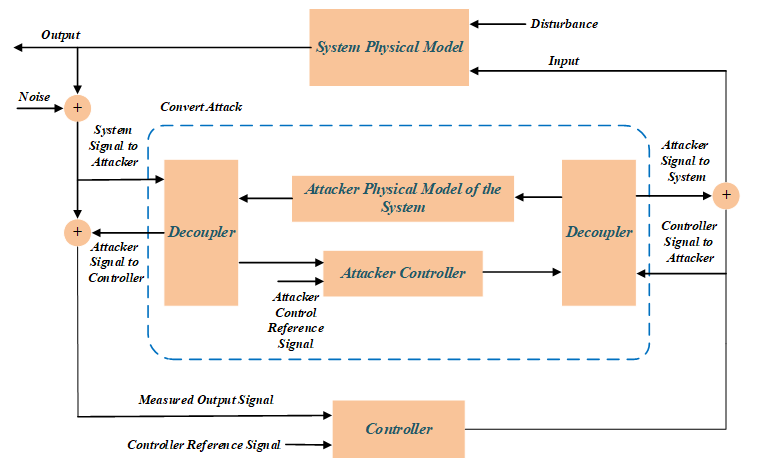 In order to achieve optimal security, in addition to using appropriate security strategies there must be good security management. Appropriate security management tools include security policies, strategies, and programs that are based on accurate threat and risk analysis. In other words, given the wide range of cyber threats that industrial control systems are exposed to, it is essential to identify and analyze these threats to provide an optimal and cost-effective safeguard strategy. In general, the field of study of the articles in this section can be categorized as follows:

Much effort has been made to provide methods for identifying threats and risks as well as analyzing them in industrial control systems. In reference [23], it is attempted to estimate the security threats of cyber-physical systems using the game theory method.

In addition to exploiting unknown vulnerabilities, cyber attackers are developing more sophisticated methods to attack smart grid control systems. Thus, after going through IT-based security strategies, they are virtually confronted with a control system without security protections. On the other hand, the ultimate goal of attackers is to damage and disrupt the optimal functioning of the physical system under control, which is ignored in IT-based security strategies. It can only be stated that IT-based security strategies alone cannot provide a depth defense strategy (the in-depth defense strategy allows the attacker to pass through each layer again to a security layer that eliminates Designed to reduce the attack (or reduce its impact) to control systems. Therefore, this article identified various vulnerabilities and scenarios of cyber-attack in smart grid control systems so as to increase system resilience of power system and to reduce the effects of such attacks.

[5] B. Wang, M. Dabbaghjamanesh, A. K. Fard, and S. Mehraeen, "Cybersecurity Enhancement of Power Trading Within the Networked Microgrids Based on Blockchain and Directed Acylic Graph Approach," IEEE Transactions on Industry Applications, 2019.

Mohammad Ghiasi is currently a Research Assistant at the Shiraz University of Technology. He received his B.S. degree from IAU-South Tehran Branch in 2012 and M.S. degree from IAU-Science and Research Branch in 2016, both in electrical power engineering. Since 2007 he has been with the Power Control Center (PCC) of Tehran Metro as a senior control power engineer. He is a member of Tehran Construction Engineering Organization (TCEO), and also a member of IEEE. His research on modeling, simulation and optimization of power systems, integration and control of hybrid and distributed renewable energy resources, smart grids, resiliency and cyber security in power systems has led to multiple publications in these fields.

Moslem Dehghani was born in Shiraz, Iran, in 1990. He received B.S. and M.S. degrees in Electrical Engineering from Islamic Azad University-kareroun branch respectively in 2012 and 2014, and he has started studying in Ph.D degree in Electrical Engineering in 2019 at Shiraz University of Technology, Shiraz, Iran. His current research interests include power electronic, control, and cyber security analysis of smart grids, microgrid, smart city as well as protection of power systems, fuzzy logic and signal processing.