Maximum Demand (MD) charges were established to encourage the commercial and industrial users to alter their electricity use pattern to decrease the peak demand and lower the requirement for costly peaking plants. Many energy users are opting for solar photovoltaic (PV) system to be installed on their building’s rooftop for self-consumption purposes, thus reducing the electricity bill. However, atmospheric conditions such as temperature, and irradiance influence the solar PV power. Hence, it is likely that the peak solar PV output does not coincide with the instant of maximum demand. This is where batteries can play a crucial role. So, what should be the threshold above which the maximum demand will be shaved to ensure the highest Return-of-Investment (ROI)?

The optimal threshold for the maximum demand will allow commercial and industrial users to prudently invest on techno-economically sized solar PV and battery energy storage system (BESS). The determination of the optimal threshold and techno-economically sized solar PV-BESS can be complicated due to the varying load pattern and the intermittent behaviour of solar PV power output. Moreover, batteries are relatively expensive.

In this article, the Maximum Demand Reduction (MDRed) model is shown as an effective tool for the optimization of the MD threshold and solar PV-BESS sizing. The MD and net consumption reduction due to solar PV-BESS is shown in Figure 1. The optimized MDRed model is based on the mathematical formulation of the MD charges, energy consumed and the cost of solar PV modules, inverter, and batteries. Subsequently, the financial model focuses on the overall cost of solar PV-BESS in comparison to the energy/demand savings for fastest Return-On-Investment (ROI). 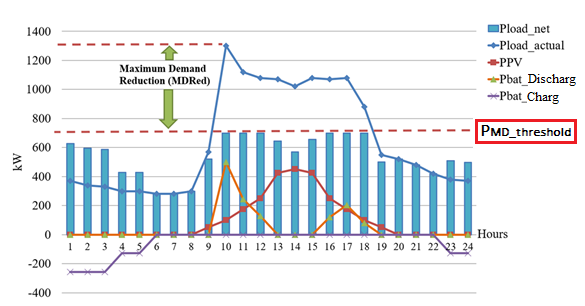 The amount of power that can be shaved depends on the battery capacity, the discharge rate, and other specifications. However, MD shaving may fail if the energy stored in batteries is inadequate for the desired period during peak demand. Thus, the size of the inverter must be considered together with the batteries capacity in obtaining the optimal system cost. The Depth of Discharge (DOD) substantially affects the battery service life. To accurately estimate the investment’s payback period, the DOD must also be considered in the cost estimation. Battery charging and discharging operation are based on the dynamic electricity pricing strategies for MD reduction and monetary expense reduction.

For comparison purpose, the optimized results and ROI for solar PV-BESS was compared with different scenarios where only solar PV or BESS were used. Results indicated that the solar PV-BESS resulted in higher ROI compared to the other two scenarios. In summary, the determination of the optimized threshold and techno-economic sizing for solar PV-BESS can help commercial and industrial loads to reduce their monthly electricity bill.

Ir. Subramani Gopinath completed his bachelor’s degree in electrical power Engineering and Master in electrical engineering at University Tenaga National (UNITEN), Malaysia in year 2006 and 2011, respectively. He is currently pursuing his PhD in Electrical Engineering at University Tenaga National (UNITEN), Malaysia. He worked at 2*700MW Coal-fired Jimah Power plant, Malaysia from 2007-2015 as an electrical maintenance section head. In 2015, he moved to Nilai University, Malaysia and presently working at Segi University, Malaysia as a Senior Lecturer under Faculty of Engineering, the Built Environment, and Information Technology. In the professional bodies, he is a Professional Engineer with Practicing Certificate (PEPC) registered with the Board of Engineers Malaysia (BEM). Apart from that, He is also a 33kKV competent electrical engineer (33 kV CEE) and Registered Electrical Energy Manager (REEM) certified under Energy Commission of Malaysia. Ir. S. Gopinath advocates industry-based research. His area of interest includes electrical maintenance related studies, renewable energy, energy storage, etc.

Vigna Kumaran Ramachandaramurthy completed his Bachelor Degree in Electrical and Electronics Engineering at the University of Manchester Institute of Science and Technology (UMIST), United Kingdom in 1998 under the Malaysian Government scholarship. He then pursued his PhD in Electrical Engineering at UMIST, UK, and completed his PhD in 2001. He joined the Malaysian electrical utility, Tenaga Nasional Berhad in 2002 as an electrical engineer. In 2005, he moved to Universiti Tenaga Nasional (UNITEN) and is presently a Professor and the Head of Power Engineering Unit in the Institute of Power Engineering. Prof Vigna has received many awards for research and leadership. In 2008, he received the ‘Institution of Engineering and Technology (IET) Mike Sargeant Award’. In 2009, he received the prestigious Institution of Engineers Malaysia (IEM) Young Engineers Award. He has also received many other research and consultancy related Awards. In the professional front, Prof Vigna has served in the following portfolios: Chairman of the Institution of Engineering and Technology (IET), Malaysia Section from 2009-2011, IET Council Member (2008-2010), Institution of Engineers Malaysia (IEM) Council Member (2013-2016), IET Younger Members Board representing West Asia (2007-2009) and IEEE Malaysia PES Excomm. Prof Vigna is also a Chartered Engineer registered with the Engineering Council of UK and a Professional Engineer registered with the Board of Engineers Malaysia. He is also in the Editorial team for IEEE Smart Grid Newsletter, IEEE Access, IET Smart Grid, and IET Renewable Power Generation. Prof Vigna advocates industry-based research and consultancy. His area of interest includes power systems related studies, renewable energy, energy storage, power quality, and electric vehicle. He is the advisor for many renewable energy developers and the RE industry in Malaysia. Prof Vigna conducts the technical feasibility of grid connected renewable energy plants in Malaysia. He was also the Principal Consultant and Lead Investigator to develop the “TNB Technical Guidebook on Grid-interconnection of Solar PV”, “Interconnection Guidelines for Electric Vehicle”, “Interconnection Guidelines for Distributed Generation” and “Interconnection Guidelines for Energy Storage” in Malaysia.