Around the globe, sustainable microgrids are emerging as a vital tool in the fight against climate change and increasingly common natural disasters. In the wake of hurricanes, earthquakes, and wildfires, the traditional energy grid in many parts of the world is struggling to keep the power flowing, causing outages that slow local economies and ultimately put lives at risk.

Microgrids are not a new idea and have been around for decades, but until the turn of the century systems relied almost exclusively on fossil fuels to generate power. It has taken another 20 years for solar panels and battery storage costs to fall far enough to make genuinely sustainable microgrids an economic reality. A recent surge in interest and installations have shown that they have reached an inflexion point and could very well be the future of clean energy.

PV-based microgrids would significantly enhance the ability of microgrids to serve communities during natural disasters or power outages. Malta is presently importing power from Sicily through a feeder interconnector to meet its total demand. The development of large sustainable microgrids will not only decrease the overall carbon emissions of Malta but can also aid in reducing imported power from Sicily.

In 2016 a living laboratory at the Malta College of Arts, Science and Technology (MCAST) started to be developed through the €1M ERANETMED1 initiative of Member States, Associated Countries and Mediterranean Partner Countries. The living laboratory that started through this 3DMicrogrid (Design, Development and Demonstration of a Smart Microgrid) Project (3dmicrogrid.com) integrated and optimized multiple small to medium sized energy sources and loads. The overarching objective is to capitalize on the availability of local and large renewable energy resources and adapting them for solutions to sustainability in terms of electric power demand and supply. Its concept have also been demonstrated at the Centre for Research and Technology Hellas (CERTH) Smart House in Greece and the German Jordanian University (GJU) campus.

The MCAST microgrid has over 63kWp PV installed capacity which are efficiently monitored and controlled along with the various electrical loads of the MCAST campus buildings. The building management system (BMS) with real-time online data collection and control integrated, as well as a geographic information system (GIS), has brought new knowledge and further opportunities to the student-based research at the MCAST Institute of Engineering and Transport. This energy resources integration was successful together with the support of the Malta Council for Science and Technology (MCST) (Grant ENM-2016-002a) through the ERANETMED initiative of Member States, Associated Countries and Mediterranean Partner Countries (3DMgrid Project ID eranetmed_energy-11-286) and local industrial partners GEOSYS Ltd. and SENSE Ltd., as well as a consortium of partners namely German Jordanian University, University of Cyprus, Centre for Research and Technology Hellas (CERTH), University of Seville, Energynautics (Germany) and National Polytechnic School of Oran (Algeria).

A parametric assessment on the demonstrated MCAST living laboratory microgrid revealed a zero running cost due to the deployment PV arrays on the roof of the buildings. The annual energy purchase expenditure (AEPEX) resulted in a reduction in the annual cost of around €130k from purchasing electricity from utility. Moreover, the levelized cost of electricity (LCOE) calculated on the basis of the installed PV capacity of 63kWP was found to be € 0.18€/kWh. Another estimate on the LCOE was obtained when using energy storage system which resulted in an increase in the LCOE cost to 0.54€/kWh due to an additional energy storage. Furthermore, reduction in greenhouse gas (GHG) emissions resulted at 32.38 ton of CO2 per year. This reduction in GHG emissions is equivalent to € 3,238/year (2019) in emissions trading market. The renewable energy penetration of the microgrid was at 7.85%, while the coverage for renewable energy sources was 36.1%.

The MCAST microgrid is the only living laboratory currently in Malta and will be a learning and research platform for the Mediterranean countries that will drive policy and skills for the current energy transition. The distributed energy resources of the electrical system are made up of 63.24 kWP of PV systems. These are distributed across the three buildings, having 21.12 kWP each on both Block J (Institute of Applied Science) and Block D (Institute of Business and Management Commerce) and 21 kWP on Block F (Students House). The main feeder at Substation 1 (SS1) is connected to the utility grid, which Enemalta PLC maintains through a Medium Voltage (MV, 11 kV) switchgear. This voltage is then stepped down to 400V using a step-down transformer. SS2 is connected from SS1 by an interconnection feed using a ring configuration and then stepped down to 400V. Thus, SS1 mainly feeds Block J while SS2 feeds Block D and F. 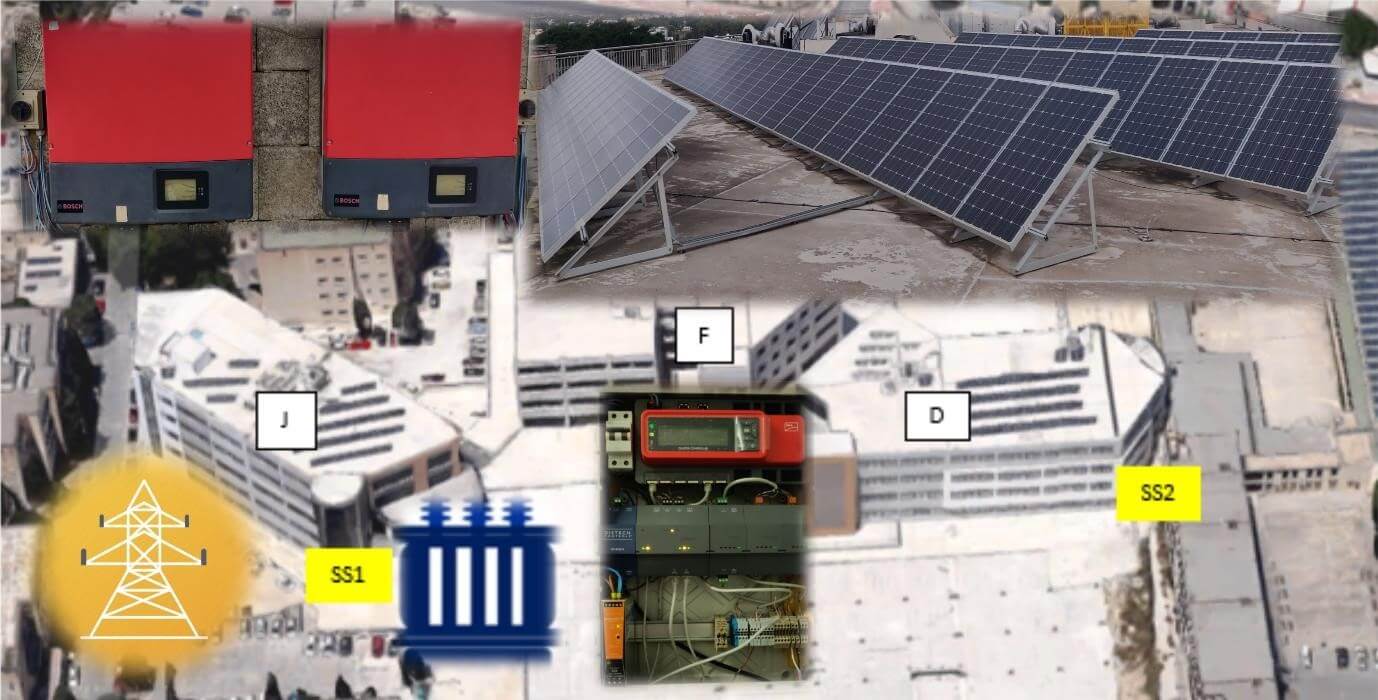 Living Laboratory of the MCAST Microgrid

This article edited by Jose Medina.

To view all articles in this issue, please go to March 2022 eBulletin. For a downloadable copy, please visit the IEEE Smart Grid Resource Center.

Vibhu Jately (MIEEE) obtained his Ph.D. degree in Electrical Engineering from the College of Technology, G. B. Pant University, Pantnagar, India in 2017. Following that he worked as a post-doctoral fellow with MCAST Energy Research Group, MCAST, Malta. Currently he is working as an Assistant Professor within the Electrical Cluster at the University of Petroleum and Energy Studies. He has over 8 years of teaching experience during which he has also worked under United Nations Development Programme in Ethiopia. His research interests include control in photovoltaic systems, control in power electronics and grid-connected photovoltaic systems.

Brian Azzopardi (SMIEEE) received the BEng (Hons) from UM and PhD from The University of Manchester in 2011. He also received teaching and pedological qualifications from MCAST (2008) and PGCHE from Oxford  Brookes University (2012). He is currently a Senior Lecturer II at Malta College of Arts, Science and Technology (MCAST), Visiting Senior Lecturer at the University of Malta (UM) and Consultant. Since 2011, he held senior academic and research positions in United Kingdom and Lithuania, and have served the industry, governments agencies and ministries and research since 1998. He is a Senior Member IEEE and member of The IET, EI, RSC and Chamber of Engineers. In 2008, he received the Eur. Ing. title followed by the CEng and the EI Chartered Energy Engineer titles in 2012. He is an editor and co-author of two books, 100+ research papers in peer-reviewed impact listed journals and conferences, and has been an invited speaker.

Somesh Bhattacharya (MIEEE) is a post-doctoral fellow at the energy research group of the Malta college of Arts, Science, and Technology. He did his PhD at the Indian Institute of Technology Delhi in 2018. His research interests are power system dynamics, and integration of renewable energy.

Renata Sadula works as Project Manager at Malta College of Arts, Science and Technology (MCAST). Her research interests are in renewable energy and clean technologies, sustainable development, environmental impact assessment and modelling of environmental processes. She has more than 10 years of experience in management from devising strategies to projects implementation.