The world has witnessed an ever-increasing deployment of solar PV generation, which is largely in response to mandates for energy independence and the environmental concerns resulting from the excessive consumption of the conventional fossil energy. However, the variability and the daily cycles in solar PV generation have introduced operational challenges to thermal power systems. Figure 1 illustrates the evolution of duck curve in the California Independent System Operator (CAISO) from 2014 to 2019. The duck curve will have a lower belly and longer neck as the penetration of solar PV generation continues to increase. The hourly duck curve variations are balanced by flexible generation resources, which place considerable ramping requirements on dispatchable thermal plants. 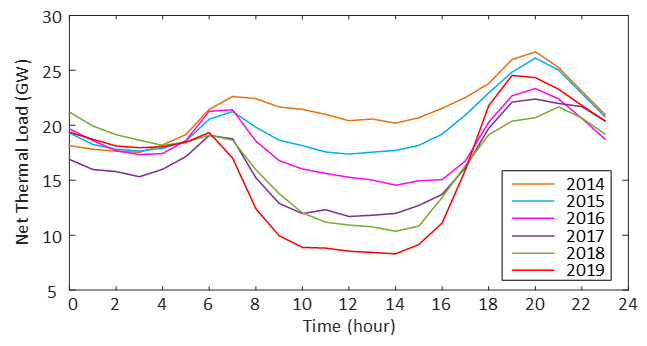 This article discusses the effect of COVID-19 on the duck curve. COVID-19 has become a global health threat, impacting 140 countries and triggering the World Health Organization (WHO) to declare it as a global pandemic. Correspondingly, governments have taken severe confinement measures, including restricting shopping markets, businesses, rallies, theaters, universities, and other crowd gathering activities. These confinement measures have led to significant reductions in daily commercial and industrial electricity demands while residential electricity consumptions are relatively stable as majority of businesses have switched to work-from-home option. Meanwhile, the collapse in oil prices has made coal the most expensive fuel in the world, with coal usage falling in the face of cheaper competition from natural gas and renewables.

Many global economies have taken strong measures in response to COVID-19, in which factories and businesses have halted operations and imposed significant impacts on respective duck curves. In many parts of the world, peak loads are drastically decreased by as much as 20% while the peak-to-valley load difference on the duck curve is increased by 5%. The changing net thermal load profile is expected to have major socioeconomic impacts in various countries and challenge the power companies by altering their energy utilization strategies and energy resource priorities.

Figure 2 compares the net thermal load curves in a China power company during the months of January and March of 2020 for illustrating the impacts of COVID-19 on power system operations. In January, COVID-19 started to spread widely when only few confinement measures were taken. Comparatively, in March, COVID-19 was spread widely and extensive confinement measures were introduced globally. Accordingly, the March peak load was decreased by about 13%, which could presumably alleviate major power system security risks since more generation reserves were to be available to deal with power imbalances. However, according to Figure 2, while the peak load demand in March has decreased by 13%, the peak-to-valley load difference increased by around 5%. The larger peak-to-valley load difference were to be balanced by more flexible generation resources, which was viewed as troublesome by power generating companies, which lacked reasonably-priced generation alternatives in their portfolios.

Figure 2: Comparison of Net Load Curves in January and March (Before and After COVID-19 Spread)

The change in load profile due to COVID-19 will continue to challenge power companies and grid operators in various countries. Some of the more imminent issues are highlighted here:

(1) Lack of thermal generation flexibility: Fewer thermal generating units are to be committed due to a reduction in daily load, while the increased peak-to-valley load difference (See Figure 2) requires more grid-forming units to provide the additional ramping flexibility. Lack of sufficient flexibility might lead to inevitable curtailments of additional renewable energy at certain hours. In such cases, a clear option is to resort to demand response for increasing the power grid flexibility. One third of the US residential loads are assumed to be flexible (i.e., thermostatically adjustable loads), which include plug-in electric vehicle charging, dishwashers, air conditioners, water heaters, pool pumps, and behind-the-meter micro-generators which can serve as negative loads. With the availability of advanced monitoring, control, and communication technologies, it is possible to use aggregated levels of flexible loads as dispatchable resources for shifting and shaving power consumptions during peak periods. Flexible loads can significantly reduce peak-to-valley load differences in order to enhance the grid flexibility and increase the grid efficiency and reliability during critical days to come. We can also add more batteries (stationary storage at distribution substations and distributed batteries in electric vehicles) and resort to fast ramping generation units like small hydro and natural gas units which would be owned by utilities.

(2) Excessive voltage problem: It is envisioned that the load demand will be reduced further as COVID-19 spreads globally, while the solar PV generation will increase with the arrival of summer. In addition, reduced power consumptions could lower line loadings, which will lead to higher var-to-apparent power ratio and bus voltages. In such cases, a viable automatic generation control (AGC) would be very effective. Also, the opening of partially loaded lines could improve bus voltages. However, such drastic actions by system operators could expose power systems to n-1 types of risks and additional problems with maintaining the grid reliability. The voltage problem could also be exacerbated by the variability of solar PV generation (e.g., on partly cloudy days) which would lead to more frequent and larger voltage fluctuations and additional power quality issues. A similar problem applies to variations in nominal frequency.

(3) Lack of proper operation planning for coping with extreme conditions: Current power system operation studies have focused on issues like uncertainty, security, resilience, economics, sustainability, environmental concerns, etc., which have continuously demonstrated the potential benefits for accommodating renewable energy resources in a microgrid setting. However, the unexpected spread of COVID-19 has provided a new perspective in power system operation planning studies, which have highlighted the emerging roles of public health and political measures in profiling the electricity consumption. We witnessed the significance of proper operation planning on March 20, 2015, during the total solar eclipse. Several months in advance of the event, power system operators began evaluating the potential risks to the power grid and its customers, when a significant level of solar PV generation was lost during the total solar eclipse. It is safe to indicate that any such future studies should facilitate a better understanding of the significance of public health, political actions, and socioeconomic concerns on drastic measures facing power system operation planning.

Quan Zhou (SM’19) received the B.S. and M.S. degrees from the Department of Electrical Engineering, Shanghai Jiao Tong University, Shanghai, China, in 2011 and 2016, respectively. He received the Ph.D. degree from Illinois Institute of Technology, Chicago, IL, USA, in 2019. He is currently a Senior Research Associate in the Robert W. Galvin Center for Electricity Innovation at Illinois Institute of Technology. His research interests include microgrid operation and control, cybersecurity, 5G wireless communications, smart cities, and energy economics.

Mohammad Shahidehpour received an Honorary Doctorate degree from the Polytechnic University of Bucharest, Bucharest, Romania. He is a University Distinguished Professor and Director of the Robert W. Galvin Center for Electricity Innovation at Illinois Institute of Technology. Dr. Shahidehpour is a Fellow of IEEE, the American Association for the Advancement of Science (AAAS), and the National Academy of Inventors (NAI). He is a member of the US National Academy of Engineering.