The COVID-19 pandemic highlights another critical link between healthcare and electricity.  The preponderance of ventilators is electric, and ventilators are the key tool to reduce the likelihood of death from COVID-19.  So, electric power is not just important for the overall functioning of the facility, it is critical for direct patient care.

An important reason this fact is not newsworthy for mass media is that a major electrical outage has not occurred during the current pandemic.  The publicly available data indicate that the effect of the pandemic is to reduce total demand and shifting demand to more residential areas.  From a grid perspective, this likely reduces the risk of a widespread outage but may enhance the chance of local distribution issues and most importantly, hospitals can be located in largely residential areas.

The success so far is not accidental.  Both power companies and hospitals prepare and practice for extreme events.  Both are critical industries, so the public expects and pays for, a high level of resiliency in both.  For example, hospitals have back-up power in the unlikely event of a power failure.

The world is now experiencing a pandemic that overloads hospitals for weeks to months around the world.  Given sufficient number of stressed hospitals and sufficient time, power interruptions will occur. The back-up generators in some hospitals will inevitably not meet the demand presented by the overloaded hospital or will fail for one reason or another.  Back-up generator failure during emergency use is rare, but not impossible.  For example,  during Hurricane Irma, local governments workers in Southwest Florida had to venture out in the storm to fix a generator that failed at a medical shelter [http://www.govtech.com/em/disaster/After-Hurricane-Irma-Many-Ask-How-Safe-are-Shelters. html]  Given the past experience, it would not be surprising if isolated problems occurred between the time this paper is written and published.

After Hurricane Sandy, there was an emphasis on microgrids to enhance the resilience of the power grid.  This reflects the fact that while a highly interconnected grid is usually a cost effective and reliable way to distribute electricity, it is also vulnerable to spreading the effects of localized damage to wider areas.  At the same time, utilities worked to become better, faster, and smarter at mitigating and recovering from storm damage.

Transportation electrification is beginning to provide another option for resiliency.  Electric vehicles are microgrids on wheels.  Consequently, there has been research on how to use these vehicles for grid augmentation, routinely or in the case of an emergency.  The Pecan Street Project was a Smart Grid demonstration project in Austin, TX.  One of the things that it showed is that houses in the study typically drew an average power of about 1 kWh/h.  It did not take long to realize that a house with that power requirement could be operated indefinitely in Austin using rooftop solar and a hybrid automobile [D. P. Tuttle, R. L. Fares, R. Baldick and M. E. Webber, "Plug-In Vehicle to Home (V2H) duration and power output capability," 2013 IEEE Transportation Electrification Conference and Expo (ITEC), Detroit, MI, 2013, pp. 1-7.]

It is intuitive, however, that it would be a daunting engineering challenge to use cars to run a hospital.  Fortunately, the US Department of Transportation recently released a study that explored a higher power source, transit buses [https://www.transit.dot.gov/research-innovation/bus-exportable-power-supply-beps-system-use-strategy-investigating-use-transit].

The project developed a Bus Exportable Power Supply (BEPS) System to give hybrid buses the capability to act as on-demand, mobile electrical-power generators. This technology was developed to be useful in emergency situations when traditional power supplies are not reliable.

Although there tend to be generators available during emergencies, transit buses are particularly attractive because they can be driven to where they are needed.  While there are some types of emergencies, e.g. flooding, in which transit buses may be in high demand for evacuations that has not been the case in this pandemic.  Rather, as the pandemic worsens in a city, mass transit tends to be less used.

Modern hybrid electric buses can produce more than 200 kW of power, or the equivalent of the demand of about 200 houses.  This is not sufficient to fully power a large urban hospital, paralleling buses combined with demand management approaches could provide good ride through capabilities until a permanent solution is possible.  The DOT study predicted that for outages less than a weeklong, the transit bus was less costly than additional back-up power rental or ownership.

Obviously, buses do not automatically plug into buildings.  Both the bus and the building have to be modified to make a safe and reliable connection.  The DOT study modified one bus and building and demonstrated successful operation.

So far, the pandemic is underscoring the effectiveness of the planning and preparation of the utilities.  But as it spreads and lingers on, it is expected to expose isolated examples of lower reliability.  Grid and distribution operators will do what they can to strengthen their systems under this stress.  Hospital operators will try to assure excellent performance of their back up systems.  Emergency backup generators are available.  But transportation electrification promises to provide an additional disaster mitigation technology in urban areas- the areas hardest hit by the pandemic.

In the longer term, engineers are developing a smarter grid, smarter backup power, smarter vehicles that can provide power to the grid or, if the grid is down, directly to key loads, and smarter buildings.  As these systems begin to better communicate with each other, the world should be even better prepared to provide reliable power in future pandemics than it is today. 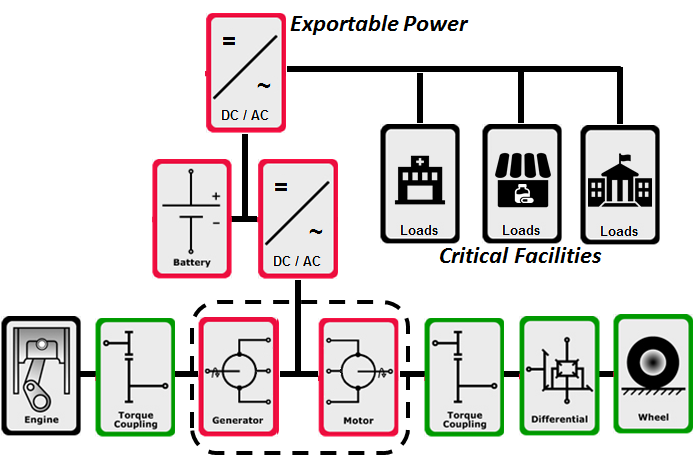 Schematic of the modified bus power train for dual use for mobility and a mobile power plant.  The change from a hybrid bus is the addition of an output converter.

Mr. Michael Lewis has over 20 years of experience in advanced research and technology development at the University of Texas Center for Electromechanics. Mr. Lewis’ early research focused on the development of an advanced high-speed generator for an electromagnetic aircraft launching system. Today he leads the center’s advanced vehicle technologies program. His current interests involve alternative fuelled vehicles and renewable power, including hydrogen and natural gas powered vehicles, and alternative energy sources. His team has developed, built, and tested fuel cell hybrid vehicles ranging from small neighborhood electric vehicles to transit bus to medium duty trucks and vans. Mr. Lewis was also the recipient of a Department of Energy ARPA-E award for home refueling of natural gas vehicles, and he will soon begin another DOE program for H2@Scale demonstration on campus. His research team aims to advance the state of alternative fuel technologies and provide technology transfer to industrial partners which will accelerate the adoption and commercialization of alternative fuels for transportation.

Bob Hebner is the Director of the Center for Electromechanics at the University of Texas at Austin. The Center develops advanced technology, generally in the areas of power and energy, and teams with companies to get the technology into the market. Important current projects involve transportation electrification, use of nanotechnology to achieve compact power systems, grid and microgrid resiliency, and the infrastructure for large scale autonomous systems.Before joining the University of Texas, he spent many years at the National Institute of Standards and Technology (NIST), as a member of the Senior Executive Service, culminating his time there serving as acting Director. He also worked in the Office of Management and Budget and at the Defense Advanced Research Projects Agency.Throughout his career, Dr. Hebner has been active technically having authored or coauthored more than one hundred and fifty technical papers and reports. He is a fellow of the IEEE. His IEEE activities have included serving as the president of the Dielectrics and Electrical Insulation Society twice, a Division Director and the vice president for Technical Activities. He spent three years as a member of the IEEE Board of Directors