The open source Distribution System Simulator, OpenDSS, is a comprehensive electrical power system simulation package for electric utility power distribution systems. It has two modes: sinusoidal steady-state simulation, and time series (or quasi steady-state) simulation. Both are very efficient and useful for many analyses. Multi-Agent OpenDSS, MA-OpenDSS, is built upon OpenDSS. The MA-OpenDSS incorporates an asynchronous, local, possibly varying communication architecture, enables a set of virtual nodes (called virtual leaders) to coordinate local data sharing and actions, includes programmable dynamic blocks for behaviors of distributed energy resources, and implements a host of distributed and cooperative algorithms of estimation, optimization and control, as shown in Figure 1. It is specifically developed to simulate and investigate self-organizing microgrids and large-scale electricity distribution networks with extremely high renewable penetrations. This article provides a summary of MA-OpenDSS main features and functionalities.

The MA-OpenDSS platform consists of three major components, 1) the modeling & simulation engine is based on the OpenDSS with added functions including, generic distributed energy resource (DER) modeling to implement distributed control strategy, solver improvements to include distributed control, distributed communication modeling, and data processing and visualization; 2) the multi-agent system architecture includes a hierarchical and distributed communication and control architecture, shown in Figure 2, combined with the OpenFMB standard to enable the lower level communication between intelligent entities and nodes, and the upper level communication between intelligent devices and a central system operator; and 3) the solution algorithms include distributed estimation, control and optimization [1], which enable advanced functionality at both the device and local levels and integrate them into the system level in a fully modular manner and with enhanced system-level solutions. These innovations build up a modular, plug-and-play, and scalable platform for real-time operation and control of large-scale distribution networks with high DER penetrations. 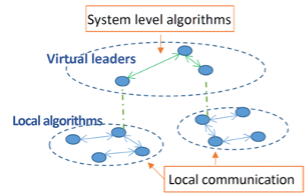 The MA-OpenDSS platform also enables the development of advanced distribution management system functions, including 1) an online multi-level distributed stochastic optimal power flow (OPF) based on a reverse-forward engineering procedure and dynamic, real-time, distributed feedback control for three-phase unbalanced distribution system; 2) an online distributed system state estimation (SE) algorithm based on prediction-correction methods for time-varying convex optimization, and with the joint real-time SE-OPF solver to calculate OPF based on the estimated voltage for more practical implementation; 3) the distributed Volt/VAR optimization and frequency control algorithms to optimally dispatch the real and reactive power of multiple DERs based on distributed cooperative control and optimization, with the robust performance against communication delays; 4) the distributed distribution system restoration strategy to optimally determine the PV generation, network configuration, switching status, and load pickup, in order to restore the entire system or energize unfaulted out-of-service areas, as well as to coordinate the restorative actions between transmission and distribution networks; and 5) the distributed PV hosting capacities with cooperative Volt/VAR and Volt/VAR/Watt control to provide recommendations for customers and the utility company.

Moreover, the advanced functions are tested in 1 million (1M)-node distribution system on the MA-OpenDSS platform. The 1M-node distribution system has been designed by combining ten 100k-node test systems from two larger fully synthetic test systems from NREL and San Francisco Bay Area. Furthermore, a two-stage greedy search algorithm is developed to find a realistic worst-case scenario for 100% PV penetration, considering both the location and the size of the PVs in the primary and secondary nodes of a feeder, in order to validate the effectiveness of the developed distributed functionalities [2].

Conclusions: The MA-OpenDSS is an effective, open-source tool to conduct simulations of DERs and their controls in distribution and/or transmission networks. It has been available and used in several settings: 1) Enhanced OpenDSS-G (OpenDSS Graphical User Interface) which includes MA-OpenDSS functionalities allowing the user to visualize and interact more directly with the distribution network and all its elements without needing to code [3]; 2) Simulation of distribution network with large-scale and/or small-scale PV/DERs (either 2019-version integrated into OpenDSS [4] or the 2021 updated version [5]); 3) Co-simulation of transmission and distribution network with high-penetration DERs; 4) Hardware-in-the-loop (HIL) and power hardware-in-the-loop (PHIL) simulations; and 5) Integration with other open-source tools (such as OpenFMB and Helics) as well as commercial software (such as ADMS and/or DERMS) for real-time implementation.

To the best of our knowledge, MA-OpenDSS is the first and only platform that can be used as a planning tool to systematically perform control-enabled hosting capacity analysis. When used as a real-time control and optimization tool, it can eliminate or substantially reduce curtailment through effective reactive and active power controls. These features enable and support extremely high penetration of PVs.

For a downloadable copy of the May 2021 eNewsletter which includes this article, please visit the IEEE Smart Grid Resource Center.

Ying Xu (Member, IEEE) received the B.Eng, M.Eng, and PH.D. degrees from Harbin Institute of Technology, China, in 2003, 2005, and 2009 respectively. From 2009 to 2017, he has been a Senior Engineer in North China Grid Dispatching and Control Center. From 2017 to 2020, he was a postdoctoral research scholar at the Department of Electrical and Computer Engineering, University of Central Florida (UCF), USA. He is woking as the chief scientist of Beijing QCTC tech. company. His main research interests and experiences include power system analysis and control, power system modeling and simulation, cooperative control, electriclal power market, and distributed control and optimization for networked systems.

Inalvis Alvarez-Fernandez received her BS(2018) and MS(2020) degrees in Electrical Engineering from the University of Central Florida. She is currently pursing her Ph.D. with concentration in Power Systems. Her research interests include DER_A model parameterization, machine learning application in power systems, and parallel transmission and distribution co-simulation. She has obtained internships at Electric Research Institute (EPRI) and Lawrence Livermore National Laboratory (LLNL). She was involved in projects relating the high integration of DERs, parameterization of the aggregated DER_A model and implementation of power grid transmission and distribution co-simulation using CYMDIST, GridDyn and HELICS executed on HPC.

Zhihua Qu received the Ph.D. degree in electrical engineering from the Georgia Institute of Technology, Atlanta, in June 1990. Since then, he has been with the University of Central Florida (UCF), Orlando. Currently, he is the SAIC Endowed Professor in College of Engineering and Computer Science, Pegasus Professor and the Chair of Electrical and Computer Engineering, and the founder and director of RISES, a university-level research center. His areas of expertise are nonlinear systems and control, with applications to energy, power systems, and autonomous vehicle systems. In energy systems, his research covers distributed energy resources, dynamic stability of power systems, anti-islanding control and protection, distributed generation and load sharing control, distributed VAR compensation, distributed optimization, and cooperative control. Currently, he is serving as Past President of ECE Department Head Association, an inaugural member of Engineering Leadership Multi-Section Alliance’s Standing Council, and IEEE liaison to Smart Grid Steering and Operational Committees.

Dr. Wei Sun is currently an Associate Professor and Director of Siemens Digital Grid Lab in the Department of Electrical and Computer Engineering at the University of Central Florida (UCF). He received his Ph.D. degree from Iowa State University in 2011, and his M.S. and B.S. degrees from Tianjin University in 2007 and 2004, respectively, all in Electrical Engineering. He joined UCF as an Assistant Professor in 2015, and before that, he was an Assistant Professor at South Dakota State University, a power system engineer at Alstom Grid, a visiting scholar at the University of Hong Kong. His research interests include power system restoration, self-healing smart grid, and cyber-physical system security and resilience. He is the Co-Chair of IEEE PES Working Group on Power System Restoration. He received Microsoft Research Software Engineering Innovations Award in 2014.