Streetlights are a key asset in any city as they provide a sense of safety and security to the public, especially pedestrians, and increase the quality of life by artificially extending the day. Streetlights that are smart and operate intelligently and autonomously can provide added benefits of additional lower energy consumption and lower carbon emissions [1], [2]. Such an asset can also provide the extra connectivity and sensor data flows required to allow algorithms centrally or locally deployed to act on relevant information to optimise asset energy usage and provide a degree of automation of operation. This article will discuss a smart street lighting system developed by Autonomous-IoT, a UK-based SME.

The Smart aspect of the lighting system can include detection of scenarios where light is required using sensors such as PIR, and integrated CCTV cameras can also enhance safety and security. Optimal control of smart lighting load has a clear benefit to the goal of energy efficiency, however, added local electricity generation and storage to adopt an architecture similar to that of a nanogrid [3], [4] enhances the benefits further.

The technical challenge of deploying smart streetlights is first of all to instrument them appropriately, with the right level of onboard processing capability to enable the design goal functionality.  Even a smart streetlight requires an energy source, and the concept of smart cities requires optimum efficiency and adaptability, which indicates that renewable energy sources like wind and solar are means of controlling and reducing the energy consumption, potentially allowing smart streetlights to operate in rural and off-grid scenarios in the future. The local processing and monitoring hardware should be paired with appropriate communications capability. Adding remote monitoring and control means a communications channel is required, and this must have suitable bandwidth and power consumption characteristics to work within the streetlight generation and consumption limits. Examples of this approach discussed in [1], [2], [5–7] often use wireless communications such as 4G, GSM, LoRaWAN or NB-IoT which all provide monitoring bandwidth, secure protocols, and low power consumption. However, integration with a remote monitoring and control system is necessary to realise the potential of smart devices. This is a parallel challenge which requires software development to work seamlessly with innovative hardware architectures.

Smart streetlights in the last few years have taken advantage of the wide availability of low-cost microcontrollers such as Arduino and Raspberry Pi systems [2], [7] and used a range of control algorithms and controllable loads to deliver lighting systems which can react to weather conditions such as fog [2], [6], the presence of pedestrians and the passage of cars at variable speeds [8]. Integrated CCTV systems have been demonstrated, delivering on the promise of safe and secure lighting [9].

Adding local generation into the proven smart streetlight concept has the potential to make the type of control required much more aligned with the concept of autonomous miniature DC grids that have been proposed for use within homes, to connect small groups of homes, and to form local parts of DC microgrids [10], [11]. This opens the possibility of much more sophisticated distributed control which can optimise individual device state-of-charge, minimise energy losses, and also reduce the cost of charging. Such capability is not an innovation for its own sake, instead it can be viewed as a future requirement to provide overall system reliability and availability, since local storage provides energy reserve for continued off-grid operation. Further, optimal device power-sharing and charging strategies will reduce the likelihood of smart streetlights being unavailable. Autonomous-IoT’s smart streetlight is a good example of this approach, where the architecture of their smart streetlight has taken the core smart streetlight concept and added renewable generation using an integrated photovoltaic panel and vertical axis wind turbine shown in Figure 1 and Figure 2. 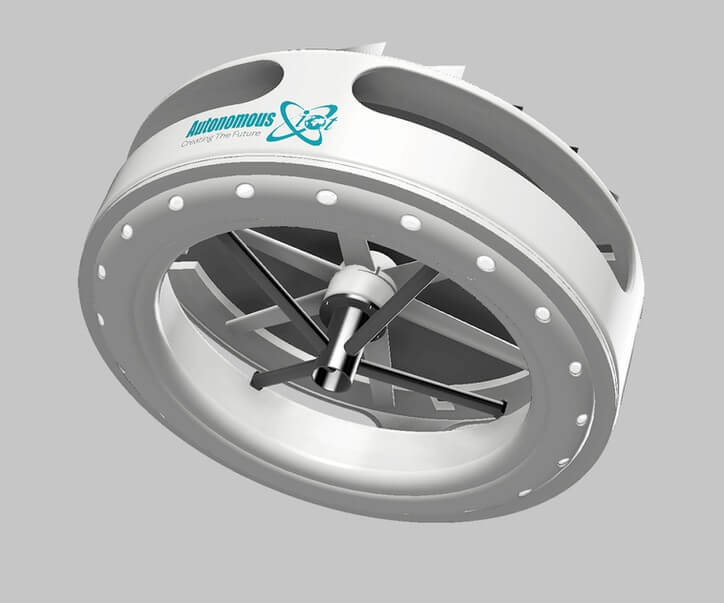 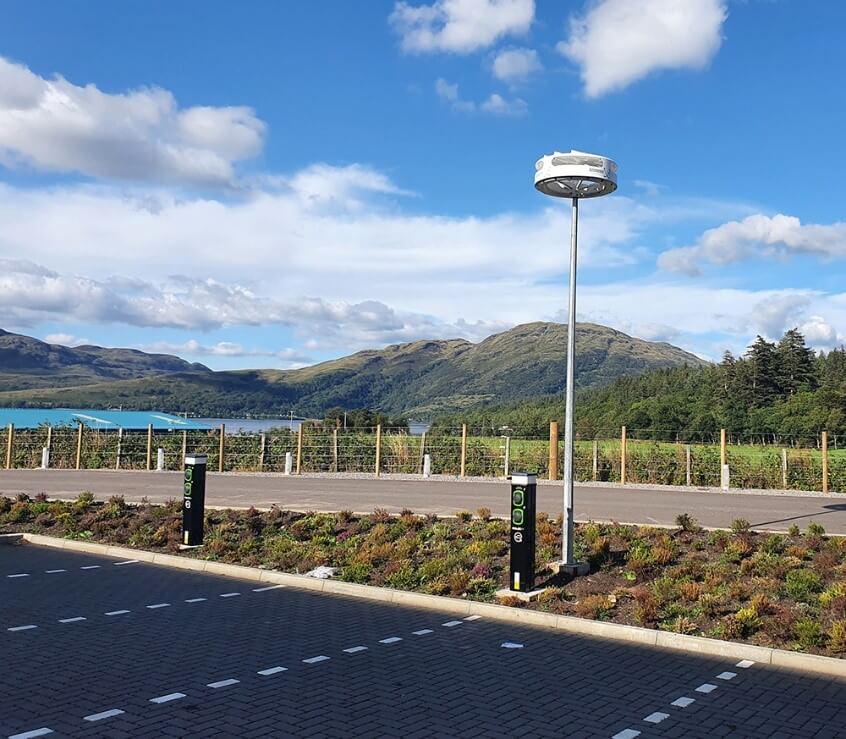 Each smart streetlight contains an onboard low voltage DC bus, with Maximum Power Point tracking control of the PV panel. Autonomous-IoT use their own developed IP controller board which delivers the capability to optimise the power consumption of the lighting and camera systems based on usage and monitoring of internal parameters such as battery state of charge as well as external parameters such as time of day. This system incorporates a vertical axis wind turbine into the design, generating renewable energy to supplement the PV module in charging the system battery. 4G communications capability is adopted, with other options such as Wi-Fi and GSM available depending on the installation site. Autonomous-IoT’s smart streetlight typically has an installed PV rating of 56W, a design rating for the vertical axis wind turbine of 300 W, battery capacity of 70 Ah at 12V, including up to 4 integrated CCTV cameras, and a lighting capability of up to 5700 lumens. Combination of wind and solar generation capability enables a lower battery capacity requirement as lower autonomy of 1 day is sufficient.

State-of-the-art nanogrid deployments [12–14] have a different set of goals:

Using the nanogrid concept to augment smart streetlight functionality makes energy usage optimisation a key operating principle of one or multiple smart streetlights operating together. This is expected to bring benefits in terms of cost of operation and overall efficiency, and existing hardware used to deliver smart streetlights fits the majority of hardware and communications requirements.

A smart grid, whether national or nano in scale, should have the capability to monitor its own energy consumption, and maintain voltage and current within optimal limits. The nanogrid architecture of smart streetlight system follows this conceptual requirement and therefore as control systems are optimised and capabilities are added, the potential is there to provide new grid services and communications services, based on the nanogrid concept of distributed energy resource and storage management. Reducing the cost of ownership of streetlights with these smart capabilities by optimising energy use, minimising carbon emissions, is an exciting avenue for development as smart cities are realised in the future. The benefits of the smart streetlight in nanogrid configuration are to minimise energy consumption, using local generation, storage and smart control of lighting load and CCTV cameras.  With the additional integrated renewable energy generation capability combined with smarter control of the lighting and CCTV as demonstrated by Autonomous-IoT, we estimate energy savings over a traditionally controlled LED streetlight of 30% or more [1]. On units with just smarter control considerable savings could be achieved by the use of PIR movement sensors. Also a site is likely to have a combination of smart street lights with and without CCTV to optimise the energy usage.

This article is based on the joint research by Autonomous-IoT and PNDC. Autonomous IoT have developed their original design of a smart streetlight to add in the extra capabilities. The streetlight internal smart control to optimise DC power generation and storage has been tested and validated in the field, with the system available commercially. PNDC, based in Cumbernauld Scotland, are an industry-facing innovation hub affiliated to the University of Strathclyde, and have strong expertise in simulating power systems and performing Hardware-In-Loop trials to validate system and component-level power system behaviour in the real world. PNDC test smart grid technical solutions with a particular focus on the power distribution network and are developing methods of integrating energy resources as whole-energy systems. PNDC are assisting Autonomous-IoT in simulation work to understand the optimal way to operate a collection of nanogrid smart streetlights as a microgrid, which can optimise battery state of charge, minimise power losses, and potentially export excess power to the grid. Autonomous-IoT plan to test a prototype of this concept in 2023.

This article was edited by Julio Usaola.

To view all articles in this issue, please go to May 2022 eBulletin. For a downloadable copy, please visit the IEEE Smart Grid Resource Center.

Sivapriya M. Bhagavathy (Senior Member, IEEE) received the B Tech degree in Electrical and Electronics Engineering from the University of Kerala in 2006, M Tech in Energy Systems Engineering from Indian Institute of Technology, Bombay in 2008, and the Ph.D. degree in Electrical Engineering from the Northumbria University in 2018. She is a Lead R&D Engineer (Whole Energy System) at PNDC, University of Strathclyde and a visiting researcher at the University of Oxford. Her research interests include distributed generation and its grid integration, whole system perspective of energy analysis, multi-vector demand-side management, role of hydrogen in the multi-vector energy system, energy policy, evaluation of government intervention, electric vehicles as load and storage, and electric vehicle infrastructure planning.

Joseph Melone received the B.Sc. Degree in Physics and Astronomy and the Ph.D. degree in Experimental Nuclear Physics from the University of Glasgow, in 2000 and 2005 respectively. Since 2014 he has worked as an R&D engineer at PNDC, an industry-facing innovation hub affiliated with the University of Strathclyde where the focus is on power transmission and distribution networks and the industry drive to make these vital systems smarter, more flexible and reliable in a future Net Zero economy.  His research interests include integrated energy systems, power system and power electronics modelling, and the use of IoT technologies to realise the remote monitoring and control of interconnected systems within the energy sector.