Blockchain Technology for Decentralized Energy Transaction in a Smart Grid

The transformation of the power grid from conventional to smart is being driven by an underlying transition towards sustainability for which a secure and systematic way of integrating renewable and non-conventional energy resources is essential. Further, the internet-based smart grid is paving the way for a group of innovative technologies, collectively being called as the ‘energy internet’, to ensure that the demand for energy is met at any instant of time. Reiterating, the main objective of this change is to enable a sustainable energy system. The integration of Information Technology (IT) with Operational Technology (OT) is at the crux of a smart grid although, however, the integration and centralized management of various actors like smart meters, Renewable Energy (RE) sources, Distributed Energy Resources (DERs), loads, and Internet of Things (IoT) devices etc. is a major challenge. The smart grid is moving towards a decentralized paradigm from a centralized topology to effectively integrate more and more resources spread across time and space in such a way that quality services are provided to the end customer without compromising on the integrity of all the stakeholders including the utility grid. With large scale energy and information transactions over the smart grid, cyber-security is becoming equally crucial. The blockchain technology possesses several outstanding attributes which provides an excellent platform for smart grid security and privacy. In this article, an overview of blockchain for decentralized energy transactions in a smart grid setup has been provided.

Since the past decades, the conventional centralized energy systems have had various issues such as rising carbon emissions, losses in long-distance power transfer, and energy inefficient consumption at load-end alongside lack of consumer participation. The transition towards a sustainable energy system is being facilitated by solutions that address and highlight those challenges. Incorporating DERs as well as improving the efficiency in energy consumption are two key fundamental solutions. The usage of distributed RE sources aided by intelligent control & communication technology and advance metering infrastructure makes the despatch, consumption, and metering of green electricity much effective. The concept of the future grid has been envisioned and is being implemented to provide bidirectional energy flow and information sharing over a secure platform to enhance the management of energy by integrating RE technology. It is being noticed that the present smart grid is facing several difficulties to improve the usage of DERs and manage integration of scalable energy resources (i.e., hydropower, geothermal) at a large scale [1,2]. There are also issues to ensure security and a reliable integration of other technologies to enhance efficiency and reliability [3]. The energy internet is an amazing solution for meeting the future energy challenges since it can take care of the real-time status of all the actors in the system with the help of IoT devices, intelligent communication and IT-OT including consumer participation [4]. Such a technology-framework coupled with the elements of the utility system including electricity markets at the retail-level will enable consumers (including ‘prosumers’) to actively participate as ‘peers’ and optimize the overall energy balance in the system. Accordingly, the next generation smart grid has been conceptualized with an aim to fulfil the following objectives for all participants as well as system components:

As discussed above, the main points regarding centralized energy system must now be miniaturized in a decentralized-distributed setup. The increasing democratization of energy also calls for market-driven forces to ensure the most appropriate value for ‘green’ power for a consumer/prosumer.

Recently, the Energy Internet has presented itself as an improved variant of the present smart grid system with a powerful capability to collect, refine and analyse the information on energy generation and consumption to optimize the overall energy balance and operating costs for the stakeholders involved. The main goal of the Energy Internet is being seen as the capability to overcome the present smart grid limitations and to a build a fully automated intelligent power system. The basic idea is to share the information related to generation and consumption, utility-grid component status, and market with each participant in a transparent yet secure and trust-worthy manner. The local generating units, real-time demand, microgrid and DER operational information, energy storage units, consumers, and local energy markets, etc are identified as the main sectors.

A decentralized energy network provides for excellent features such as bidirectional energy and information flow between consumers/ prosumers and the utility at the local community level. Future energy systems are expected to witness an increase in the count of prosumers and consumers in a decentralized energy sharing landscape. As such, prosumers would be capable of sharing their excess generation with nearby peers. This type of energy flow supports in reduction of on-grid peaks, reduces power transmission losses, and matches supply-demand at the local level, which provide the utility operator with more observability and flexibility in power scheduling operations. The prosumer can trade directly with others without any third-party involvement and at very low transaction costs. This is where the distributed ledger technology or the blockchain would be of utmost importance. This type of trading, in general, will have some challenges, higher operational difficulties as well as regulatory issues and costs which will reflect on prosumers, producers, and consumers. In addition, cyber-attacks, breach of data privacy and security and malicious decisions due to attacks can lead to third-party monopolies in ineffective operation of such local energy markets with inequitable distribution of rewards, incentives, and penalties. The key features of blockchain technology provides an excellent tool for creating a more reliable decentralized and open energy market. A few pilot projects have already started in India for encouraging a digitally enabled local marketplace in the country within a distribution utility’s license area. [5]

Cryptocurrency, smart contracts, and cryptography are the key terms in relation to blockchain technology. Blockchain works on digital platforms. In the cryptocurrency area, that is like copying coins from one user’s digital wallet to the other user’s digital wallet, ensuring that one coin is only spent once with proper time-tracked informational record. To automate the execution process of the terms and conditions agreed in the ‘smart-contract’ on the blockchain, all the participants can instantly take self-decisions without loss of time through a consensus to validate each record against a transaction. This process is executed with the help of the smart contract itself which is a predefined script containing the terms and conditions which works in such a way that when the script matches the private encryption key, only then the program will execute. They can agree to the next action only if the terms and conditions are met. The cryptography element provides for the security and protection of data at the time of communication. The unique encryption feature helps to prevent cyber-attacks from accessing any secure information. Thus, encryption and decryption and the consensus mechanisms to validate the various transactions on each block are the key pillars of the blockchain technology.

Figure 1 below illustrates the basic overview of use of blockchain technology in a local energy market. The prosumers can become sellers as well as buyers based on the amount of excess generation and demand respectively. Prosumers receive a better deal for their excess green energy in the local marketplace and get instantly compensated for through a system of tokens and wallet. The consumers, as buyers of electricity, get green power at cheaper rates; the prosumer 1 has more self-generation than its own demand, so it becomes a seller, and prosumer 2 has more demand than self-generation, thus becoming a buyer, at that instant. The lone user who does not have a PV system, remains as a buyer with choice. The buyer purchases energy from the seller and deposits purchased energy costs directly into the seller's wallet in form of an energy coin/token. Each user has a digital wallet which holds the energy coin, with the wallet only being accessible by the user using a private key. All energy transactions between seller and buyer are done by recording data in the memory pool by the transaction server. For each transaction, there is an indirect interaction between the memory pool, credit bank, account pool, and the controlling server. An energy aggregator is an energy service provider, which can moderate the electricity, money, and other information of a group of consumers/prosumer according to demand. To improve the decision time-delay between transactions, various consensus algorithms have been used in the blockchain. In addition, blockchain technology supports distributed ledger storage, distributed computing, smart contracts, consensus mechanisms, can form a consensus non-forgeable ledger, which is computed retrospectively through the ledger. With the characteristics of decentralization, openness, autonomy, anti-tampering, blockchain realizes the recognition of the whole organization and users and can better adapt to the electric energy data in terms of operation mode, topological form, security protection and meet the requirements for safe and reliable sharing of electrical energy data. 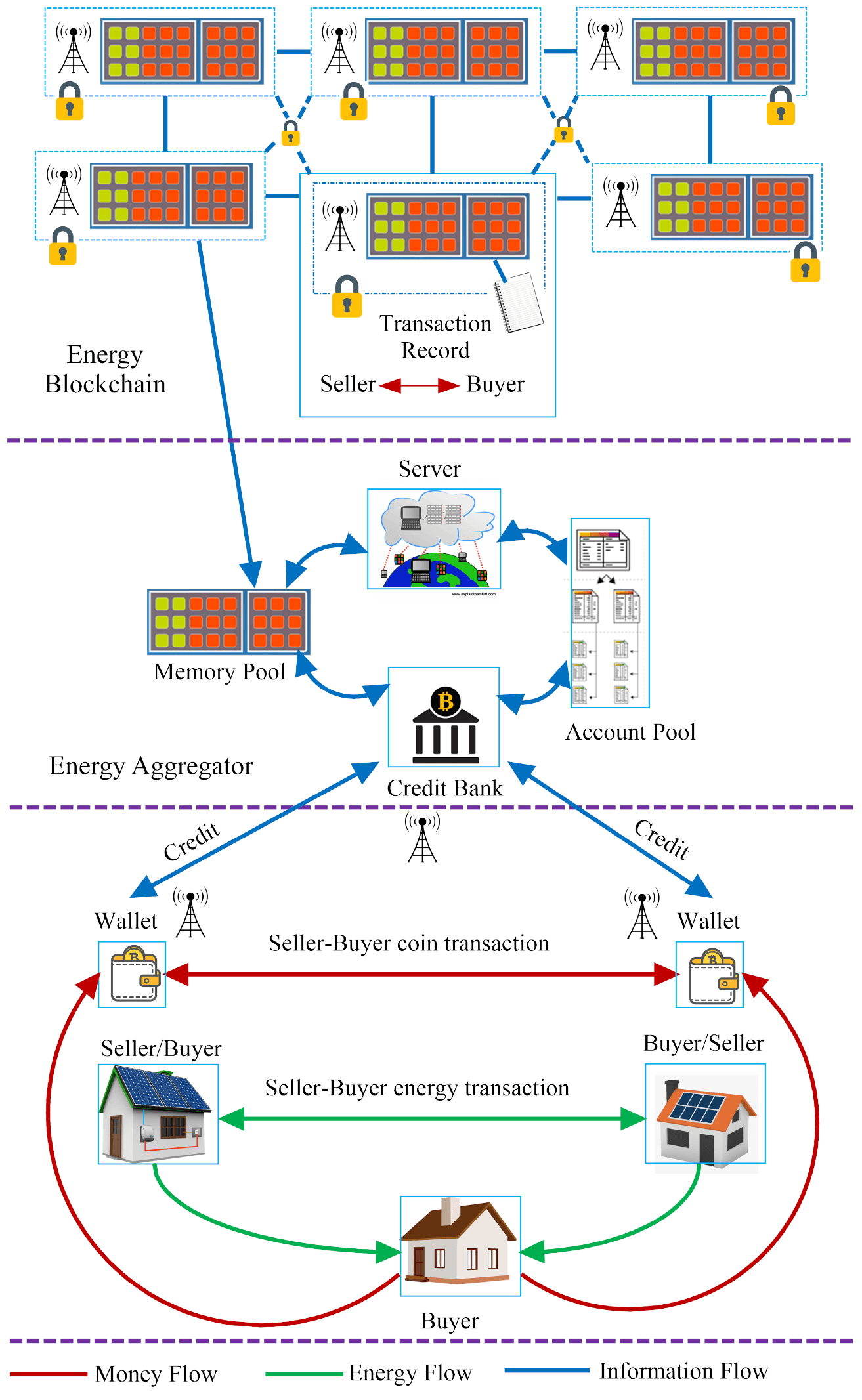 This article edited by Mehdi Moghadasi

To view all articles in this issue, please go to November 2021 eNewsletter. For a downloadable copy, please visit the IEEE Smart Grid Resource Center.

Shashank Vyas works as Manager-Innovation in the Energy Storage vertical of SBEnergy Private Limited, a Softbank group company. He is currently involved in executing new ideas on energy storage and EVs. Prior to this, he was with the Electricity and Fuels Division of TERI as an Associate Fellow for 3.5 years where he handled research projects in the domain of distribution systems and the BESS control validation and pilot implementation components under the Indo-US project on distribution level battery energy storage. He was also involved in projects related to implementation of blockchain based solutions for P2P trading of rooftop solar power in distribution networks. He has a cumulative 6 + years of research experience in distribution system analysis and machine learning applications to smart grids. Prior to joining TERI in August 2017, he worked in the position of National Renewable Energy Fellow under MNRE fellowship at National Institute of Technology Jaipur.

Rajesh Kumar (M’08–SM’10) received the B.Tech. (Hons.) degree in Electrical Enginnering from the National Institute of Technology (NIT), Kurukshetra, India, in 1994, the M.E. (Hons.) degree in power systems from the Malaviya National Institute of Technology (MNIT) Jaipur, Rajasthan, India, in 1997, and the Ph.D. degree in power systems from the University of Rajasthan, Rajasthan, India, in 2005. Since 1995, he has been a Faculty Member with the Department of Electrical Engineering, MNIT Jaipur, where he is currently associated as a Professor. He was a Postdoctoral Research Fellow with the Department of Electrical and Computer Engineering, National University of Singapore (NUS), Singapore, from 2009 to 2011. His research interests include theory and practice of intelligent systems, computational intelligence, and applications to power system, electrical machines, and drives.