In the first part of this work, eight scenarios were proposed to economically select an optimal design of a Hybrid Renewable Energy System (HRESs) using NSGA-II algorithm to minimize the Loss of Load Probability (LLP) and Cost of Energy (COE) with an optimum Depth of Discharge (DOD). These scenarios take into account the sizing of Perhentian island in Malaysia. Based on the optimization ‎results from part 1 [1], the lowest cost of energy associated with the highest reliability for the solar PV/ BES system ‎was achieved at 79% DOD. The results show that the proposed method is capable of optimizing the hybrid system. The use of this method can pave away some of the technical challenges that hinder hybrid system projects and it can be used as a support tool to promote off-grid rural electrification projects.

Energy Flow Strategy of the HRESs

Figure 1 shows the flowchart for energy flow and the proposed sizing methodology used for HRESs using NSGA-II method that considers PV energy flow models and hourly load profile. Moreover, the number of net energy calculations is equal to the possible number of PV modules in the optimization area. In addition to improvements, using an accurate load profile based on real data leads to a fast and accurate optimization algorithm. The PV module, DG model, and the battery model were optimally selected to satisfy the demand. The figure illustrates the simplified design steps that will be implemented for the four cases as follows: 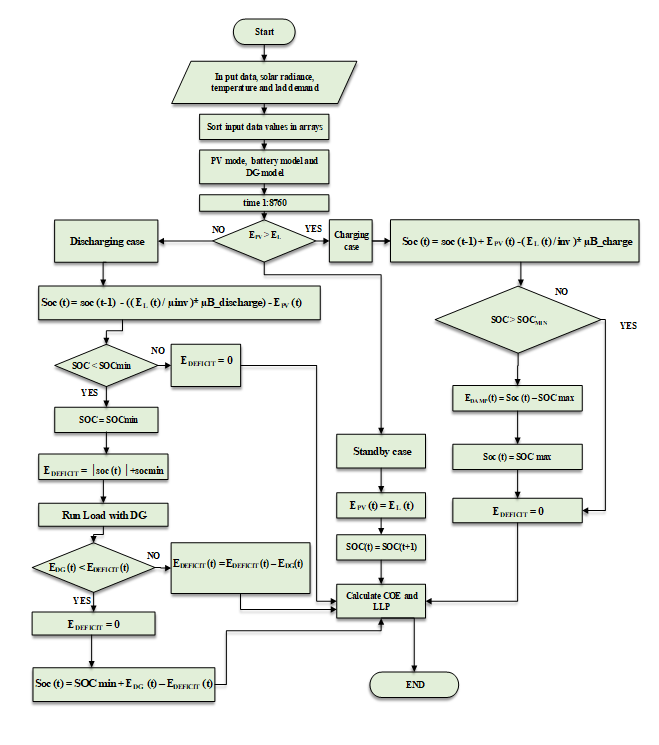 The final step of the optimization process specifies the components utilized in the system, like the capacity of PV, DG and battery as well as, the optimal value of COE and LLP.

Where ATC is the total annualized cost, and it can be expressed by the following equations:

CPV = Capital cost of solar PV (RM) where, CPPV is the estimated project cost for solar PV (RM / kWp). PPV is the rated power (W), NPV is the number of solar PV, CB is the capital cost of battery (RM). CBBAT is the estimated project cost for BES (RM / kWh), Cn is the capacity of battery (Wh). NB is the number of battery, CDG is the capital cost of DG (RM). Cdg is the estimated project cost for diesel generator (RM / kW), PDG is the rated power (kW) and Cg is the generation cost of DG including fuel, operation and maintenance (RM / kWh). The proposed method is examined, by using MATLAB Toolbox software, based on the selected population size of 200 and 0.80 for crossover. Meanwhile, the optimization procedure aimed to find the numbers of variables such as NPV, NBES, NDG and DOD to actualize LLP and COE minimization as proposed.

The NSGA-II method minimizes two objective functions: LLP and COE. Contrary to single-objective optimization, the solution of this method is not a single solution but a set of solutions known as a Pareto optimal set (a Pareto front). Fig. 2 shows a set of solutions obtained from this algorithm in one year. Each solution represents the LLP and COE that demonstrates the multi-objective optimization set of solutions. From this figure, one particular LLP against COE is selected. This figure presents seventy solutions, since any of the solutions can be optimum, hence no improvement can be achieved without computing the objective function.

To help select the best solution among the several solutions on the Pareto-optimization, Table 1 shows the optimal point that satisfies cost and reliability, the tradeoff concerning cost and reliability between the two objectives has been achieved. The outcome of the optimization method presents the lowest cost with the highest reliability. The results show that the NSGA_II provides optimum PV, BES, and DG ratings according to the optimal DOD. The outcomes are clarified in terms of the energy cost with zero LLP for each strategy. The best-founded solution is presented in this table. The table shows the energy produced of the solar PV, BES and DG to determine which option is the most economical to implement. As shown, the NSGA_II approach produces acceptable sizing for each strategy. The first strategy has fewer DG numbers compared to the other strategy, thus it indicates that the generators operate as a backup source. As a result, the NSGA_II optimization illustrates that the lowest cost of energy with the highest contribution to renewable energy is realized for the first scenario. While, the diesel generators are compulsory for all scenarios to cover the load.

Optimized HRESs that exhibit maximum reliability and minimum energy costs are recommended. Perhentian Island in Malaysia was used as a practical case study. The NSGA-II method has been applied to solve the multi-objective optimization problem in order to simultaneously minimize two objectives: LLP and COE. This approach is recommended for optimizing the size of HRESs, which consists of solar PV, BES and DG subsystems. The DG is used as a backup source when solar PV and BES fail to meet the load demand. Eight case studies were taken into account to improve the system with four decision variables in the optimization process. Those variables were the number of solar PV, number of BES, number of DG, and percentage value of DOD. The optimization results showed that the optimum configuration of PV/BES/DG has an optimal DOD value of 79%, with LLP = 0 % and COE = 2.3416 RM/kWh. Thus, the results show that the hybrid system is capable of providing uninterrupted electrical energy to the isolated area with high renewable energy sources and low operation rate of diesel generators.

This article was edited by Gabriel Ordonez.

Vigna K. Ramachandaramurthy (SM‘12) received his Ph.D. degree in Electrical Engineering from the University of Manchester Institute of Science and Technology (UMIST) in 2001. He is presently a Professor in the Institute of Power Engineering, UNITEN. In 2008, he received the IET Mike Sargeant Awad for career achievement. In 2009, he received the Institution of Engineers Malaysia (IEM) Young Engineers Award. Prof Vigna has served as the IET Malaysia Chairman, IET Council Member, Institution of Engineers Malaysia (IEM) Council Member, IET Younger Member Board representing West Asia, International Professional Registration Advisor, Interviewer and Convenor for Chartered Engineering (UK) in Malaysia. Prof Vigna is also a Chartered Engineer registered with the Engineering Council of UK and a Professional Engineer registered with the Board of Engineers Malaysia. To date, he has successfully supervised and graduated more than 100 postgraduate students, with many receiving distinctions. His area of interest includes power systems related studies, renewable energy, energy storage, power quality, electric vehicle and rural electrification. Prof Vigna is the principal consultant for Malaysia‘s biggest electrical utility, Tenaga Nasional Berhad.

Ahmed Altaher (S’14 M’20) was born in Tripoli, Libya. He received his Diploma from College of Electronic Technology (CET), Tripoli, Libya, and his B.Sc. honors from University of Grenoble Alps (UGA), France, and his M.Sc. from Bordeaux University, France. He got his Ph.D. degree in electrical and electronic engineering at UGA in 2018 where he was with GIPSA-lab. From 2001 to 2010, he worked in industry as an engineer, in education as a teacher and an inspector and higher vocational education as an assistant lecturer. He is an adjunct lecturer with CET since 2013 and an entrepreneur and a research engineer with S2A2I-lab since 2019. He served as a coordinator for webinars of the IEEE Smart Grid Society and a member of its education committee. His research interests are dependability, safety and cybersecurity of networked systems, diagnostics of cyber-physical systems and industry applications of communication networks.