This storm was the third of its kind in the last five years in Toronto. In Toronto and elsewhere, more and more frequent severe weather events are impacting the electrical grid causing significant disruption. Hurricane Sandy, for example, left approximately 8.5 million people without power, while the Toronto Ice Storm and the flash flooding of 2013 cut power to approximately 250,000 and 300,000 customers, respectively. It is estimated that such ‘abnormal’ weather events cause close to 90 per cent of the major power outages. Hence, grid resilience needs to be part of what LDCs increasingly focus on in the future to deal with extreme weather phenomena and other threats (e.g. cyber security).

Traditionally, LDCs have relied on reliability measures to evaluate grid health. However, the rising probability of extreme events combined with the high dependence of modern society on electrical power (making it, thus, more vulnerable) describes an actual and very important concern of critical nature. Reliability falls short in helping the LDCs prepare for this new normal, where “beyond reliability” measures are required. New dimensions need to be considered, measured and applied.

Resilience is a term used to see how well a system performs under extreme stress and/or how long it takes for that system to recuperate. In electrical terms, we define a resilient grid as one that can withstand extreme stress by being prepared and having robust infrastructure, but also being able to restore power as rapidly and efficiently as possible via increased flexibility and the ability to quickly adapt and learn from past mistakes.

What Does Resiliency Mean for an LDC?

To be resilient, LDCs need to have:

After reviewing the literature on the topic of grid resilience to identify different factors impacting resilience and ways to measure and increase the resilience of electrical grids. In some of our recent works we propose that grid resiliency be studied from three vectors as described below:

Hard resilience is indicated from the system’s adoption of hardware that increases resilience, either through advanced technological upgrades, replacing old systems, or creating energy storage systems for back-ups and redundancies (N-1, N-2).

Resilience needs to incorporate customer independence. In times of extreme weather, it is often difficult for the LDC to respond to all customers at once. Increasing the ability of customers to weather such phenomena independently with minimum inconvenience and harm is an important step to increasing overall resiliency.

How Can LDCs Measure and Increase Grid Resiliency?

Approaches for improving the resilience and reliability of the grid include both high and low-tech solutions such as smart technologies, micro-grids, customer preparedness and demand management. However, no one can manage what can’t be measured. Therefore, we propose that LDCs use the following set of indicators to measure their system performance regarding resilience both pre and post extreme weather events. 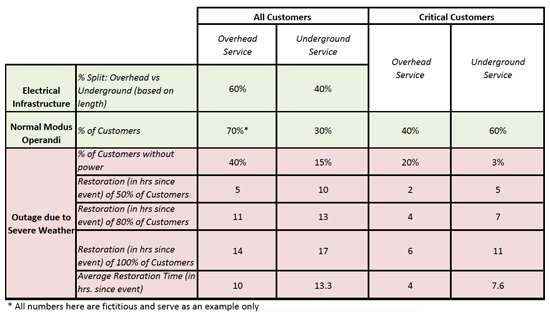 Increasing resilience for LDCs means being able to deal with extreme-events smarter, better and in a more efficient manner. For LDCs it needs to be approached from three vector perspective, those of hard resilience, smart resilience and customer resilience.

LDCs need to measure their pre-event resilience using critical indicators identified. Furthermore, conducting post-event investigation can be useful in identifying and disconnecting parts of the grid prone to high rates of failure. A post-event investigation will help in calculating the percentage of customers without power and the outage duration, the effectiveness and speed of restoration effort profile, as well as the average restoration time per underground serviced customer and the percentage of critical facilities (e.g. hospitals) without power, completed with outage duration. Measuring these numbers and actively improving on them will boost resilience for LDCs.

We propose that these or similar indicators be measured and benchmarked at the LDC level. This will help setting a series of standards and create best practices to improve grid resilience. Simultaneously, it is critical to compare these measures over time to track any signs of progresses made concerning these specific extreme weather-related outages, irrespective of the cause. New resilience indicators (or indices) and measures, along with constant improvements to LDCs necessary policy/regulatory changes at the planning level, and adoption of smart technologies along with public awareness and preparedness are vital for increasing grid resilience.

For a downloadable copy of the October 2018 eNewsletterwhich includes this article, please visit the IEEE Smart Grid Resource Center.

Pallavi Roy is a PhD candidate at Ryerson University, Toronto, Canada. She has been working in the power industry for the past 5 years in various roles dealing with policy, planning and power sector transformation.

Dr. Thierry Spiess is a Senior Policy Advisor at Natural Resources Canada. He is an experienced policy advisor with a demonstrated history of working on environment- and energy-related policies within the Government of Canada.

Dr. Bala Venkatesh is a Professor in the Department of Electrical and Computer Engineering and Academic Director of the Centre of Urban Energy at Ryerson University. Dr. Venkatesh is a Senior Member of the IEEE.