Effective training of future smart grid technicians and engineers requires modern tools that keep up with and anticipate the growing adaption of advanced IT and automation technologies in the field. New smart grid projects require multi-disciplinary teams composed of power systems engineers, automation engineers and software engineers to handle the growing complexity and interdependence of multiple subsystems and an integrated perspective on process logic, control aspects and technology interoperability. Development of suitable educational instruments is thus required that considers this paradigm shift in increasing levels of complexity and engages the students with the learning content while allowing the means for both hands-on laboratory experimentation and remote visualization and operation in an e-learning context.

We illustrate our recent experience in developing such instruments in the form of a process simulation equipment suitable for vendor agnostic PLC trainings with rich user interface and process model representation and realistic signal feedback and debugging. Starting point is the development of a simulation program that models various processes present in the smart grid and the mapping of I/O signals: discrete and continuous sensor measurements and control signals. Industry-standard physical signals: 24V for digital and 0-10V for analog inputs and outputs, are interfaced with a separate control unit where the students must implement the control logic according to the process description and expected behavior. This type of setup allows a clear association with the process by the students who can measure the signals and debug incorrect implementation or simulated faults. Simulation applications are developed using the C# programming languages and run on an embedded industrial PC through the Windows 10 IoT operating systems. Suitable communication drivers are integrated for the ModBus data acquisition boards (DAQ) that acquire and generate the required signals. The control logic implementation depends on the manufacturer of the hardware e.g. Step 7 TIA Portal, Codesys, FactoryTalk, and others. Figure 1 shows the conceptual design and the physical realization of the demonstrator controlled by a Siemens S7-1200 family PLC unit.

This development was carried out together with an industrial partner during the research and technology transfer project ASID – Advanced Process Control System for Intelligent Specialization in the Energy Field [2].

One reference basic application for control of energy processes is described which models the reactive power compensation of a large industrial consumer. The percentage of reactive current within the total current amount consumed by the machinery equipment of a company department depends on the number of devices in operation. For reactive power compensation and increased electricity transmission efficiency, a PLC system must be designed to connect groups of capacitors to the power network as required. Each time the button S1 is pressed, a capacitor group is added to the main network, and each time S2 is pressed, a group is removed. The connection is done via contactors Q1 to Q4. The user interface is shown in Figure 2. Other types of processes, relevant to the smart grid, can include electrical drive systems, digital power system protections (automatic reclosing / 3-phase automatic reclosing), and energy management systems at the grid and consumer levels. 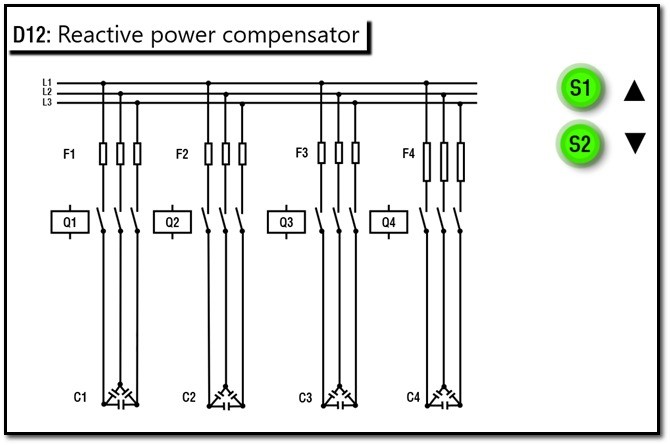 The process simulator can also serve as a practical solution for professional and life-long training programs either as a general-purpose training solution for automation or for domain-specific courses like smart grid automation, covering production, transmission, distribution and, demand-side applications. Through embedded webservers running on new generation PLCs, the process variables and program execution can be monitored remotely which in turn, increases the productivity of the training sessions.

In the context of the current push towards extended use of the remote learning solutions, we envision the virtualization of such set-ups in two alternative ways: 1) if the student has access to the physical automation device, the simulated process can be virtualized while providing real-time control feedback over the internet 2) if the student does not have access to the physical automation device, both the simulated device and programming and deployment of the simulated PLC run remotely with highlighting key aspects of the program execution.Regarding the implementation of such solutions, using a generic programming language for the development of the individual processes, the simulation software can be deployed in Linux-based sandboxed environments that run in the cloud. The control device can also be simulated using software products such as Siemens PLCSIM Advanced, while the physical signals can be embedded into new IoT publish/subscribe protocols such as MQTT which are supported by the newer generations of automation devices.

For a downloadable copy of the October 2020 eNewsletter which includes this article, please visit the IEEE Smart Grid Resource Center.

Grigore Stamatescu (M’07, SM’19) graduated from the University Politehnica of Bucharest (UPB) in 2009 and holds a Ph.D. degree (2012) from the same university. He is currently an Associate Professor (Habil. 2019) with the Department of Automation and Industrial Informatics, Faculty of Automatic Control and Computers, UPB. His research interests include networked embedded sensing, the internet of things, and distributed information processing in industry, the built environment, and smart city applications. Recent results include statistical learning methods for load forecasting and anomaly detection in building energy traces and data-driven modeling of large scale manufacturing systems, with a focus on energy efficiency. Research results have been published in over 100 articles. Dr. Stamatescu was a Fulbright Visiting Scholar 2015-2016 at the University of California, Merced, and a JESH Scholar of the Austrian Academy of Sciences in 2019. He currently serves as the IEEE Robotics and Automation Society (RAS) Romania Chapter Chair.

Iulia Stamatescu (M’09) is currently an Associate Professor with the Department of Automation and Industrial Informatics, Faculty of Automatic Control and Computers, University Politehnica of Bucharest, Bucharest, Romania. She obtained, in 2009, her BSc degree in Systems and Computer Engineering and in 2012 the title of Doctor of Philosophy (Ph.D.) in System Engineering. Her Ph.D. thesis covered the field of energy efficiency modeling and optimization for datacentres, being partially carried out within an international project at Grenoble Institute of Technology, Grenoble, France. Her research activity revolves around the management and optimization of energy systems and data modeling algorithms based on computational intelligence techniques. Current research interests span the areas of electric vehicles. She has been a member of IEEE Control Systems and IEEE Power and Energy Societies since 2009. As service to the broader scientific community, she is an active reviewer and committee member of several international conferences.

Nicoleta Arghira (M’09) is currently a Lecturer with the Department of Automation and Industrial Informatics at the University Politehnica of Bucharest, Romania. She received her BSc degree (2009) degree from the Power Engineering Faculty, and her Ph.D. (2012) degree in Systems Engineering from the Automatic Control and Computers Faculty at the same university. In 2019 she received the IEEE PES Romania Chapter Outstanding Engineer Award. Her research interests include control systems for industrial processes, automation for power systems, and, lately, data analysis. Currently, she focuses on demand dispatch/load management applications in energy distribution grids and microgrids.

Ioana Fagarasan (M’09) is a Professor at University “Politehnica” of Bucharest and had didactic and research experience within the Faculty of Automatic Control and Computers, Department of Automation and Industrial Informatics, since 1996. The scientific activity was supported by her participation in approx. 30 research and development projects, of which 9 were under her coordination, involving masters or doctoral students and young researchers in research and development teams. The obtained results were published in the international flow of publications, transferred to the economic environment, and finalized with a patent and a prototype for a simulator of practical control diagrams dedicated to educational platforms. She is the author of 20 books, numerous articles in journals, and conference papers. Her research interests include modeling and simulation, control system, diagnosis and detection of faults in power system, automation, and advanced systems architectures for critical complex systems (smart grid, smart city, and smart agriculture).