Effective load carrying capability (ELCC) is a metric to measure the capacity credit (i.e., a portion of the rated capacity which is guaranteed to be available should it be needed). of power plants. ELCC is regarded as a derating factor applied to the power plant’s maximum capacity which considers uncertain factors such as forced outage rate (FOR) of thermal units and variability of renewable energy units in determining the plant’s actual value to satisfy the power grid’s reliability requirements. For example, a coal-fired thermal generator with a relatively low FOR will have a high ELCC value, representing a large percentage of its nameplate capacity. Conversely, a thermal plant with a larger FOR would possess a smaller ELCC in power system reliability studies. The ELCC of wind power generators (which depends on the availability of wind) might range from 8% to 45%, which is much lower than those of conventional thermal generators. Also, the wind power generator’s ELCC is correlated with load profiles. If the correlation is high, the ELCC of wind power generators would also be high since the wind power generation is available when it is most needed. However, a low correlation with load profile corresponds to a low ELCC, representing a lower capacity credit when the wind power generation is mostly needed.

In China, large-scale wind farms are often separated geographically from load centers. In 2019, the national average wind power utilization was 2082 hours and the amount of wind curtailment was 16,900GWh. The large-scale wind power generation available in Northwestern China is transported to the Eastern load centers by high-voltage direct current (HVDC) power transmission lines, which signifies the regional disparity of wind power generation and load centers in China, as shown in Figure 1. Compared with AC transmission, HVDC transmission features lower active power losses, higher flexibility and reliability, and the capability of limiting short-circuit currents. However, one would have to consider the effects of FOR and losses of HVDC transmission lines are important considerations when calculating the ELCC of wind power generators. ELCC, which uses the variability of wind as a parameter, provides a more effective and accurate metric to guide future wind power capacity installations and facilitates the inclusion of variable wind power generation capacity in reliability studies. 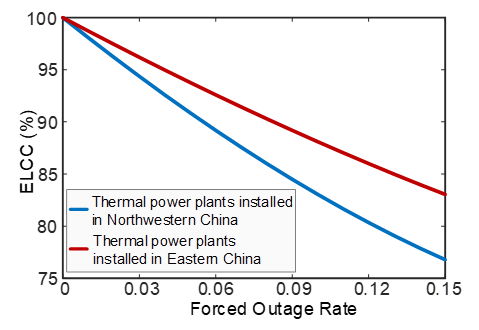 Figure 2: ELCC of thermal power generation installed in the Northwestern and Eastern Regions of China.

Mohammad Shahidehpourn (F’01) received an Honorary Doctorate degree in electrical engineering from the Polytechnic University of Bucharest, Romania. He is the Bodine Chair Professor and Director of the Robert W. Galvin Center for Electricity Innovation, Illinois Institute of Technology, Chicago, IL, USA. He is a Fellow of IEEE, the American Association for the Advancement of Science (AAAS), and the National Academy of Inventors (NAI). Dr. Shahidehpour is a member of the US National Academy of Engineering.

Quan Zhou (SM’19) received B.S. and M.S. degrees from the Department of Electrical Engineering, Shanghai Jiao Tong University, Shanghai, China, in 2011 and 2016, respectively. He received the Ph.D. degree from Illinois Institute of Technology, Chicago, IL, USA, in 2019. He is currently a Senior Research Associate in the Robert W. Galvin Center for Electricity Innovation at Illinois Institute of Technology. His research interests include microgrid operation and control, cyber-physical systems, 5G wireless communications, smart cities, and energy economics.