By Ernesto Alejandro A, Claudio Lima, and Elizabeth Escobar-Fernandes

The proposed approach evaluates applicability of transactive energy with the implementation of distributed ledger technology to provide an insight into the architecture available for residential energy transactions and evaluate the performance in terms of energy cost, energy efficiency, and environmental performance. The goal is to upgrade a typical power distribution network for a residential application on a ring bus topology and enable distributed transactive nodes to trade energy according to the end user’s preference in terms of cost, usage and environmental performance [1,3].

Almost every residential customer is monitored with a Utility meter for billing purposes, and most likely connected to a building management system with automatic controls for smart appliances, end user loads, renewable energy generation, EV charging stations, and smart thermostats. These distributed energy resources conform to a transactive node, but traditionally energy transactions occurred in the distributed management systems layer, managed by the distributed system operator DSO. This new model brings the transactive layer closer to the distributed energy resources, with each node represented by an agent with energy management functions, and in conjunction with a dynamic model of the local energy network, can accurately resolve transactions in real-time, identify optimization paths and adjust automatically according to user’s setpoints described in Blockchain in Transactive Energy [2].

Each agent has the ability to manage price, energy availability, and sources for each transaction with smart contracts as described in the Blockchain in Transactive Energy [1]. The elements of the transactive energy define the data objects for the smart contract architecture to be built, a common information model with a measurable functional requirements in terms of cost, processing power, and processing speed to achieve the desired outcome. Preliminary models being considered by the IEEE P2418.5 standard enable three 3 types of transactions, peer-to-peer, peer-to-DSO, and DSO-to-DSO. The article focuses on peer-to-peer residential applications and establishing the architecture to evaluate applicability, and benefits of DLT [3]. 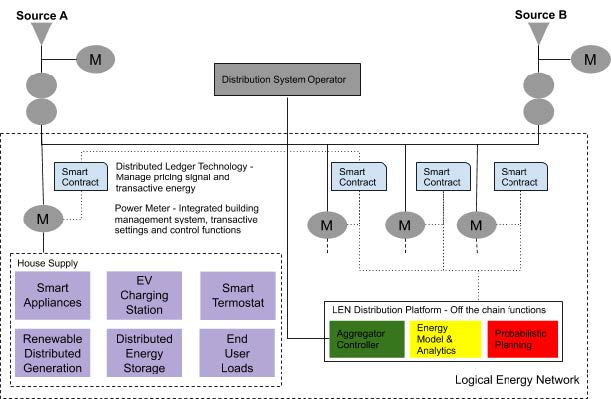 A summary of some of the challenges reported by utilities and regulators for the aforementioned applications are:

Energy Cost: Utilities and regulators set tariff based on predefined energy patterns of usage, peak demand values, and cost of generation and distribution. Switching to alternative affordable energy sources in real-time requires the ability to balance energy supply and demand, aggregate energy resources, and verify the performance of the available scenarios. These functions of the logical energy network reside outside the distribution system operator boundaries and interact with the smart contract and DSO in the transactive layer. Proof of concepts to establish regulatory frameworks that support energy savings is the main challenge facing Utilities today. [2]

Energy Usage: Exchanging energy between grid agents to optimize usage varies with availability of energy resources. Aggregating these resources and providing a transparent and reliable control philosophy for agents and system operators enables the integration of transactive nodes. A consensus mechanism for aggregators to manage energy resources with transparent and deterministic control functions mitigates liability and guarantees reliable operation of the system.

A summary of the performance measurements for the implementation of transactive energy to quantify the benefits for each technology.

Energy Cost: Energy cost includes peak shaving, energy shifting, and switching energy sources at the point of billing. DLT enables scripting dynamic actions to validate, verify, trigger, commit and record energy transactions according to a proposed workflow per application. This approach provides the benefits of a reliable workflow and a trust transparent model to establish a regulatory framework for a transactive layer closer to the distributed energy resources.

Once a device is reconnected to the distributed ledger network, the records of transactions that have been submitted to the blockchain network, including the energy transactions submitted by that device, can be downloaded to that device in the synchronization process. The intrinsic nature of the role-base, permission-base, immutable transaction prevents tampering of the data.

Ernesto Alejandro Arias was born in 1983. He received an electrical engineering degree from Universidad de Carabobo in 2006, a Diploma in Business Administration from University of Victoria in 2010, and specializes in energy management systems. He participates in the IEEE Smart Grid, Blockchain in Energy committee, and is interested in power systems, renewable system integration, energy storage and smart grids.

Claudio Lima is a seasoned technology executive and thought leader in advanced blockchain, IoT, and artificial intelligence (AI) technolo- gies, with expertise in energy (utilities, oil, and gas), smart city, and telecom/IT digital transformation. Previously, he was the Global Smart Grid CTO of Huawei Technologies in Europe-Asia- Pacific and a Distinguished Member of Technical Staff at Sprint Advanced Technology Labs in Silicon Valley, California. Dr. Lima is cofounder of the Blockchain Engineering Council (BEC) and leads the IEEE Blockchain Standards development as Chair and Vice Chair of the IoT and Energy Working Groups, respectively. He also serves as Blockchain Cybersecurity Industry Advisory board member of the US Department of Energy. Dr. Lima earned a PhD in electronic engineering at the University of Kent (UK). He can be reached at clima@blockchain-eng.org.

Elizabeth Escobar-Fernandes grew up in Colombia, South America. She graduated Suma Cum Laude from UNC Charlotte in 2014 with a Bachelor of Science degree in Computer Engineering. Elizabeth joined Duke Energy in January 2015 as an IT Engineer. Since January 2018, Elizabeth joined the Duke Energy Innovation team as an IT architect with concentration in Cybersecurity. Elizabeth is a Certified Blockchain Hyperledger developer, Certified Information Systems Security Professional (CISSP) and Certified Ethical Hacker (CEH). Elizabeth led the Emerging Digital team to develop the Duke Energy business use case for Blockchain and the Hyperledger Fabric Blockchain prototype for R&D. Currently, Elizabeth manages the Emerging Digital Products & Strategy team at Duke Energy, which encompasses the blockchain technology, Elizabeth participates in the IEEE smart grid and IEEE Blockchain in Energy working group. Elizabeth can be reached at elizabeth.escobar-fernandes@duke-energy.com.