Condition Monitoring for a Smarter Grid

There are various approaches regarding the meaning and added value of the Smart Grid concept. As a general definition, the digital technology that allows for two-way communication between the utility and its customers, as well as sensing throughout the transmission and distribution systems, is what makes the grid “smart”. This means mostly, at present, monitoring energy consumption and flow, actuating automatic rerouting when equipment fails or outages occur for quicker restoration of electricity after power disturbances, and improving integration of customer-owner power generation systems, including renewable energy systems. However, if the final objective is more efficient transmission and distribution of electricity and increased reliability, a fundamental contribution can be provided by implementing advanced techniques for diagnostic and condition monitoring of electrical apparatus, in order to achieve dynamic information on electrical apparatus health conditions and their optimum operation. Since, generally, the weakest points of the apparatus are the insulation sub-systems, detection of diagnostic properties able to evaluate their aging and failure probability is vital for reliable grid operation.

Electrical insulation diagnostic quantities can be grouped into two families:

Smartening the grid through on-line apparatus diagnostics cannot be obtained solely through off line measurements and observations. Such kind of reading are time consuming, involve long time steps between measurements, and often rely upon experts and/or the detailed assessment of various apparatuses from a data center. This approach is excessively time consuming, costly, and sometimes infeasible, due to the lack of expert availability. Hence, smartening the grid will require a solution based upon on-board devices developed for condition monitoring of the grid, able to provide the asset and maintenance managers with clear and timely information on the health of each grid component.

Advantages of grid smartening through condition monitoring can be summarized as:

Needed tools, on the other hand, would be:

It is noteworthy that diagnostic properties (markers) are generally correlated with apparatus operating point (e.g., voltage, active and reactive power) and thermal profiles, and that faults can propagate from one sub-system to another one, so that condition assessment can be enhanced having a global view of the entire apparatus. As an example, it is shown in literature, that one of the most important diagnostic quantities for electrical insulation, partial discharges, depends not only on voltage waveform but also on temperature and, thus, load. So, while smoothing overvoltages and compensating harmonics can reduce PD intensity and repetition rate, the same result may be achieved by decreasing temperature. Thus, operating a specific apparatus at reduced power, will ensure its reliability at some level, until maintenance actions can be taken.

Once diagnostic properties are measured as a function of time and knowing the effects of the mechanisms with which they are associated, a dynamic health index, DHI, can be calculated. A simple approach is to resort to an expression where score (magnitude) and weight (harmfulness) are summed for the various properties. Such an expression is then a number varying in the range 0-1, and it can be easily transferred to SCADA systems, trigger alerts e.g. in the form of a broadly understandable traffic light indication, i.e. red light when failure risk becomes unacceptable and maintenance is required in short times, yellow when attention must be triggered and other tests, also off line, may be required to ascertain the nature of HI degradation, green when the apparatus does not require attention. This approach can be supported by an extensive use of artificial intelligence tools.

It must also be acknowledged that this is a big data problem. The amount of data generated by a complex system can be daunting. A promising emerging solution is edge computing. In this approach, relatively inexpensive computing capability is located with each sensing system. The local computer does the initial data processing, e.g. determines the dynamic health index of the particular piece of apparatus it is monitoring in a system, and only sends information, not data, to the central controller. So, the concept and implementation of the dynamic health index are consistent with emerging technical practice in data-intensive applications such as a smart power grid. 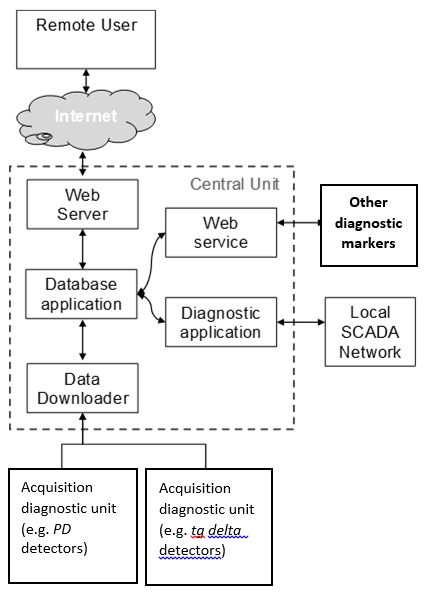 Fig. 1. Scheme of a condition monitoring system and interface with grid management.

To satisfy the above requirements, diagnostic systems must evolve from single-purpose systems to highly sophisticated data loggers, capable of storing signals from sensors providing the operating point of the apparatus as well as multiple diagnostic markers from various sub-systems, see Fig.1. The availability of large-band communication media and large data archiving services, as internet cloud storage and 5G, has solved potentially any bottleneck in the delivery of information to centralized SCADA systems.

Gian Carlo Montanari (M’87-SM’90-F’00) is currently associated to the Center for Electromechanics at the university of Texas at Austin. He has been Full Professor of Electrical Technology at the Department of Electrical, Electronic and Information Engineering of the University of Bologna, teaching courses on Technology, Reliability and Asset Management. He has worked since 1979 in the field of aging and endurance of insulating materials and systems, diagnostics of electrical systems, asset management and innovative electrical materials (magnetics, electrets, super-conductors, nanomaterials). He has been engaged also in the fields of power quality and energy market, power electronics, reliability and statistics of electrical systems, and smart grid. He has been recognized with several awards, including the IEEE Ziu-Yeda, Thomas W. Dakin, Whitehead, Eric Forster and IEC 1906 awards. He was founder and President of the spin-off Techimp, established in 1999. He is author or co-author of about 750 scientific papers.

Robert E. Hebner (Fellow IEEE) is the Director of the Center for Electromechanics at the University of Texas at Austin. Before joining the University of Texas, he had been the acting Director of the National Institute of Standards and Technology (NIST). He has served on a number of government review teams to assess the management of technical programs in other organizations. Throughout his career, Dr. Hebner has been active in technically having received a Ph.D. in physics and having authored or coauthored more than one hundred technical papers and reports. He is a past president of the Dielectrics and Electrical Insulation Society of the Institute of Electrical and Electronics Engineers. Dr. Hebner is a fellow of the Institute of Electrical and Electronics Engineers and a member of the American Physical Society and the American Association for the Advancement of Science. Awards he has received include the U.S. Department of Commerce Gold, Silver, and Bronze Medals and the 1990 Harry Diamond Memorial Award, given annually by the Institute of Electrical and Electronics Engineers, for outstanding technical contributions by a government employee.

Paolo Seri (M’17) was born in Macerata, Italy, on June, 4th 1986. He received the Master’s Degree in energy engineering in 2012 and PhD in electrical engineering in 2016, both from the University of Bologna. From 2017 he is part of the Laboratory of Innovation Technology (LIT) of the University of Bologna as a research fellow, currently working on the topics of HVDC cables design, partial discharge detection and modelling, and characterization of dielectric materials. He is also Assistant Professor at the Department of Electrical, Electronic and Information Engineering, DEI, of Bologna University.