Conventional grids have relied chiefly on synchronous machines to carry out the crucial task of forming the grid, which includes, but is not limited to, black starting the grid, maintaining the grid voltage and frequency, power sharing, and fault ride-through and recovery. The operating nature and configuration of a synchronous machine provides such features. This further enables complex power electronic equipment, such as HVDC and FACTS devices, to lock onto the grid voltage as grid-following devices and carry out their defined tasks. Grid-following devices rely on a stiff grid with minimal voltage and frequency variations (see Figure 1). 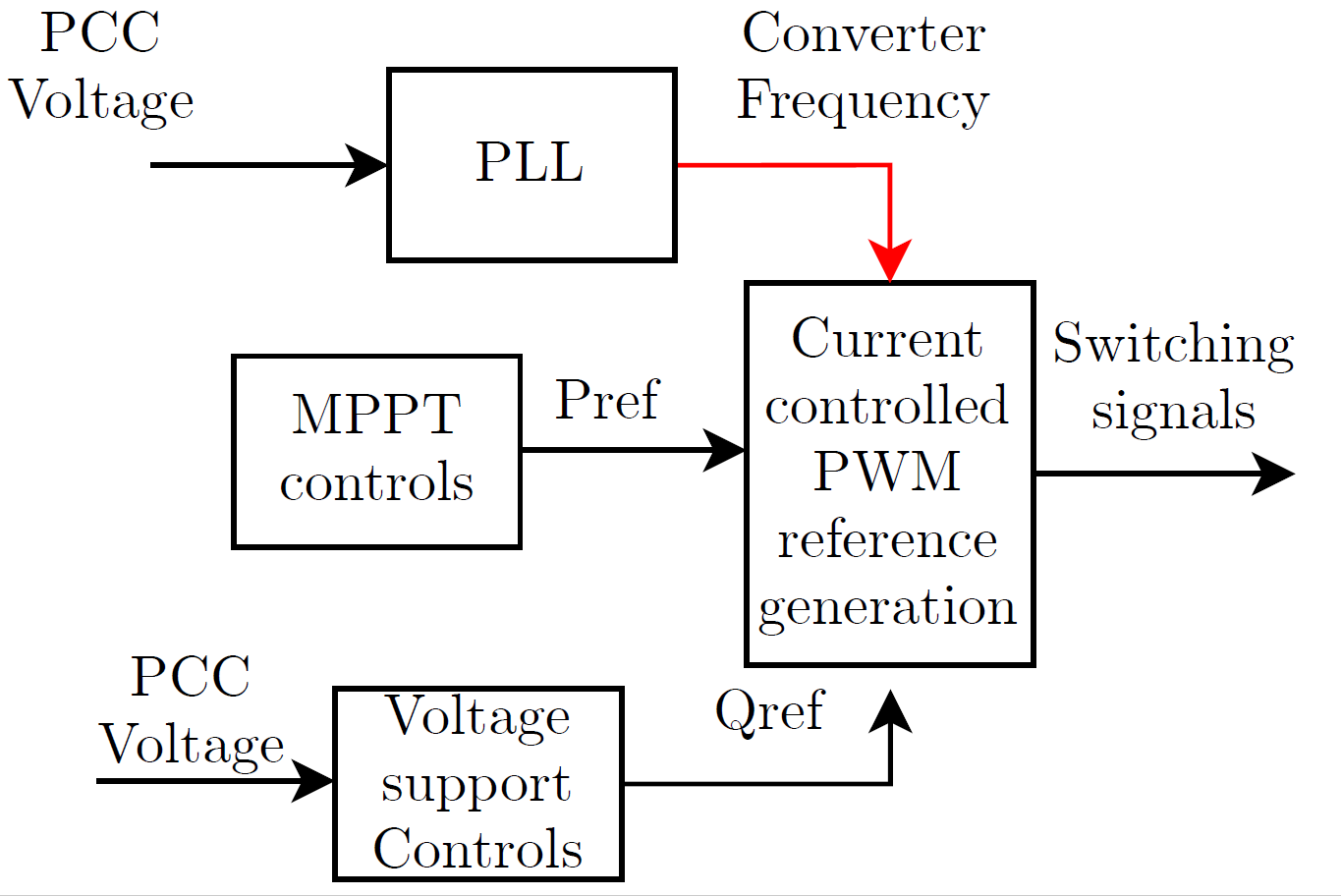 The introduction of renewable energy sources has resulted in converter-tied generation, which has in turn diluted the share of synchronous-machine-based generation. While these converter-tied resources provide energy to the grid, their control schemes have largely relied on following the grid, with little or no explicit grid-forming provisions.

One of the key properties of a synchronous machine is its mechanical rotational inertia - a  limited, yet highly effective, means of energy storage. Thanks to this locally available energy storage, a synchronous machine can conduct energy transactions with the grid in the early stages of power mismatch events and before higher-level controls respond. This natural response reduces frequency deviations and helps to maintain the system stability. On the contrary, generation based upon grid-following converters does not possess this property. With the share of synchronous machines on the decline, the total inertia in modern grids will decrease leading to large and far-reaching frequency deviations that will threaten the stability of large power systems. It is thus necessary that converter-tied generation is augmented with grid-forming capabilities as well.

While converters are steadily added to the grid, it is natural that they have to co-exist with conventional forms of generation in the grid for the foreseeable future. One method to address declining inertia is to implement specialized control algorithms in grid-following converters known as Fast Frequency Response (FFR). These algorithms act upon the rate of change of frequency after an event, and inject active power to the grid in order to support existing synchronous machines to reduce the frequency nadir (see Figure 2(a)). The modifications required to existing converter controllers are relatively simple as the converters continue to function primarily as grid-following with an additional control loop to implement FFR functions. This approach requires accurate detection of the event, and due to its measure-detect-inject approach, its response is relatively slow. Since bona-fide grid-forming converters (see Figure 2(b)) are still at their infancy, FFR provisions exist as a bridging approach during the transition from grid-following to grid-forming.

Real-world implementations of grid-forming converters are rare in bulk power systems. A widely discussed control approach for grid-forming converters is to emulate the behavior of a synchronous machine and its controls, effectively creating a Virtual Synchronous Machine (VSM). A key consideration in VSM-type converter control is that converters do not possess the (mechanical) energy storage of conventional synchronous generators. This has led to the development of methods for rapid energy transactions with the ac- or dc-side networks of the converter. Alternatively, grid-forming converters may be equipped with fast energy storage devices such as batteries, ultra-capacitors, or flywheels for local, readily accessible energy. This can be implemented in many forms including conventional two-level topologies, or modified versions of modular multilevel converters.

Although grid-forming converters with embedded energy storage can emulate the operation of a synchronous machine with the added flexibility offered by parameter tuning possibilities, several inherent challenges limit their applicability. These stem from the radically lower over-current capability of power semiconductors used in the construction of converter than that of a large synchronous generator, which puts caps on the extent these converters can partake in major frequency events. This also challenges the synchronization algorithms of grid-forming converters. While grid-following converters rely on the voltage of a relatively stiff grid for synchronization, grid-forming converters have to rely on their own power output. Consequently, conventional saturation-based current limiting methods may result in instabilities when used in grid forming. New approaches, such as virtual impedance-based current limiting, are introduced to help grid-forming converters to ride through faults. These methods, however, require detailed tuning and extensive studies before they can be reliably used in practical implementations.

The landscape of generation in many utilities is shifting towards significant or sole adoption of converter-tied renewables. Grid-forming requirements of such grids are expected to differ from those of a synchronous-machine-dominated grid. Static converters generally respond faster than mechanical machines and the difference between the response time-scales of these two systems can have negative impacts on the stability of the grid and needs to be studied carefully. The vast majority of renewable sources exist as aggregated units (e.g., solar or wind power plants), and are often distributed. This is different from a centralized architecture where grid-forming was done though a small number of units with larger capacity. Additionally, converter-tied generation is significantly more dependent on the grid and the measurements thereof. These two features imply that implementing grid-forming controls in multiple aggregated units poses a number of control challenges, which may include interactions among closely positioned converters. Resolving such issues may require coordinated and centralized voltage and frequency control that relies on communication.

It is clear that the development of advanced converter systems  provides great advantages in terms of speed, flexibility, and modularity, which are well utilized in grid-following applications. The transition to grid-forming will pose new challenges that require not only better control methods, but also likely alternative converter topologies to incorporate energy storage units and their controls.

Paranagamage Shirosh Ayeshmantha Peiris was born in Panadrura, Sri Lanka. He received the BSc (Hons) degree in Electrical Engineering from the University of Moratuwa, Sri Lanka, in 2009, and the MSc degree in Electrical Engineering from the same university in 2018. He has been working as an Electrical Engineer at Ceylon Electricity Board, Sri Lanka since 2010, specializing in condition based monitoring on power transformers and generators. He is currently pursuing the Ph.D. degree in electrical and computer engineering at the University of Manitoba, Canada.  He is a recipient of the MITACS Accelerate and MITACS Accelerate Fellowship awards in 2019 and 2020 and is a MITACS intern with Manitoba Hydro International. His research interests are on Grid forming techniques using converter-based generation, Modelling techniques for Converter based Power systems, and Energy storage applications in low inertia grids.

Shaahin Filizadeh (S’02–M’05–SM’10) received the B.Sc. and M.Sc. degrees in electrical engineering from Sharif University of Technology, Tehran, Iran, in 1996 and 1998, respectively, and the Ph.D. degree from the University of Manitoba, Winnipeg, MB, Canada, in 2004. He is currently a Professor with the Department of Electrical and Computer Engineering, University of Manitoba. His research interests include electromagnetic transient simulation and power electronics. Dr. Filizadeh is a Registered Professional Engineer in the Province of Manitoba. He is active in several IEEE committees and is currently the Chair of the IEEE Task Force on Dynamic Phasor Modeling Techniques. He is an Editor of the IEEE TRANSACTIONS ON ENERGY CONVERSION and IEEE POWER ENGINEERING LETTERS, and an Associate Editor for the IEEE SYSTEMS JOURNAL.