The Snohomish Public Utility District's (SnoPUD) Arlington Microgrid project includes a Vehicle-to-Grid (V2G) demonstration. This article summarizes the Arlington project and motivations to demonstrate V2G. The article compares key aspects of the project's V2G technical specifications versus V2G-related standards available or being developed by the Institute of Electrical and Electronics Engineers and the Society of Automotive Engineers. This project's early V2G deployment and demo will inform future efforts to define and specify technical capabilities for V2G products and projects. The use of industry published standards, as they become available, will reduce the need for custom case-by-case engineering and thus lower barriers to implementing and using V2G-capable products and projects in microgrids and 'smart' grids in general.

Snohomish County PUD (SnoPUD) has recently commissioned the Arlington Microgrid (AMG). This project employs state-of-the-art technology to demonstrate the multiple uses of energy storage (ES), renewable energy integration, and electric vehicle (EV) integration. When connected to the grid, the system will send power generated by the 500-kilowatt solar array on site to SnoPUD customers. When the microgrid is “islanded” and independent from the grid, AMG will demonstrate resiliency by providing electricity to critical SnoPUD facilities, in the event of a storm or natural disaster.

These are the major the components of AMG: 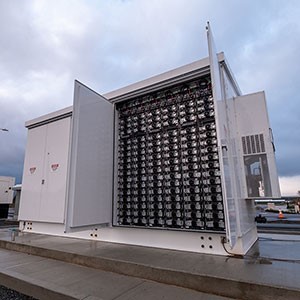 The 1 MW/1.4 MWh Li-ion BESS is powered by the on-site solar array. 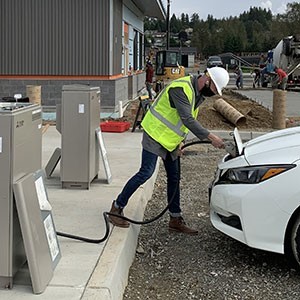 These two V2G chargers along with compatible EV’s allow SnoPUD vehicles to not only receive a charge, but flow power back to the grid. 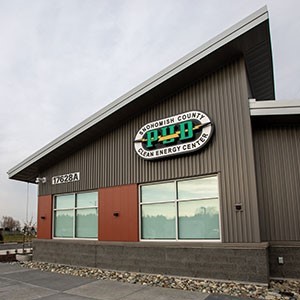 This multi-use facility will use interactive exhibits and displays focused on renewable energy, battery storage and energy efficiency. 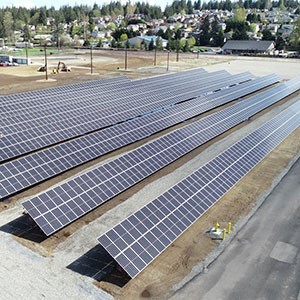 To help fund the project, SnoPUD was granted $3.5 million from the Washington State Clean Energy Fund, covering a portion of project costs. Additional analytic support was provided technical staff from the Pacific Northwest National Laboratory (PNNL) located in Richland WA. PNNL’s analytic support was focused on the V2G portion of the microgrid’s scope. One topic investigated by PNNL staff was the potential to use technical standards in place of the extensive custom engineering required at major project phases of AMG’s V2G system.

At the time of AMG project’s award, V2G technology was very new to the industry. Thus, most of the technical requirements for AMG’s V2G demo could not reference published standards. However, since that time IEEE and other Standards Development Organizations (SDO’s) have made advances in developing standards that include content specific to V2G, or are relevant to V2G.

The rest of this article compares the specifications of the AMG’s V2G scope to existing standards, discusses a coordinated effort across power and automotive industry SDO’s, and then highlights the importance of establishing Codes & Standards (C&S) to reduce the cost and complexity of adopting advanced and emerging technologies like V2G.

For relatively mature technologies like Arlington’s BESS and PV, the power industry has established practices that apply standards to help assure projects deliver minimum acceptable performance, reliability, and safety. However, V2G technology is not yet at a mature stage of industry adoption and use; thus, there are not yet adopted industry standards to support early V2G projects. To help fill this gap, SnoPUD’s AMG project provides a useful reference point. PNNL staff reviewed SnoPUD’s procurement specification vs standards. The result of the review is Table 1 mapping V2G equipment performance requirements versus potentially applicable standards.

While none of the cited standards in the table are specific to V2G, it is useful to note that many existing and established standards as listed above can be applied to V2G products and projects now. Thus, in the interim, while best practices are being identified and documented for future standardization of V2G equipment and application, there are existing general standards that can be applied to improve the efficiency and success of V2G projects. One active example of leveraging existing grid IEEE standards for V2G is SAE’s work to coordinate their industry’s V2G-related standards with relevant IEEE standards for both onboard and outboard charging equipment. This will be discussed next.

SDO’s that develop standards for the electric power system (EPS) and automobile need have begun efforts to coordinate standards development. For example, the IEEE develops standards for the EPS and SAE that develops standards are coordinating in their various working groups so that standards pertaining to V2G are harmonized. This coordination will also support organizations such as Underwriters’ Laboratory (UL) to develop testing and certification tools that allow V2G products to be tested and listed.

Three light- and medium-duty EV charging connectors/couplers standards exist in North America: The Tesla connector (exclusively for Tesla vehicles), CHAdeMO, and combined charging system (CCS). There are also other EV charging standards for transportation buses and medium/heavy-duty trucks not discussed in this article.

The CCS charge coupler is defined by the SAE J1772 Standard that specifies general requirements for conductive charging of EVs in North America. The electrical ratings for the SAE J1772 are shown in Table 2.

This standard includes communication between the EV and EV supply equipment (EVSE, e.g. charging station) required for the onboard inverter function to be configured and authorized by the EVSE for discharging at a site. The SAE recommends IEEE 2030.5 as a communications protocol.

In 2021, SAE J3072 [7] was updated to include the requirements that an EV with bidirectional onboard inverter must meet in IEEE 1547-2018. With this recent update of SAE J3072, an EV with an onboard bidirectional inverter and a bidirectional charging station can comply to IEEE 1547-2018, and could be compliant to IEEE interconnection standards while performing V2G operation. See Figure 5 for a simplified illustration.

Gaps in C&S development can lead to a variety of impacts:

On the other side, C&S with requirements having consensus from stakeholders can:

In addition, C&S are developed to address unclear or conflicting requirements.

Early demonstration projects including SnoPUD’s Arlington microgrid project will inform development of C&S that will in turn support streamlining of future planning, design, deployment, and operation of V2G technology and projects within smart grids and smart cities.

The technical work discussed in this article was supported by funding from the Department of Energy, Office of Electricity, Energy Storage Program.

Selected references with particular relevance to design and implementation of V2G are listed below.

This article was edited by Jorge Luis Angarita.

To view all articles in this issue, please go to May 2022 eBulletin. For a downloadable copy, please visit the IEEE Smart Grid Resource Center.

Charlie Vartanian is a Technical Advisor at the Pacific Northwest National Laboratory where he focuses on integration of energy storage with power systems. Charlie has 25 years of industry experience deploying advanced grid technologies, performing system studies, and contributing to standards development. Prior employers include Mitsubishi Electric, the California Energy Commission, and Southern California Edison. During his 15 years at SCE, his activities ranged from T&D planning through grid R&D.

Scott Gibson is the Energy Storage Program Manager at Snohomish County PUD.  He is a Professional Engineer and a 1987 graduate from the University of Wyoming where he received a BSEE.  After graduation, Scott worked for Boeing and then with a consulting company designing building electrical systems. In 2000, Scott joined the PUD and is now working on new electrical generation projects. Scott worked on the development of a tidal generation project, and helped to design and construct two “run of the river” hydroelectric projects. He is now the project manager for the PUD’s latest energy storage project - The Arlington Microgrid.

Siddharth Sridhar joined Pacific Northwest National Laboratory (PNNL) in 2014. His primary research areas include cyber and cyber-physical security for smart grid & buildings. In addition, he has interest and background in the areas of distribution system operation. He is currently leading R&D analytics for utility-client projects that are focused on the interplay between electrification of transportation and power systems. He received his Ph.D. in Computer Engineering from Iowa State University, where his thesis was on building attack-resilient Automatic Generation Control for the bulk power system.

Haukur (Hawk) Asgeirsson is the former Manager of Power Systems Technologies at Detroit Edison. In that position he was responsible for employing Distributed Resources into the T&D planning and operating process. While at Detroit Edison, Hawk championed smart grid technology solutions, resulting in numerous deployed smart grid projects.  Currently, Hawk consults to PNNL on the topic of Interconnection, and represents PNNL in various IEEE and SAE working groups.

Ryan Franks’s career has focused on the testing, inspection, and certification of batteries and energy storage systems, as well as the development of codes and standards. Prior to joining PNNL, he has held the positions of Business Director at Energy Safety Response Group, Global Energy Storage Business Manager at CSA Group, and Senior Program Manager at NEMA, the National Electrical Manufacturer’s Association.  Ryan holds a BS in Engineering Mechanics from the University of Illinois Urbana-Champaign and an MBA from John Carroll University.  He is a Senior Member of IEEE and the inventor of two patents.