Brief Understanding of Inertia in the Smart Grid, Its Challenges and Solutions

Few challenges are ever present with the power grid. While covering a vast area, the grid transfers the electricity at a certain frequency. An important aspect of this is the inertia of the grid. Inertia, in the simplest terms, is the resistance to change.  When looking at inertia from the aspect of the grid and electricity, the inertia is related to the kinetic energy present in the grid. Where does this kinetic energy come from? The production of electricity at the power plants involves rotating generators and motors. The mass of these machines produces the inertia while rotating at the same or close to the same frequency as that of the electricity grid. In other words, the stored energy in the rotating generators gives them the tendency to remain rotating and this is the grid inertia.

Why is it necessary to the grid? The electricity network is impacted by two major functions – consumption and production at any given instant of time. Since the network is AC, the balance between the production and consumption of electricity is indicated by the fluctuations in the frequency of the alternating signal. When either the production or the consumption experiences a change, then the frequency experiences a consequent change. However, the inertia slows this variation. The differences between consumption and production, if present, decreases with the presence of greater inertia in the system. This is particularly significant when a situation such as a failed power generator arises. In this case, the inertia (stored energy) provides a temporary response for a short period of time (typically seconds) by making up the power lost from the failed generator. This time duration allows the detection of the failure and possibility to respond to the failure.

Firstly, it is important to understand how the change in frequency (or change in consumption/production) occurs? On the production side, it may be due to a fault in the system. On the consumption end, when a number of devices that require significant energy (such as air conditioning and/or heating etc.) are turned on at the same time, then the frequency experiences a drop. System operators in the production case, work to find and fix the fault. In the second case, they work to balance the frequency and in some cases, as mentioned previously, this results in the electrical disconnection of that area from the grid to avoid damage to the equipment (this is also called as load shedding!). If this is not done, the frequency variation may go beyond control and then a significant portion of the system would have to shut down, resulting in the remainder system picking up extra load and adding a consequent stress on the network. If this is not addressed appropriately and in a timely manner, it may result in cascading outages.

In the conventional grid, consisting of power from fossil fuel, nuclear or hydropower generators, the inertia is greatly available and the consequences of its reduction, was not a factor in the planning.  With the evolution of power generation, inverter-based resources such as renewable power and battery storage are now connected to the grid. However, these systems do not provide any inertia as both wind and solar energy are connected to the grid without a direct rotating mass, which is needed for the inertia. With conventional power plants, the rotating mass is connected directly to the grid and rotates at the same frequency.

So what happens when the inertia decreases? As a basic rule, if the inertia is low, then the sudden changes that are experienced by the signal frequency are more significant, i.e. there may be larger difference or the change may be more rapid. This makes it more challenging to maintain the variation of the signal frequency in the normal range. As mentioned before, this results in power cut over a large area, which is generally avoided during disturbances as in fault conditions. Although, the wind turbine contains a rotor, it is not the same as that of a rotation mass connected directly to the grid. There is usually a frequency converter between the turbine and the grid. Therefore, in the case where there is a frequency change, the rotating mass’s kinetic energy, i.e. from the wind turbine, is not transferred directly to the grid, which means that it is not able to provide aid during faults. 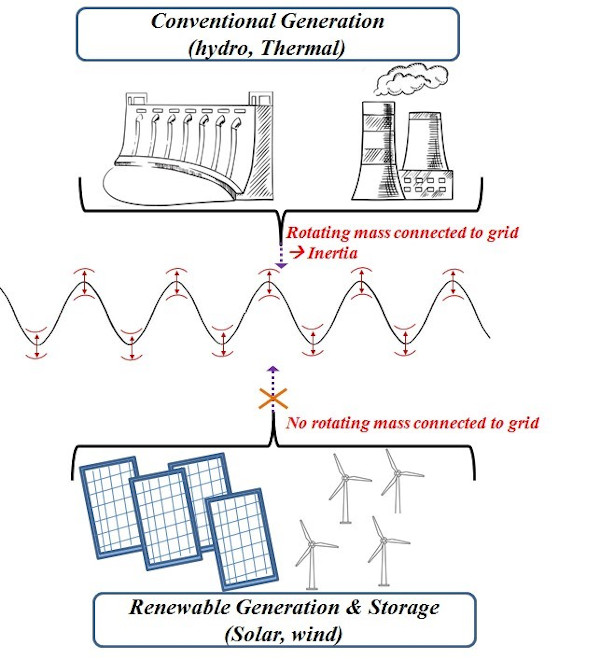 With the continual increase of the integration of renewable source which is reflected by many countries, such as India, that are planning on harvesting the abundantly available renewable resources, the reduced grid inertia is going to be a continual problem and raises the issue of management in the grid which also contains conventional generation. There are number of methods to mitigate grid inertia challenges. In case of frequency changes with low inertia, the range over which the frequency varies, may be controlled. In practicality, this means that reducing the production power. Another option is to bring the reserve power into play. Although it is currently in the system, the need is for it to mimic the role of the grid inertia, implying that it needs to be fast activated. Another probable solution to this problem lies in prediction and analysis of the consumption side. Since significant change in the consumption is a major cause of losing grid inertia, if it may be predicted as to when a large load is about to be added to the grid, then such a problem may be mitigated. This however, requires the use of data analytics techniques that may be applied on user consumption data.

Artificial Intelligence or AI is intelligent techniques to build smart machines that work at maximizing the chance of achieving a particular set of goals. There are several aspects of AI such as Fuzzy Inference Systems, Pattern Recognition, Machine Learning, and Artificial Neural Networks that may be used individually or as a combination to achieve whichever goal has been set. Machine Learning (ML) techniques automatically learn from the data (existing historical data) and improve the performance and predictions based on past experiences (previous outputs). When applied to power consumption data that exists, ML techniques may be used to develop mathematical and logic models such that the times of greater consumption, and therefore, possible times of grid inertia imbalance may be predicted. With such a prediction, not only would it be easier to manage frequency variations, but also predict the level of integration of renewable sources.

For a downloadable copy of the November 2020 eNewsletter which includes this article, please visit the IEEE Smart Grid Resource Center.

Rajesh Kumar (M’08–SM’10) received the B.Tech. (Hons.) degree in Electrical Enginnering from the National Institute of Technology (NIT), Kurukshetra, India, in 1994, the M.E. (Hons.) degree in power systems from the Malaviya National Institute of Technology (MNIT) Jaipur, Rajasthan, India, in 1997, and the Ph.D. degree in intelligent systems from the University of Rajasthan, Rajasthan, India, in 2005.Since 1995, he has been a Faculty Member with the Department of ElectricalEngineering, MNIT Jaipur, where he is currently associated as a Professor. He was a Postdoctoral Research Fellow with the Department of Electrical and Computer Engineering, National University of Singapore (NUS), Singapore, from 2009 to 2011. His research interests include theory and practice of intelligent systems, computational intelligence and analytics, electric transportation, smart grid and robotics.

Bijaya Ketan Panigrahi (SM’06) received the Ph.D. degree in power systems from Sambalpur University, Sambalpur, Odisha, India, in 2004. He was a Lecturer with the University College of Engineering, Burla, Sambalpur, Odisha, for 12 years starting from June 1992 to March 2005. Since 2005, he was working as a faculty in the Department of Electrical Engineering, IIT Delhi, New Delhi, India, where he became a Professor in 2017. Presently he is also working as the Head of Centre for Automotive Research and Tribology (CART), IIT Delhi. His research interests include intelligent algorithm and its application to power system operation, control, protection and management. He also works in Electric Vehicle Charging Infrastructure, Battery Management System, Smart Grid, Cyber security of critical infrastructure, power quality assessment etc.