In the near future, Electric Vehicle (EV) will complement the power generation by generating an extra power generation to the electrical grid when it is needed. As known, the EV is driven from electric source that has been stored in EV battery and it can be discharged to the charging station when the grid needs extra power for quick power restoration during a fault. Therefore, the Vehicle to Grid (V2G) concept should be in place with the electric grid operation for solving this fault conditions in order to avoid instability on the grid.

When looked at from a smaller picture, the connection of EV charging stations with other nonlinear loads at point of common coupling (PCC) will create unstable conditions to the grid voltage and frequency if without implementation of a robust power sharing strategy controller. It is because it deviates from the grid parameters such as voltage, frequency, etc. from its rated values due to different power ratings of the EV battery during V2G. Therefore, grid stability is an issue to be discussed and solved. As is known, each EV station module has two power converters which are a dc converter and an inverter. Nevertheless, the number of control strategies should also be increased with the numbers of the converters. For example, when thousands of these stations are being used (to transfer the energy) in V2G mode, it will cause a grid problem and lose the sharing among the EV charging stations, if each station is not able to create an equal/balanced power sharing transfer. Therefore, the electric grid will see these stations as nonlinear sources or power absorbers that can jeopardize the stability and will interrupt the efficiency of the entire network. Even worse can happen, according to IEEE Std. 1159, when the voltage at PCC drops to minimum rated sy 0.8p.u for about 20 cycles, it will lead to shut down of the entire grid if no restoration or compensation mechanism  is taken. Meanwhile, if there is significant drop of the frequency for about 2.5% from the rated frequency for about 5 cycles, it also will create frequency swing that will increase the power losses at the distribution grid, create inertia generator losses and effect the energy production along the PCC network due to this sensitive loads miss operation. Due to these problems, station management control is required with a new controller that works faster in order to restore back the voltage and frequency for grid stability and also able to balance the EV battery at the rated value even though different storage power supplies have been generated during V2G. At the same time, the need to use only one power converter which is the rectifier as the interface between the battery and PCC is becoming a concern. Therefore, a single robust control which combines with the state of charge (SOC) of the battery for direct power control and voltage compensation for the rectifier that will benefit the grid and to maintain the power sharing among the batteries. The idea is to implement the Virtual Synchronous Motor (VSM) formulation control for rectifiers with SOC parameters condition input. It is where the VSM system is represented in the rotational motor concept. It will also add the SOC parameters' condition with respect to the virtual inertia (Hv) for the active power-frequency control loop as shown in Figure 1 for extra battery management configuration. Therefore, the virtual inertia motor will help to manipulate the power sharing of each EV battery output by improving the virtual power source generation to the PCC for balance and to compensate for the stability of the system. The virtual inertia is also automatically adjusted to a predefined value that disallows rapid saturation of the EV battery. To ensure that the EV battery is available for the grid stability improvement the VSM provides a voltage stability at the PCC while at the same the SOC will be maintained. However, if the SOC is less than 50%, this battery should be disconnected from the grid and then change to charging mode operation to charge the EV battery. At the same time, the VSM controller also uses a torque output formulation to generate the power which flows from the rectifier and behaves as a voltage source control for the rectifier.  If the Hv  fluctuates faster, with the rate of frequency change, a smaller error frequency is able to compensate for the frequency stability at PCC for equal synchronization before the power can be transferred. 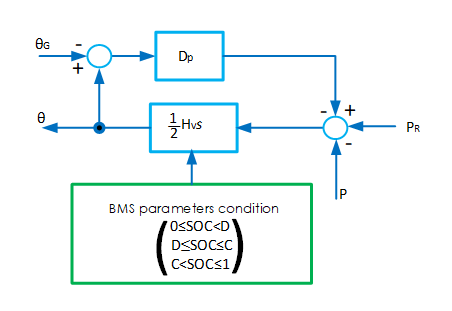 In the end, this VSM concept is able to maintain the electric grid at the PCC by injecting the compensation voltage, current and maintaining the frequency during the fault.  This controller is also able to balance and share equally the power among the EVs battery sources that have been transferred to the electric grid as a new Distributed Generation source for the future.

This article was edited by Jenny Zhou.