This article discusses how to determine the ‎optimum size of stand-alone Hybrid Renewable Energy systems (HRESs) to meet the load requirements of a certain set of customers at minimum cost and ‎highest reliability. Due to the complexity of the problem, artificial intelligence methods are considered. The complexity arises from aiming to design the HRES as a combination of the following components: solar PV, battery ‎energy storage (BES) and diesel generator (DG). For the lead-acid ‎battery, the Depth of its Discharge (DOD) is duly considered since it affects the long-term economics of the overall design. The optimal HRES planning is then defined as a multi-objective optimization problem ‎ to minimize the Loss of Load Probability (LLP) and Cost of Energy (COE). ‎Perhentian, a Malaysian island, is used as a case study, in which eight different ‎scenarios were studied to determine the best configuration. Techno-economic optimization strategies with system configuration are designed to ‎meet the load demand.

The Perhentian Islands are around 21 km off the east coast state of Terengganu, Malaysia. One is called Perhentian Besar and the other is called Perhentian Kecil, as shown in Fig. 1. Buildings on the Islands are resorts with only one fisherman hamlet where the locals can live. They have a population of more than 2000. The extension of the grid will be therefore costly at a low rate of return and value. Thus, a standalone hybrid system may serve as the resource of these communities [1]. Many resorts still depend on diesel generators while the hybrid wind-solar system was installed by Tenaga Nasional Berhad (TNB) to serve the residential areas [2]. The population is expected to grow gradually and it is anticipated that this growth will increase electricity demand in the coming years [3].

The HRESs were chosen as the best combination to fulfill the 24 hours electricity supply without interruption based on the Malaysian weather condition. Using realistic load profiles, solar irradiation, wind speeds, and artificial intelligence methods, the sizing of the hybrid system components can be calculated in a way to ensure that the system capacity is utilized efficiently without oversizing it [4]. The load demand amounts to 4.8 MW, particularly of types relevant to touristic activities as around the local resorts and hotels. TNB has installed small scale wind turbines and solar PV which have not been sufficient to cover said demand. Since the diesel fuel price may be highly volatile and the cost of transporting it can further increase electricity costs [5], a hybrid system becomes imperative. Two specific objectives are targeted by designing and implementing such a system:

The combination of hybrid PV/BES and DG system limits the fluctuation issues in the PV systems and decreases the utilization of DGs. The integration can also establish techno-economical energy sources that are based on the comparison of capital cost, operation and maintenance costs as well as generator fuel cost [6-8]. The solar PV is the primary source, the BES is the backup energy source and the DG operates only in times when the former resources cannot respond to the load demand [9]. Different models are proposed to represent every single source of the PV/BES and DG hybrid system. 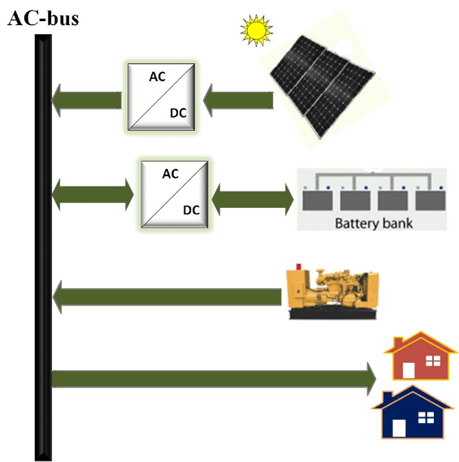 Figure ‎2 shows the hybrid system that will supply the local load demand in Perhentian Island. The system will be modelled based on the sizing that the optimization tool determined. The proposed system was tested for 8,760 hours using appropriate simulation software. The hourly solar PV and temperature data in this case study is shown in Figures ‎3 and‎ 4 respectively.

The peak load demand is 2442 kW (Fig. 5). The solar PV and battery models are used in this case study to meet the peak load demand. DG is utilized in this system as a backup source. Wind turbine was omitted due to the low wind speed. When the output power from the PV panel and the battery bank cannot satisfy the load demand, the DG starts to operate. Hence, the power rating of the DG shall be equivalent to the peak load demand in the daily load curve. The relevant cost data is provided by TNB Distribution and is detailed in Table ‎1. 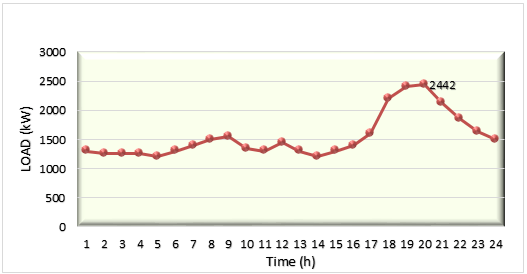 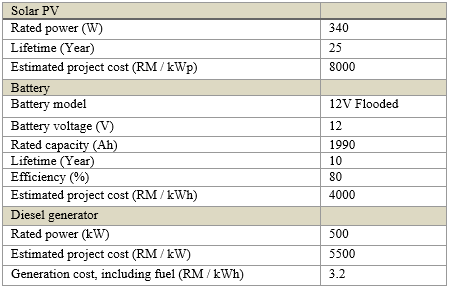 The current cost for a typical PV array is assumed as RM 8000 (around $1,820) per kWp, including the inverter cost. We are aware that the cost per kWp is decreasing yearly. The capacity cost of the flooded lead-acid battery is RM 4000 ($910) per kWh, and includes the operation cost, replacement cost and inverter cost.  Each storage module is rated at 1990 Ah and can store 23.88 kWh. The DG is rated at 500 kW, whereas the cost of diesel is RM 5500 per kW, including building cost and tank cost. The generation cost, using diesel, is RM 3.2 per kWh including fuel cost, operation, and maintenance. Further, the life span of the system components such as solar PV is 25 years and the life span of the battery is 2100 full cycles at 80% DOD, according to the datasheet, which is approximately ten years [11]. The duration of the operation of the hybrid system consisting of solar PV, battery bank and DG is 20 years.

Eight different strategies were considered to design the hybrid system in Perhentian Island. The difference between the strategies is the proportion of the solar PV, as shown in Table ‎2. In an upcoming article, we will discuss the results of the analysis over these scenarios.

Table 2: The percentage combination of PV, BES, and DG

Optimizing hybrid energy systems entails considerations of maximum reliability and minimum cost. The recommendations for a hybrid renewable energy system in the Perhentian Islands in Malaysia are discussed, based on a novel optimization approach using  artificial intelligence tools, include a solar PV, BES, and  DGs as a backup source when the former fail to meet the load demand. Eight scenarios were taken into account to improve the hybrid system. The operation results for this HRES, along with some metrics of performance will be presented in an upcoming article.

This article was edited by Panos Moutis

To view all articles in this issue, please go to September 2022 eBulletin. For a downloadable copy, please visit the IEEE Smart Grid Resource Center.

Vigna K. Ramachandaramurthy (SM‘12) received his Ph.D. degree in Electrical Engineering from the University of Manchester Institute of Science and Technology (UMIST) in 2001. He is presently a Professor in the Institute of Power Engineering, UNITEN. In 2008, he received the IET Mike Sargeant Awad for career achievement. In 2009, he received the Institution of Engineers Malaysia (IEM) Young Engineers Award. Prof Vigna has served as the IET Malaysia Chairman, IET Council Member, Institution of Engineers Malaysia (IEM) Council Member, IET Younger Member Board representing West Asia, International Professional Registration Advisor, Interviewer and Convenor for Chartered Engineering (UK) in Malaysia. Prof Vigna is also a Chartered Engineer registered with the Engineering Council of UK and a Professional Engineer registered with the Board of Engineers Malaysia. To date, he has successfully supervised and graduated more than 100 postgraduate students, with many receiving distinctions. His area of interest includes power systems related studies, renewable energy, energy storage, power quality, electric vehicle and rural electrification. Prof Vigna is the principal consultant for Malaysia‘s biggest electrical utility, Tenaga Nasional Berhad.

Ahmed Altaher (S’14 M’20) was born in Tripoli, Libya. He received his Diploma from the College of Electronic Technology (CET), Tripoli, Libya, and his B.Sc. honors from the University of Grenoble Alps (UGA), France, and his M.Sc. from Bordeaux University, France. He got his Ph.D. degree in electrical and electronic engineering at UGA in 2018 where he was with GIPSA-lab. From 2001 to 2010, he worked in industry as an engineer, in education as a teacher and an inspector and higher vocational education as an assistant lecturer. He is an adjunct lecturer with CET since 2013 and an entrepreneur and a research engineer with S2A2I-lab since 2019. He served as a coordinator for webinars of the IEEE Smart Grid Society and a member of its education committee. His research interests are dependability, safety and cybersecurity of networked systems, diagnostics of cyber-physical systems and industry applications of communication networks.